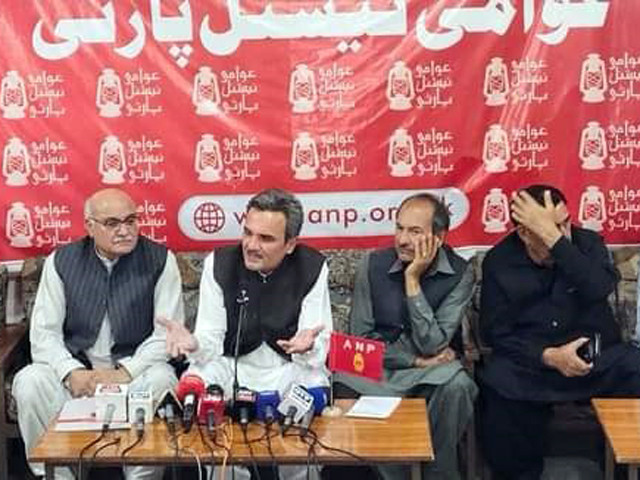 The ANP on Tuesday announced that it is parting ways with the Pakistan Democratic Movement (PDM) in what appears to be the formal beginning of the end of the 11-party opposition alliance, formed with much fanfare in September last year to dislodge the PTI government.

The nationalist party took the decision a day after the PDM issued show cause notices to it and the PPP leadership for seeking support from Balochistan Awami Party (BAP) – a part of the ruling coalition – for securing the coveted position of Senate leader of opposition for PPP’s Yusuf Raza Gilani.

Serious differences emerged between the PPP and the PML-N – the two biggest parties in the alliance – after the former appointed Gilani as Senate opposition leader in apparent violation of what had earlier been agreed upon in a PDM meeting.

Gilani was notified as opposition leader after some smaller opposition parties – including the ANP, the Jamaat-e-Islami and BAP – threw their weight behind him.

Irked by the move, leaders of eight PDM parties on Friday agreed that “show cause notices” should be issued to the PPP and the ANP and the alliance issued the notices on Monday.

"After receiving the show-cause notice, the ANP's political leadership has decided to part ways with the PDM," ANP Senior Vice President Ameer Haider Khan Hoti said at a press conference, held after a meeting of the ANP leaders at Bacha Khan Markaz in Peshawar.

"No one, except for ANP chief Asfandyar Wali Khan, can send us a show-cause notice," he asserted, adding that “the alliance has been hijacked by some political parties."

He said differences emerged between the PML-N and the PPP over the position of the Senate leader of opposition as both the parties nominated their own candidates for the post.

“The PPP raised objections to the PML-N candidate [Azam Nazeer Tarar] but the PDM refused to address these concerns. We supported the PPP’s candidate [Gilani]. However, the PDM instead of trying to resolve these differences issued show-cause notices

“The show-cause is an attempt to dent the political goodwill of the ANP,” he added. Hoti said if the PDM had any issues with the party, it could've asked the ANP for an explanation.

“The PML-N and the JUI-F were also supposed to offer an explanation respectively for supporting the PTI lawmakers in the Punjab Assembly and forming an alliance with the ruling party in Larkana.” The ANP leader said two parties in the PDM tried to push the ANP to the wall.

“The way PDM acted was wrong. We cannot accept the imposition of the agenda of two-three parties on the entire alliance. In this situation we cannot go along with the alliance,” he added.

The ANP leader said he expected that Maulana Fazlur Rehman would take some step as the PDM president. “We know why the show-cause notices were issued,” he added.

Hoti asserted that the party preferred "ties on equal terms”. “The party consulted with its chief [Asfandyar Wali] despite the fact that he was unwell,” Hoti said, while also criticising PML-N supreme leader Nawaz Sharif for not even calling him to inquire about his health.

“The decision was taken after consultations with the federal and provincial leadership of the party,” he added.  A source in the ANP told The Express Tribune that the party would have had to face disciplinary action had it not responded to the notice within the stipulated deadline.

The PPP is also likely to give a sternly response to the PDM show-cause notice as PPP Chairman Bilawal Bhutto has tasked party's senior leaders – including Sherry Rehman, Raja Pervaiz Ashraf, Farhatullah Babar, Nayyar Bukhari – to prepare the draft for the party’s response.

The draft would be sent to Bilawal and PPP Co-chairman Asif Ali Zardri for approval. The PPP has also summoned its Central Executive Committee (CEC) meeting to review the show-cause issue.

According to sources, the party is likely to adopt an aggressive tone in its response, targeting policies of the PDM and PML-N. The PPP leaders would also address a press conference on the issue soon.

In a telephonic conversation with ANP leader Aimal Wali Khan, Bilawal Bhutto on Tuesday regretted the unfair behaviour of some of the PDM parties.

“We will decide our own course of action. Some parties want to impose their own agendas on the PDM” Bilawal reportedly told Aimal who had called him to formally inform about the ANP’s decision to part ways with the PDM.

PPP leader Nayyar Bukhari on Tuesday also issued a statement, saying that the PPP believes in dialogue and peaceful settlement of disputes but it cannot tolerate tyranny and oppression.

“The PDM is a political alliance and not an organization or a company. All the political parties in the PDM have an equal status irrespective of their sizes [in terms of political base and number of seats].”

He said according to the PDM’s declaration, the alliance is bound to follow collective decisions and not the agenda of a constituent party. “The PDM was formed under the PPP’s banner and the PPP is not subordinate to anyone.”

Bukhari suggested that as PDM President Maulana Fazlur Rehman is ill and has suspended his political activities, the alliance can meet under the chairmanship of PDM Senior Vice President Raja Pervaiz Ashraf – who belongs to the PPP – to discuss the crisis.