Pakistan escapes $11b penalty on Reko Diq after new accord: Tarin

Passersby observe the aftermath of a massive road accident and subsequent fire on GT Road near Okara. Photo: express
OKARA:

A man and his three sons were killed after their car caught fire following a collision with a bus during a wedding procession.

The speeding bus reportedly collided head-on with cars of the wedding procession in front of a hall on GT Road in Renala Khurd.

Four people were killed and seven others injured in the accident. Rescue teams rushed the injured to a hospital for treatment.

The wedding procession had come to Renala Khurd from Chunian in Kasur district.

It had just reached in front of the wedding hall on the highway when the speeding bus going from Sahiwal to Lahore went out of the control of the driver and collided with four of the cars.

As a result of the accident, one car caught fire, due to which 50-year-old Zulfiqar, son of Ghani, a resident of Chunian, and his 13-year-old son Abu Huraira, 11-year-old Abu Bakr and nine-year-old Asad were burnt to death on the spot. Zulfiqar's wife and a child who was in the same car escaped unhurt.

Seven people in other cars were injured in the crash.

Rescue workers also shifted the bodies to a nearby hospital.

The bus driver left the vehicle and fled from the scene.

Meanwhile, participants of the wedding procession blocked the road for some time in protest against the accident.

The protesters dispersed after local police officials reached the spot and assured them that the fleeing bus driver would be arrested soon. The death of the children and their father attending a wedding ceremony caused a sense of mourning in the locality.

Rescue 1122 district official in charge Zafar Iqbal said accidents took place on the National Highway almost daily because of speeding and many Libes were lost in them. 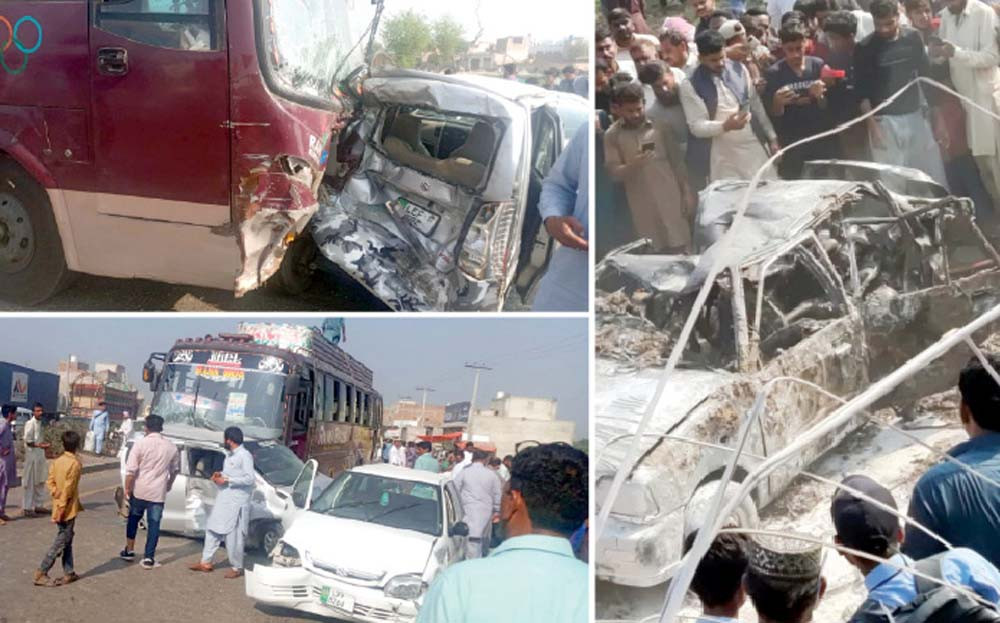 He said the presence of population and wedding halls near the bypass of the highway had increased the risk of accidents.

Okara Motorway Police spokesperson Akhtar Ali Chaudhry said housing colonies were being built along the bypass, where accidents occurred due to commercial plazas and wedding halls.

A fence along the road is also broken in several places.

It is estimated that about 50 people have been killed in accidents in past three months between the cantonment area and Joriyan Bridge, while hundreds were injured.

Punjab Chief Minister Sardar Usman Buzdar expressed deep sorrow and grief over the loss of lives in the accident.

In a,statement, he extended heartfelt sympathies and condolence with the bereaved family. Chief Minister Buzdar directed the local administration to provide the best available treatment facilities to the injured.