Due to Lahore’s growing population and an ineffective sewerage system, complaints of blocked drainage are common in dif-ferent parts of the city in normal days as well. PHOTO: RIZWAN ANWAR
LAHORE:

A plan to build underground tanks before the monsoon season to save the city from getting submerged in rainwater has not been implemented due shortage of funds at the disposal of the water and Sanitation Agency (WASA).

As the season of rains has started, the citizens face the challenge of navigating submerged roads and streets like the past years.

Due to increasing population of Lahore and an old and ineffective sewerage system, complaints of blocked sewage and drainage system are common in different parts of the city in normal days as well, but WASA's infrastructure often collapses during monsoon and rainwater accumulates on the roads. The citizens face severe problems due to the water pooling in several areas for many hours.

WASA surveyed the outskirts of the city and identified 28 places where more water accumulated.

The proposal was sent to Punjab government, which immediately approved it with an estimated cost of Rs2 billion. Initially, an underground water tank, with a capacity of 1.4 million gallons was built at Lawrence Road, which earlier remained inundated for several hours on rainy days. The tank was built last year at a cost of about Rs190 million. The rainwater flowed into the underground tank instead of accumulating on the road and the citizens of the area were relieved.

WASA has also built a tennis court over the water tank, where sports activities are taking place.

After further planning, the Punjab government also approved the construction of the remaining underground tanks, but the funds could not be disbursed in time.

After release of the funds about a month and a half ago, the construction of the tanks on Sheranwala and Kashmir Roads was started. Each of the tanks would store up to 1.4 million gallons of rainwater. 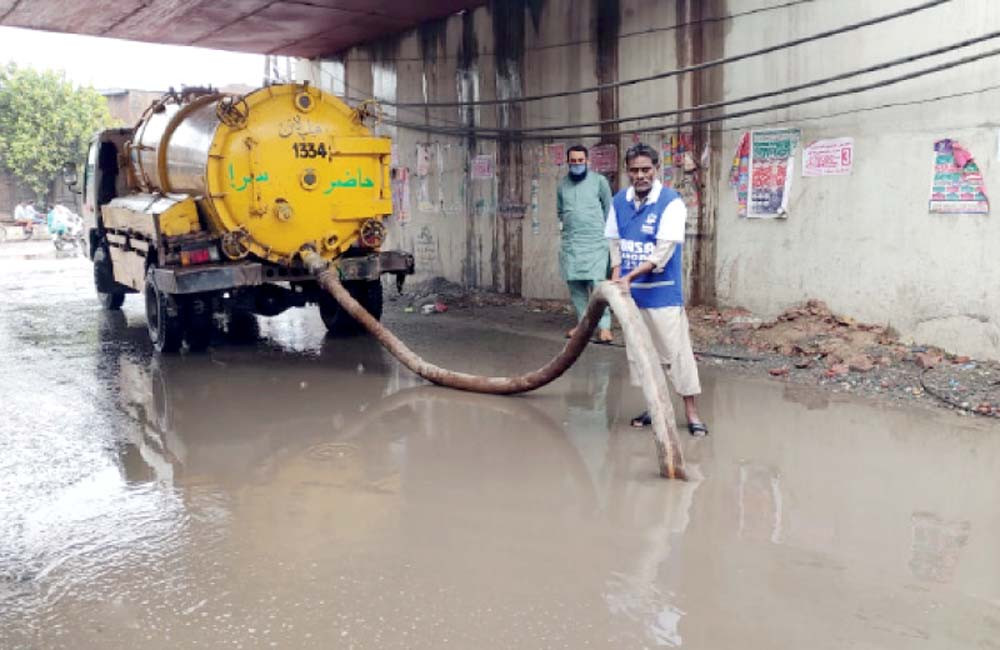 However, the incomplete work at the sites may cause more problems during the rains.

Among the remaining sites, only the PC-I has been prepared for the Gaddafi Stadium underground water tank, while the plans for Tajpura, Cooper Road, Waris Road, Railway Station, Karim Park and Ravi Road are buried in the project files.

According to the Meteorological Department, the monsoon rains will gradually increase after July 15. A series of pre-monsoon clouds has entered Pakistan due to which there is a possibility of rain throughout the coming week, after which a series of heavy rains will soon enter the country.

The department has forecast more rain than routine during the season this year.

When contacted, WASA Managing Director Syed Zahid Aziz said the agency had submitted various proposals to the Punjab government to build underground water tanks to save Lahore from rainwater. The provincial government had provided funds for the construction of Lawrence Road water tank, after which the project has completed.

Work has started after the issuance of tender for underground water tanks on Sheranwala and Kashmir Roads with a capacity of millions of gallons.

The PC-1 for the water tank to be constructed at Gaddafi Stadium has been approved.

The MD said construction work of remaining underground water tanks included in the project will start as soon as the remaining funds are received from the Punjab government.

He said the construction of underground water tanks would not only reduce the problems of the citizens related to rainwater during the monsoon season but also help in improving the declining groundwater level.

Rainwater harvesting project gets the nod