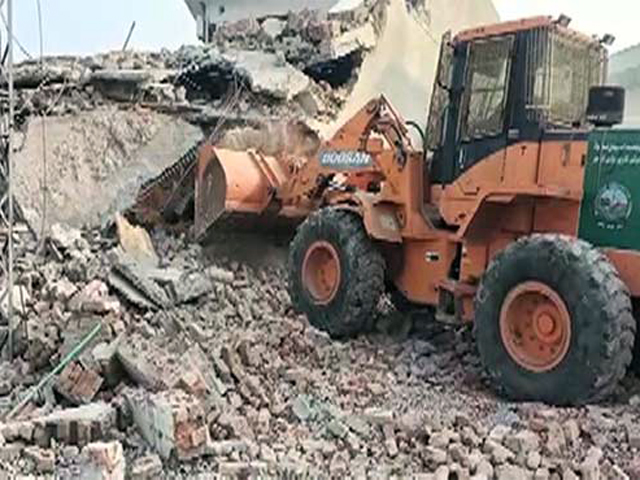 13 shops and several temporary huts were demolished as the authorities aimed to recover 45 kanals of land. SCREENGRAB
LAHORE:

13 shops and several temporary huts were demolished as the authorities aimed to recover 45 kanals of land. Officials claimed that out of 177 kanals of land, only 131 was owned by Khokhars and the remaining was illegally occupied.

Speaking over the issue, the former legislator said the government action was politically motivated as Lahore High Court (LHC) had issued a restraining order on the issue.

In December 2020, the Lahore Development Authority (LDA) had postponed the anti-encroachment operation against alleged illegal wall of Khokhar Palace after facing resistance to avoid any untoward incident.

Meanwhile, PML-N leader Khawaja Saad Rafique, while condemning the action by the administration, said Khokhar brothers were fighting for democracy in the country.

Rafique, while talking to media persons outside Khokhar Palace, said that such attitude of the authorities cannot be tolerated. "No one can stop party leaders and workers to stage protest against the move," he added.

The former Railways minister said that the Naya Pakistan of Pakistan Tehreek-e-Insaf (PTI) was worse than the old Pakistan. "PDM (Pakistan Democratic Movement) will not let this government to complete its term," he added.