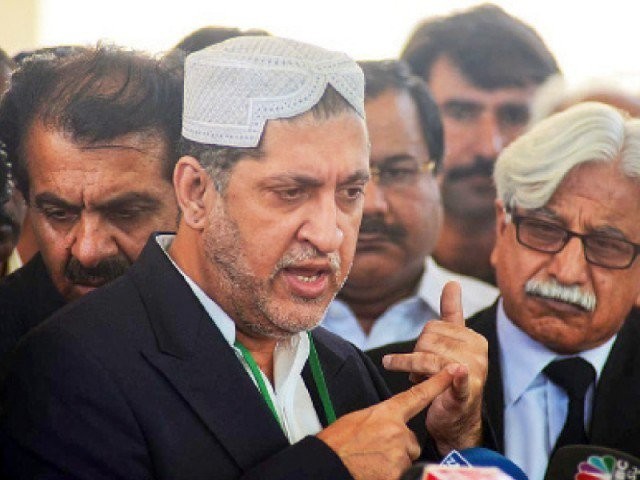 After consulting the senior party leadership, I will decide whether I am going to sit in Balochistan or Islamabad, BNP-M chief says. PHOTO: ONLINE

QUETTA: Balochistan National Party-Mengal (BNP) chief Mohammad Akhtar Mengal has said that his party supports the Pakistan Tehreek-e-Insaf (PTI) at the Centre as it is the “only party that has accepted our six-point demand in 20 years”.

“The country’s rulers have been betraying the people of Balochistan for 70 years. For the BNP-M, these six points are more important than government portfolios and other perks and privileges,” said Mengal while addressing the media on Friday.

The BNP-M chief said, “The PTI has assured us of resolving Balochistan’s crisis. Following the give and take precedent, we have decided to support PTI’s prime minister and speaker at the Centre.”
He said that they had been discussing their six-point resolution from the last 20 years, but none of the political parties showed interest towards Balochistan.

“We have informed the PTI leadership that we can, give or take, wait for one year for the implementation of our six points, but further delay can cause rifts among the BNP-M and the PTI at the Centre,” he added.

To a query regarding his approach in formation of the Balochistan government, Mengal said, “The BNP-M and Muttahida Majlis-e-Amal have formed a political coalition in Balochistan and our decision will emerge in the coming days whether we will join the government or the opposition.

“The BNP-M will not hesitate one bit in sacrificing the chief minister’s slot and all the lavish ministries for the interest of the people of Balochistan.”

On his decision about next political station, he said, “With the consensus of senior BNP-M leadership, I will decide whether I am going to sit in Balochistan or Islamabad.”

The six points laid forward by the BNP-M and signed by the PTI leadership include; 1) the issue of missing persons should be resolved expeditiously with firm commitment and future occurrences should be avoided. National Action plan should be implemented in letter and spirit; 2) demographic identity should be protected in consultation with all political parties and necessary legislation should be enacted to safeguard the rights of Balochistan; 3) share of mineral resources will be renegotiated to the benefit of respective province with full transparency. Refinery of copper, gold and other minerals should be built in Balochistan; 4) major dams must be built in Balochistan so that underground water reserves may be replenished to avoid the risk of migration; 5) six per cent quota of Balochistan in federal services should be honoured and Balochistan quota in foreign services should be adopted regularly; and 6) all Afghan refugees must be repatriated honourably to their country.