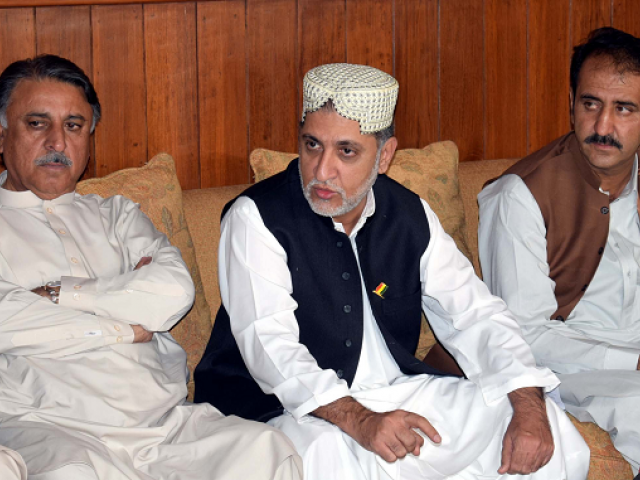 QUETTA: The political scenario in the province is heating up as the Balochistan National Party-Mengal (BNP-M) seeks to form a coalition government, which is contrary to BAP’s objective of having dominance.

The BNP-M also wants its candidate as the next chief minister instead of BAP’s.

BNP-M chief Mohammad Akhtar Mengal said, “Talks are under way with different political parties for formation of a [coalition] government in Balochistan. Two committees have been formed, which are holding negotiations with political parties, including BAP.”

“Jehangir Tareen of Pakistan Tehreek-e-Insaf and Khursheed Shah of Pakistan Peoples Party have contacted me, while we will also hold meetings with Awami National Party chief Asfandyar Wali and Muttahida Majlis-e-Amal leader Maulana Fazlur Rehman,” said Mengal, adding that leaders of other political parties were also contacting the BNP-M.

“Our doors are open for all political parties. BAP President Jam Kamal along with a delegation had visited me,” he added.
Mengal said he had not yet decided as to whether he would go to the Centre or stay in the province.

To a question, he said whether his party joined the government or sat on the opposition benches, it would try to fulfil the promises made to the people of Balochistan at all costs.

To another query, he said there was still time in the formation of the government. “BNP-M would support that party which would help secure the legitimate rights of the people of Balochistan,” he added.

He claimed that election results in some constituencies of the province were announced with a delay of 72 hours and they would raise the issue at all national forums. Over 100,000 votes had been rejected in Balochistan and it was the responsibility of the Election Commission of Pakistan to tell the people about the voting procedure, he added.

On Monday night, Senate Chairman Sadiq Sanjrani and BAP President Jam Kamal met Mengal at Kharan House to convince him to join BAP in forming the next provincial government. However, sources in the BNP-M camp revealed that Mengal formed two committees to expedite the process of contacting other political parties at Centre and in the province to form a coalition government in Balochistan with the chief minister from BNP-M.

Consensus being developed to select next CM: BAP

“The parliamentary session of the party, chaired by Mengal, has decided to form a coalition government in Balochistan with its candidate as the next chief minister,” sources added.

BAP with support of 25 MPAs, including those of ANP, HDP and BNP-Awami, claimed simple majority on Monday.

It appears that the conundrum of forming the next provincial government and selecting a chief minister would likely be solved in the next two or three days.