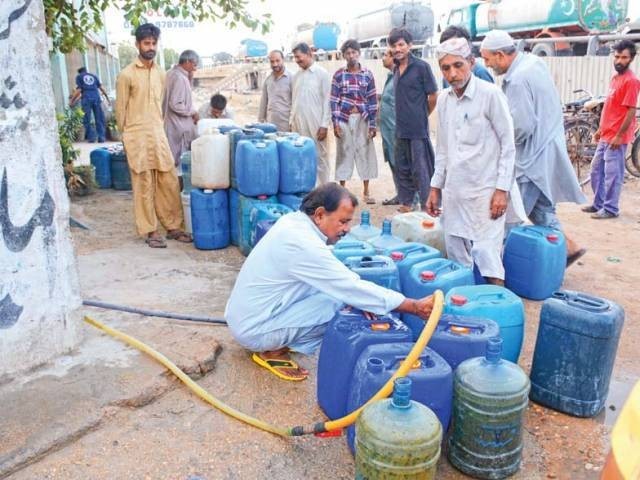 KARACHI: There are two recommendations for a federal water policy lying with the Centre that have yet to be implemented and if such a policy is not coming then the provinces should devise their own policy, urged Pakistan Water Partnership (PWP) Executive Director and Chief Executive Officer (CEO) Sardar Muhammad Tariq.

The former Water and Power Development Authority (Wapda) board member made this suggestion during a panel discussion on water security on the second day of the Third Karachi International Water Conference on Wednesday.

He added that the moment this amount reduces, you start getting into water stress situations, water shortages and water scarcity.

“The surplus water available for Pakistan doesn’t last for more than 30 days.” He elaborated that for the rest of the 335 days, Pakistan is in a semi-drought or drought-like condition.

The PWP CEO said that for an arid country like Pakistan there is a need to have 40% surface water storage. However, he deplored that the country has only 7% storage to counter the problem. He added that this is also reducing due to sedimentation, which leaves a big question mark on the country’s water security.

While speaking about how fragile the country’s water security is, Tariq also told the audience that 85% of the country’s water is transboundary. He said that India has at multiple times threatened to cut off the water coming from Indian occupied areas.

The last issue, in his view point, on which Pakistan’s water security depends on, is climate change. “The glaciers right up to the Chinese border are receding, which in turn is reducing the water flow.”

Talking about what the provinces should do, the water expert advised Sindh to look towards the ocean instead of depending on northern Pakistan. To Punjab, Tariq suggested that it needs more private sector involvement and to address the trans body pollution with India.

Another issue taken up was of water pricing. It was discussed at length by Dr Sanval Nasim, an assistant professor at the Lahore University of Management Sciences (Lums), and panel chair Nisar Memon.

Both panelists stressed the need to introduce a water pricing scheme to better manage the water resources of the country.

Nasim said, “When we look at the other assets we consume, we are paying a price over and above the extraction of resources. However, when it comes to a precious resource like groundwater, we only consider the extraction cost and the actual value of the resource, in terms of scarcity, is completely ignored.”

He said policy interventions are required to address the unsustainable use of groundwater. Another issue he highlighted was of who owns the resource, lamenting that Pakistan has not figured out who collectively owns the right to groundwater.

When asked about how water pricing would be introduced since it may not be a politically viable option and taking into account the small number of people paying taxes, Memon suggested that in bigger cities the levy could be charged directly on societies, such as the Karachi Development Authority and cantonment boards.

Meanwhile, Nasim said the key to translating water pricing into policy would require advocacy and reaching out. “If people are made to realise that groundwater is a basic right and all should own it, then it would work.” He added that there should be an equitable mechanism where water use for small units should be free but if it is being used to generate income or profit then they should be asked to pay.