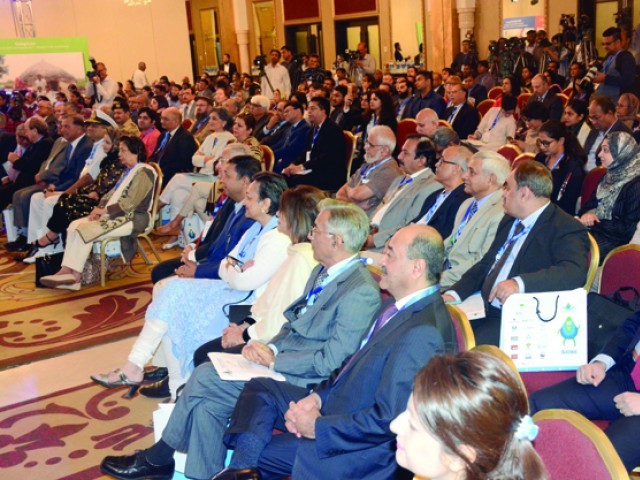 KARACHI: Water is not our top priority. We are in a crisis and water is not reaching the people of Karachi, but issues of terrorism and energy are more serious and immediate problems.

Shifting from the topic at hand, this was stated by Governor Mohammad Zubair when he decided to defend the authorities’ stance on trade relations, terrorism and the energy crisis in the country rather than speak on water management at the opening session of the 3rd Karachi International Water Conference, 2017 on Tuesday. Zubair was the chief guest at the event.

Organised by the Hisaar Foundation at the Movenpick Hotel, the two-day conference, which is held every two years, aims to address water issues in a bold and engaging way.

The opening plenary, ‘What is the future of water in the politically challenged new world order?’, was attended in large numbers by participants from Pakistan, South Asia and across the globe.
A special emphasis was placed by the presenters on the youth, inclusion of women, marginalised groups and poor communities in struggle to better manage our water resources and economy.

“You have to consider things in terms of priority. What the government has recently done is to recognise the problem,” said Zubair, unmindful that the need of the hour was not realisation, but action.

He claimed to be committed to the water problem as a representative of the Centre and believed that his presence for two plus hours at the conference was testament to this commitment as he had not spend such a long time at any other event since he arrived in office.

The governor called for a breakthrough and went on to discuss foreign policy and trade relations with India at a water conference.

Disagreeing with a foreign delegate, who quoted a United Nations report that termed Pakistan’s water crisis as a bigger threat to the country than terrorism, Zubair was of the view that the water problem was not as bad as terrorism.

Hisaar Foundation Board of Governors Chairperson Zohair Ashir gave the introductory remarks and highlighted the major aspects of the foundation’s work, along with the growing need to effectively manage the thinning water resources of Pakistan.

He said the conference has four themes, climate change, science and technology, rights and entitlements and the water economy, with a focus on water economies.

“This is our 3rd conference. There was a time when we were barely able to attract 20 people to our meetings because water isn’t sexy enough a topic to attract people. We wouldn’t have any decision-makers at the meetings, but today, after much struggle, we are getting ahead and expect 500 plus people to attend the conference,” he said.

We are not quite ready yet to be compared to Stockholm and Singapore’s water conferences, but are taking baby steps in the right direction, according to Ashir.

He believed that most of our debates are polarised because we love diving into provincial and national aspects – shaming the government.

But what we don’t realize is that we need to create a diversity of views by taking into account all stakeholders.

An area of disappointment for the foundation was the near to non-existent role of the federal government in the struggle to manage water. “Many officials were invited today from the water ministry, but have not bothered to attend,” Ashir lamented.

Talking about the lack of a water policy in the country, Ashir said the foundation’s think tank developed and published the Recommendation’s for Pakistan’s National Water Policy Framework in 2016, which is now recognised as the first ‘citizen’s’ water policy.

As part of its dissemination campaign, the think tank has held launch sessions of the report in Karachi, Hyderabad, Lahore, Islamabad and Peshawar. As a result of these consultations, governments of Punjab, Khyber Pakhtunkwa and Sindh have started the process of drafting a provincial water policy.

“The people in this country are willing to support you if you are honest,” Ashir said.

He also referred to the Panjwani-Hisaar Water Institute which was launched by Hisaar Foundation Founder Simi Kamal and NED University of Engineering and Technology Vice Chancellor Prof Sarosh H Lodhi. The first of its kind in Pakistan, the institute will works toward understanding the complexities of water. The foundation will provide technical support, Kamal said.

“Our biggest job is to equip the future generation,” Lodhi said.
Kamal emphasized that the time to talk about problems is over and the need for solutions is now. She questioned who has the right to water. “People feel dis-empowered,” Kamal said.

The Human Rights to Water and Sanitation entitles everyone to safe, sufficient, acceptable, physically accessible and affordable water and sanitation services which we are yet to be made available. Increasing scarcity has made water governance and management critical. “Why aren’t banks and financial institutions working in water?” Kamal asked.

Concluding her address on emphasising the role of women, Kamal said when we want something done, it is said give it to a busy person. However, a flip side of looking at it would be to give it to a busy woman and she will get it done.

“Pakistan is out of water, we need to act now before it’s too late,” he said, adding that knowledge was key. Knowledge, if connected to stakeholders, can drive us to working towards water security, believed Cleveringa.

Pakistan and Hungary were the founding fathers of the global water partnership twenty years ago, Cleveringa highlighted, hoping that all dialogue over the next few days would be as ‘transparent’ and ‘clear’ as water.

Ambassador of Hungary in Pakistan Istvan Szabo stressed on transforming the lack of water into the most important political issue of today.

Hungary, he said, pays attention to the optimal use of water and is lucky to have adequate water, but 95% of it comes from outside Hungary.

Engro Corporation Limited Chief Executive Officer and President Ghias Khan talked about the role the private sector can play. He believed that companies needed to educate themselves in the water crisis. “Population growth, climate change, urbanisation, poor management, bad pricing and regulation is affecting supply and the water quality is deteriorating, Khan said.

He highlighted the risks of these factors to the private sector itself and how tackling the issue of water will be beneficial at an industrial level as well.

Giving an example of Pakistan’s gas crisis, he warned of the same about water if attitudes don’t change.

“The need of the hour is to have a water entitlement policy. We have no water pricing system,” said Ghias, adding that water consumption must be reduced by the private sector and a partnership should be made to work on solutions with the government.