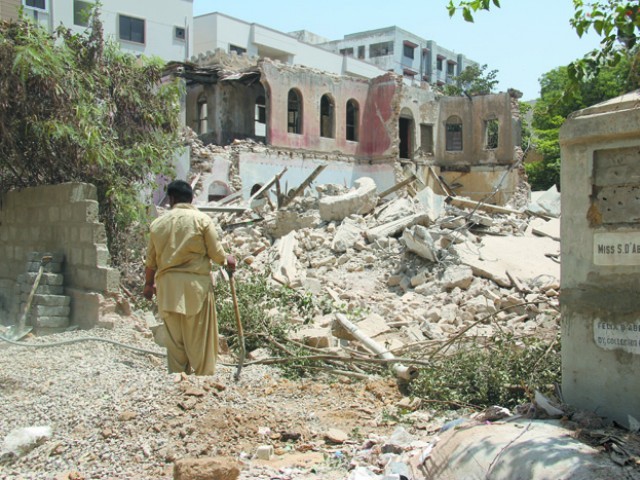 Demolition: Main building of the school, which was residence of the formal principal and founder of the school, late Sybil D’Abreo, was demolished by the builder mafia. PHOTO: AYESHA MIR/EXPRESS

KARACHI: No further construction can ever take place at the site of the 86-year-old Jufelhurst Government School’s demolished building, according to the Sindh Building Control Authority’s (SBCA) bylaws.

Multiple structures in the area around Jufelhurst Government School premises were listed as ‘protected heritage sites’ under the Sindh Culture and Heritage (Preservation) Act, 1994, according to a notification issued by the culture, tourism and antiquities department.

In the wee hours of Sunday, the main building of the school – that was the residence of the formal principal and founder of the school, late Sybil D’Abreo – was demolished by the builder mafia allegedly under the supervision of the local police.

“In case of unauthorised or illegal demolition of a declared protected heritage building, no fresh approval of a building plan on the said plot shall ever be permitted and a fine as permitted by an ordinance, as amended from time to time, shall be imposed by the authority in addition to any other fine that may be imposed by the department under the provision of the Sindh Cultural and Heritage (Preservation) Act,1994, or the Antiquities Act, 1975,” reads Section 15 of Chapter 15, Preservation of Heritage Buildings, of the Karachi Building and Town Planning Regulations, 2002. The section is related to the preservation of heritage buildings.

This was shared by Farida Abdul Ghaffar, an Assistant Professor at NED University of Engineering and Technology’s department of architecture and planning. Ghaffar is also a member of the technical committee of the provincial culture and heritage department.

This law, according to the professor, was drafted to discourage the illegal destruction of heritage buildings. “Only if two such cases of denying building plans over demolished heritage building sites come up, no one will dare to demolish a third heritage site in the city,” Ghaffar explained, adding it is all about the will of implementing the bylaws.

When asked if a replica of D’Abreo’s residence could be constructed over the same plot, Ghaffar commented that it would not be a nice practice. Giving an example of the Quaid-i-Azam Residency in Ziarat, which was targeted with rockets and later rebuilt, the professor said that the reconstruction was opposed by certain architectural schools of thought.

“A replica is tantamount to defacing the site’s history,” Ghaffar said, adding that the demolition of D’Abreo’s beautiful residence is an irreparable loss as the stone and wood used in its construction could not be used now.

Meanwhile, former administrator of the Karachi Metropolitan Corporation (KMC), Fahim Zaman, said there is no need of a replica and the residency of D’Abreo could be restored through the same stones.

In response to Zaman’s comment, Ghaffar shared that the Nasserwanji Building in Kharadar was properly documented and marked and then relocated in Clifton by Indus Valley’s students.
Meanwhile, architect Marvi Mazhar claimed to have done the proper documentation of D’Abreo’s residence.

Though a replica is discouraged, Mazhar said that after a proper analysis of the rubble, the yellow stone used in the construction of D’Abreo back then can be brought under use. “We cannot abandon the site to encourage the builder mafia,” she said, adding that the damage was done but they would definitely rebuild the structure and the Sindh government would bear the cost.

A district and sessions court granted on Tuesday interim pre-arrest bail to two of the suspects in the heritage building demolition case.

The suspects, Abid Qureshi and Zeeshan, along with their accomplices, have been booked for allegedly demolishing a British-era building, located inside Jufelhurst Government School in Soldier Bazaar, on the night of April 8.

On Tuesday, the suspects moved applications for grant of pre-arrest bail.

The East district and sessions judge, Abdullah Channa, granted interim bail against a surety bond of Rs50,000 each till May 2.

Meanwhile, he also issued a notice to the prosecution for arguments on the next hearing.

Senior police officials transferred on Tuesday the investigation of the demolition of the Jufelhurst Government School to the Counter-Terrorism Department (CTD).

The Jufelhurst School, established in 1931 by D’Abreo who had also built her 500-yard residence inside the school boundary, was demolished by the builder mafia Saturday night. The site was declared a heritage site by the Sindh Culture Department a few years ago.

The demolition took the protesters on streets, prompting authorities to take action against the suspects responsible for the demolition, including an official of the Federal Investigation Agency (FIA).

Though a case has been registered, the authorities have yet to arrest the suspects nominated in the FIR.

“The investigation of the case has been transferred from East Zone Investigation to CTD’s Operation I SP Munir Shaikh,” read a notification issued by Sindh police’s spokesperson. “Additional CTD IG will supervise the investigation and submit the report to the Sindh IG by finding the suspects’ involvement.”

An inquiry has also been initiated against Soldier Bazaar SHO Irshad Soomro, who was also suspended following the incident.

*With additional input by Naeem Sahoutara and Faraz Khan