Jufelh­urst School in Soldie­r Bazaar was built by Sybil D'Abreo on her own proper­ty
By YUSRA SALIM
Published: April 10, 2017
Tweet Email 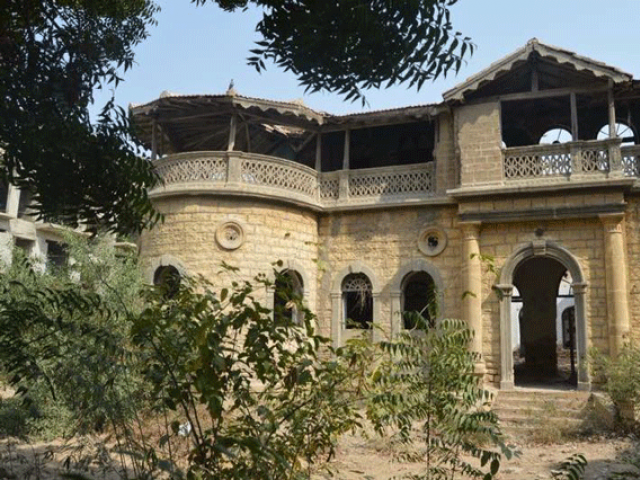 A view of the building before demolition. Sybil D'Abreo, a Goan-Portuguese Catholic woman, built the school on her own property and lived in it until she breathed her last 15 years ago. PHOTO: CM HOUSE

KARACHI: Sybil D’Abreo’s small cosy room is not even close to what it was when she built the Jufelhurst Government School on her own property in 1931. It was reduced to rubble Sunday night.

D’Abreo, a Goan-Portuguese Catholic woman, built the school on her own property and lived in it until she breathed her last 15 years ago. She lived in the main building, which was demolished by the ‘builder mafia’ on Sunday.

The large compound, century-old trees and deteriorating building speak louder than the situation defined in the official documents.

The compound of Jufelhurst School, which covered an area of 5,704 square-yards, is situated on Shahani Street near Gurumandir. The main building of the school was demolished by the builder mafia under the supervision of the local police.

At 12:30am that night, people entered the premises of the school with heavy machinery and tried to demolish the main building, said the primary section headmaster, Amir Jafri. According to him, they called the administration but no one came to their help. The headmaster of the secondary section, Muhammad Shafiq, said that when they called the police on the 15 helpline, they were asked to contact the police station concerned. Only two constables from the Soldier Bazaar police station came and did nothing to stop the machinery and land mafia people, he said.

“The building mafia and machinery left at 2am after the intervention of the neighbours and administration of the school,” Shafiq told The Express Tribune, adding that the ‘goons’ came back again at around 4am and demolished the entire structure. The SHO of Soldier Bazaar police station, Irshad Soomro, was also there while the building was being wrecked, said Shafiq. But he didn’t bat an eye and it seems he was supporting all of it, he added.

Talking to The Express Tribune, Soomro said that the incident was merely a ‘tussle between two parties’. On a question regarding the listing of the demolished building as a heritage site, he said there is no proof of it. Until East Deputy Commissioner Nadim Abro hands them a document of the building listed as heritage sites, they will not be able to take action, he said.

Former parliamentarian from Jamaat-e-Islami, Muhammad Hussain Mehanti, and Pakistan Tehreek-e-Insaf leader Ali Zaidi also visited the site and demanded that an FIR be registered as soon as possible against the builder mafia, the people who operated the heavy machinery and the SHO of the Soldier Bazaar police station.

Meanwhile, Chief Minister Murad Ali Shah has also taken notice of the demolition and sought separate reports from the education and culture secretaries. He vowed to take action against those found responsible, according to a statement issued by the CM House.

The school, since its inception, was run by D’Abreo using a small amount of funds. After the school was nationalised on October 1, 1972, in Zulfikar Ali Bhutto’s era, the school administration also faced a lack of funds. “The building was declared a heritage site,” said Shafiq while talking to The Express Tribune.

He also said that it is a campus school, which has two primary and two secondary schools operating in the same compound. “There are around 1,000 students in all the sections while the building, which has been demolished, was in the use of the girls’ section,” Shafiq said, adding that the building had around 15 classrooms.

Room No 5, which is adjacent to the main building that has been demolished, where a class was conducted on Saturday, was also affected by the heavy machinery. The blackboard still had chalk inscriptions of the words and meanings taught to the students on April 8.

A personal servant of D’Abreo, Gopal, who still lives in the servant quarters of the school with his family, said that he and his extended family have served the late D’Abreo. “Her only relatives who are alive are her brother’s children who live in Chicago and they come to see the land and us once a year,” said bearded silver-haired man.

“Our family has been living here before I was even born,” said a female relative of Gopal who is in her 60s, adding that her father was a servant at the school and she was born in the same quarters. She added that the building was not in a good condition as it caught fire some years ago.

According to an official document of 2015 shared by the school administration, the secretary of culture, tourism and antiquities issued an order for the preservation, conservation and restoration of Jufelhurst School at a cost of Rs30 million. “The renovation work had not started yet,” said Bughio. “The main building was also used as an examination centre and was to be converted into one from April 15 onwards for the science group annual exams but now it this will not happen.”