SBCA says the buildi­ng is unsafe and plans to tear it down.
By Shaheryar Mirza
Published: October 1, 2012
Tweet Email 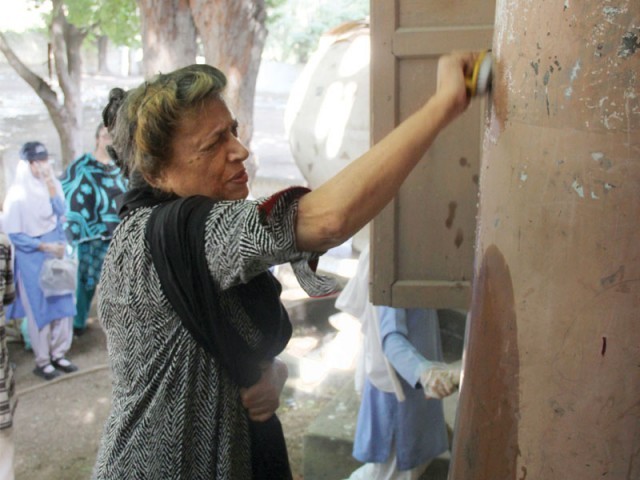 The photo on the left shows the Heritage Foundation’s chairperson, Yasmin Lari, cleaning the walls of Jufelhurst School, which is 81 years old. Its students organised an event on Saturday in which Lari and the former president of the Sindh Building Control Authority, Faheem Zaman, were invited to help clean the school. PHOTO: AYESHA MIR/EXPRESS

KARACHI: A walk through the grounds of Jufelhurst School is a breathtaking exercise through a piece of Karachi’s educational heritage. But the building, which represents the school’s legacy and rich history, has eroded over the years and is now in danger of being eradicated by modern urban development.

Nestled a safe distance away from the hustle and bustle of Soldier Bazaar, the school is spread out over an acre of prime real estate surrounded by high rise apartment buildings. But the world within the school’s boundary is reminiscent of a bygone era: a pre-partition Karachi where trees are taller than buildings.

Sybil D’Abreo built the school on her own estate in 1931 and ran it on a combination of hard work and meagre funds. The school was nationalised in 1974 and has slowly begun to deteriorate because of a lack of maintenance. Because of this, the Sindh Building Control Authority (SBCA) has declared the building unsafe and plans to demolish it.

The Heritage Foundation’s chairperson, Yasmeen Lari, and SBCA’s former director-general, Fahim Zaman, paid a visit to the school on Saturday as students had dedicated the day to clean and revamp the building.

Lari prepared an assessment report and said that instead of being demolished, the school should be preserved and declared a heritage site. “One of the basic principles to declare a building a heritage site is that it has to be built before 1947. [The school] clearly meets this requirement. It is a piece of history that shows how different communities have tried to bring education to Pakistan. But people want to tear it down so they can build an apartment complex and earn profits,” Lari told The Express Tribune. It is the authorities that have allowed the school to deteriorate in the first place.

Zaman said that though the roof has collapsed, the entire structure is still strong and intact. “When a building is unsafe or needs to be demolished, water starts to seep in from the bottom. But this has not happened at the school. The structure is perfectly fine and just needs some rehabilitation as well as a new roof. Its walls are load-bearing and just need to be restored.”

Lari’s report states that there are four structures within the compound. The roofs need significant repair but the walls and windows just need basic repair to be safe for use as a school. Sewage is also overflowing onto a part of the school ground.

The school is home to around 1,200 students in the morning shift and 500 in the evening. Zaman said that ven the alumni don’t want to see the building torn down. The school still receives letters from alumni who graduated 50 years ago, looking for pictures of the school. “There are enough sources of money to preserve the school, such as endowment funds. It’s just a matter of not getting it demolished,” said Lari. Zaman said that according to the law, if a private property has a public thoroughfare for 25 years or more, the property cannot be converted into something else. Lari and Zaman have taken it upon themselves to teach the school’s students, teachers and employees to maintain basic upkeep of the building. They have in a sense adopted the school to help ensure that it is rehabilitated.

“This city breeds violence because its landscape is harsh and unfriendly. This has an effect on people. We have to transform the city’s look by preserving our buildings as well as identity and foster pride through our heritage,” Lari said.

Social responsibility: A power-full favour for the leprosy centre