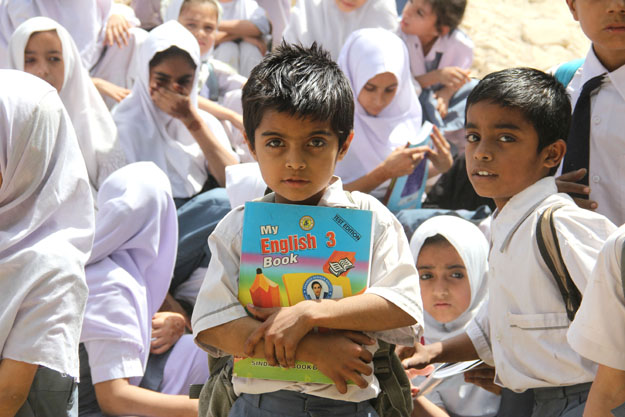 The students used to play hide and seek in the old building. PHOTO: AYESHA MIR/EXPRESS

KARACHI: It was like a castle from the movies, said class four student Areeba Khan, recalling the glory of the principal’s residence at the 5,704 square-yard Jufelhurst Government School premises that was demolished by the builder mafia on Saturday night. Khan and her class fellows who were enjoying their free period remembered how they played hide and seek in the building because no classes were held in it. It had a huge staircase and large windows, she said.

A day after the demolition of Jufelhurt’s principal’s residence, Sindh IG Allah Dino Khawaja nominated AIG Aftab Pathan to conduct an inquiry into the matter. 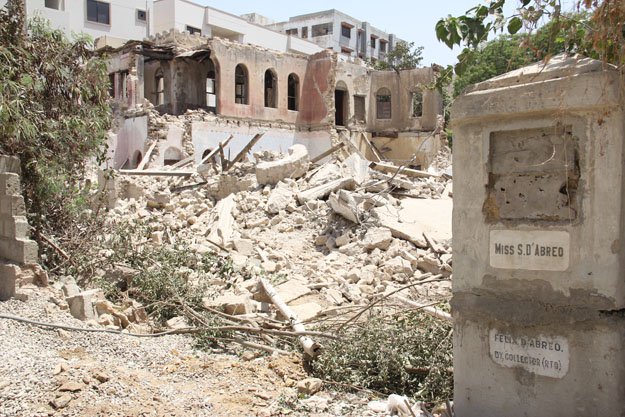 The residence of the school’s founder, Sybil D’Abreo, has been reduced to rubble. PHOTO: AYESHA MIR/EXPRESS

Soldier Bazaar SHO Irshad Soomro was suspended before the investigation even started. Jufelhurst Government School Principal Muhammad Shafiq claimed the SHO and his officers just watched as the builder mafia entered the premises with heavy machinery and demolished the heritage building. AIG Pathan visited the school along with his team and started the initial investigation. “We have to submit a report to the IG within three days for which we have to record eyewitness accounts,” he said, adding that suspending SHO Soomro was part of the investigation. “We have to suspend the officer before doing any investigation,” he said, adding that the initial report was submitted on Monday, while a detailed investigation report on the incident will be submitted within three days.

The AIG said the responsibility of stopping the demolition lay with the SHO but he failed to fulfil that responsibility. AIG Pathan vowed that the three men nominated in the incident’s FIR will not be able to flee the country.

The FIR was registered after School Education Department Secretary Abdul Aziz Uqaili investigated the matter and wrote a letter to IG Khawaja on Sunday, requesting an FIR be lodged against the land mafia and their police collaborators. 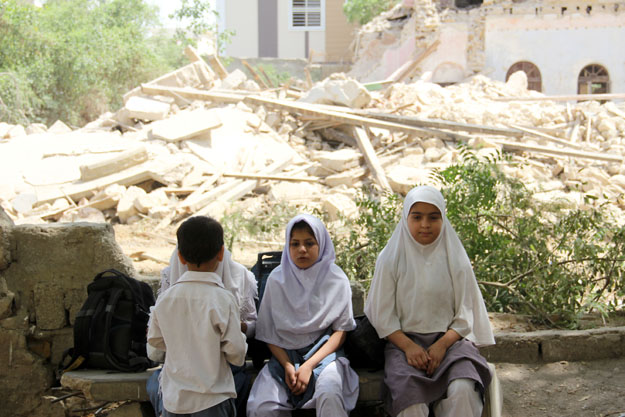 Students sit amid the debris of the building demolished Saturday night by the builder mafia. PHOTO: AYESHA MIR/EXPRESS

The principal’s residence was a declared heritage site but the land mafia has been trying to get hold of the land to build a high-rise building for the last two years, added Shafiq. While visiting the demolished building on Monday, Uqaili said they have ordered the starting of the reconstruction of the damaged boundary wall which is not a part of the heritage site. The other two rooms near the principal house which were also affected will also be reconstructed keeping in view the heritage laws, rules and regulations.

The ceiling of the classroom which was damaged in the demolition will also be reconstructed and if this is not possible, an alternative will be provided to students. The secretary told the media that from the initial inquiry that he and his team has conducted, they learned that a Federal Investigation Agency inspector, Adnan Ali, and two of his accomplices, Muhammad Abid and Zeeshan, claim they also have a stake in the property and were behind the demolition.

“It’s a heritage site worth of billions of rupees and many land grabbers are after it and are being backed by influential persons,” said Uqaili, vowing that the education department will not let this happen. 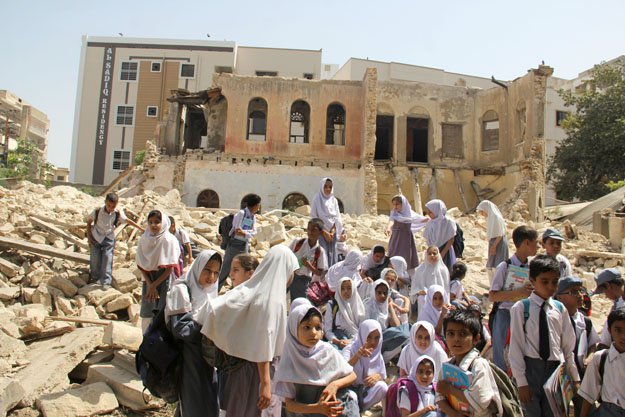 The destruction of the building, which was a heritage site, has left many shocked. PHOTO: AYESHA MIR/EXPRESS

Education Minister Jam Mehtab Hussain Dahar said that those who have tried to demolish certain parts of the school will be given ‘exemplary punishment’ in order to prevent this from ever happening again. “The Sindh chief minister has approved Rs30 million for the renovation of schools that have been declared heritage sites and Jufelhurst will be restored to its original form,” he added.

44 artworks of Bin Qulander on display in Karachi