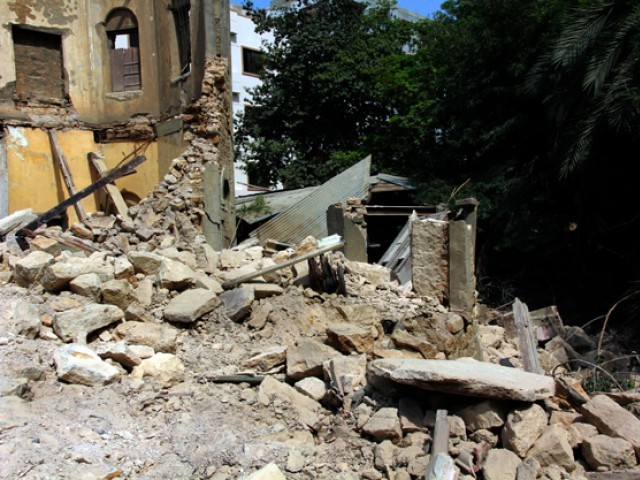 The building demolished on Saturday night was included in the list of protected heritage sites. PHOTO: ATHAR KHAN/EXPRESS

KARACHI: The Sindh government seems to be directly involved in the demolition of the 86-year-old Jufelhurst Government School late Saturday night.

Multiple structures in the area around Jufelhurst Government Girls/Boys School were listed as ‘protected heritage sites’ under the Sindh Culture and Heritage (Preservation) Act, 1994, according to a notification issued by the culture, tourism and antiquities department.

Nestled a safe distance away from the hustle and bustle of Soldier Bazaar, the school is spread out over 5,704 square-yards of prime real estate surrounded by high-rise apartment buildings. But the world within the school’s boundary is reminiscent of a pre-partition Karachi, where trees are taller than buildings.

Sybil D’Abreo – the principal and founder of the school – had her residence adjacent to the school but after the school was nationalised in 1974 the entire property was taken over by the Sindh government and later the school and her residence were listed as heritage sites. However, according to former Karachi Metropolitan Corporation administrator Fahim Zaman, the Sindh government last year declared D’Abreo ‘s residential bungalow separate from the school and renewed its lease with the approval of the Sindh Board of Revenue and Chief Minister Murad Ali Shah.

Dilapidated: Rehabilitate govt school by May

This act, according to Zaman, itself was criminal, as the residential bungalow was part and parcel of the school that has been declared a heritage site and there was no need to separate the residential plot. The property already belongs to the education department after the nationalisation of the school.

D’Abreo ‘s grandsons reside in San Diego, United States, and no one is sure whether they were involved in the renewal of the lease and separation of D’Abreo ‘s plot from the school or not. Ironically, a major portion of the building that was destroyed on Sunday morning included D’Abreo ‘s residential bungalow.

Soldier Bazar SHO Irshad Somro did not lodge an FIR of the incident. While talking to The Express Tribune, he said that the incident was merely a tussle between two parties. On a question regarding the listing of the demolished building as a heritage site, he said there is no proof of that. Until East Deputy Commissioner Nadim Abro hands them a document of the building listed as heritage sites, they will not be able to take action, he said.

No one will be allowed to damage heritage sites, SC tells govt

As for the FIR, he said, no department asked them to lodge it. Meanwhile, Abro told The Express Tribune that there are three claimants of the property who will have to prove in front of the additional deputy commissioner II that they are the owners of the property and they had the permission to demolish it. Two claimants, he said, claim to have 45% ownership of the land whereas one claims to have 10% ownership. Abro shared that in order to demolish any property, one has to obtain permission from the respective district municipal corporation.

However, Abro was not informed that the property was declared a heritage site. He said that if it turned out to be a heritage site, the culprits will be dealt with by the book.

Cleanliness is next to godliness