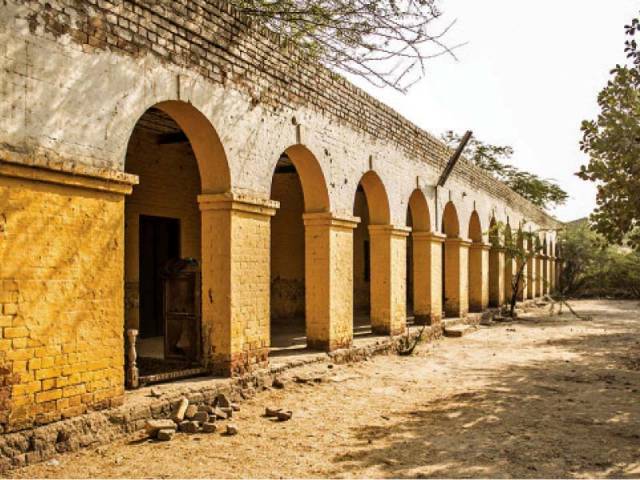 Sir Henry Hollander Eye Hospital was established in 1901 and is spread over 10 acres. PHOTO: EXPRESS

The Shikarpur police arrested on Friday a builder on charges of carrying out illegal constructions on the premises of Sir Henry Hollander Eye Hospital, which has been declared a heritage site.

Dozens of shops and houses were being constructed on the site without the approval of the Sindh Building Control Authority (SBCA) and documents of ownership.

On Friday, the Shikarpur police raided the compound of the historical Sir Henry Hollander Eye Hospital and arrested a builder, identified as Kamber Shar, and stopped the construction work. The builder failed to produce approval of the building plan by the SBCA or the documents of ownership. Therefore, the police in the presence of the Mukhtiarkar sealed all the shops and shifted the arrested man to an undisclosed location.

Sources claimed that, following the arrest of the builder, some influential persons contacted the Shikarpur deputy commissioner (DC), requesting him to release the man. However, the DC refused to do so. He further said that construction work is being carried out at the heritage site without any legal authority, adding that all the illegal constructions will be demolished.

Of old and magnificent: ‘Heritage sites in K-P must be preserved’

Talking to The Express Tribune, Shikarpur DC Sikandar Ali Khushk confirmed the arrest of the builder and sealing of the shops and said that the builder does not have the approval of the SBCA or the documents of ownership. He further said that the matter is pending in the Sindh High Court Larkana bench and, therefore, nobody, no matter how influential, will be allowed to carry out constructions on the heritage site. All the illegal constructions carried out by the builder will be demolished, he added.