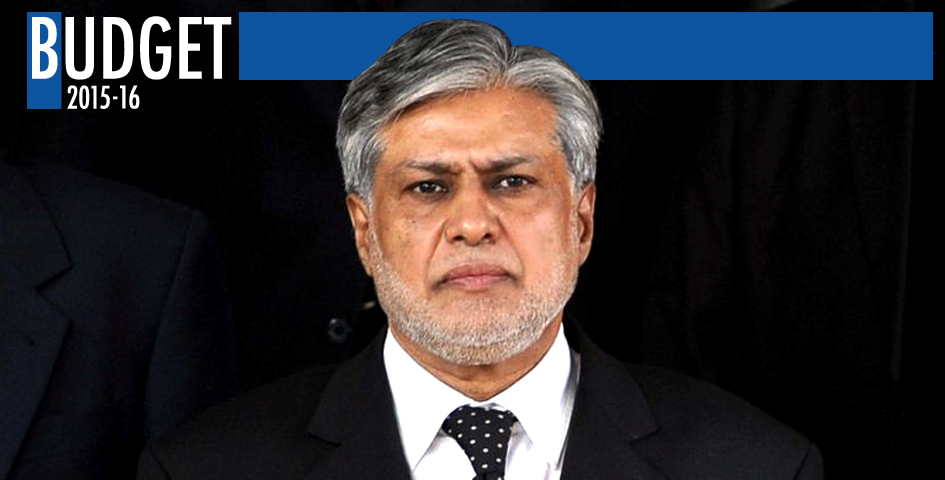 The new budget, with a Rs4.451 trillion outlay, is expected to focus on spurring economic growth and attracting investment.

The National Economic Council has already approved Public Sector Development Programme of Rs700 billion for the next financial year.

The country will target growth next year of 5.5% when it unveils its 2015-16 budget, with historically low interest rates and infrastructure spending expected to fuel the fastest expansion since the global financial crisis. Beginning July, prices of mobile phones will increase by up to Rs1,000 as the federal government has proposed to double the general sales tax (GST) on all types of imported mobile phones. Government expects to receive Rs382b from oil and gas

Keeping in line with the fall in international crude prices, the government has cut the target of revenue collection from the oil and gas sector to Rs382 billion for the next fiscal year 2015-16.

The government announced tax exemptions on import of aircraft, their spare parts, training simulators and equipment used in repair and maintenance of airplanes in a bid to stimulate Pakistan’s flagging aviation sector.

Meanwhile, FBR’s authority to give tax exemption has been revoked.

Further, federal excise duty on cigarettes has been raised by 5%. An additional 10% tax has been imposed on electricity bills above Rs75,000 per month.

Additionally, the government has announced a further reduction of 32% in consumer subsidies, particularly on energy supplies, in the budget for next fiscal year.

Pension has been increased by 7.5%.

Forex reserves to stand at $19 billion by end of year

“Forex reserves will be $19 billion by the end of this year,” the finance minister said. Rs20 billion allocated for special schemes launched by the prime minister. These include provision of laptops, business loans and interest-free loans, among others.

Markup rate of Business Youth Loan Scheme has been reduced from 8% to 6%.

“We are working for the uplift of the agriculture sector and for this purpose a Credit Guarantee Scheme will be initiated,” Dar said.

Dar announced for this purpose Rs600 billion have been allocated as compared to Rs500 billion in the previous year. Fiscal deficit to be contained at 5%

The fiscal deficit is said to be restricted at 5%.

Rs 20.88 billion have been allocated for health.

Rs71.5 billion have been allocated for higher education, 14%  more than the previous year.

Further, Rs3 billion have been allocated for Ramzan package.

Dar announced Rs16 billion has been allocated for Green Line Metro Bus service for Karachi, to be completed by December 2016.

In the new budget, an allocation of Rs3.5 billion is given to Ministry of Interior for raising 28 Civil Armed Forces Wings for ensuring security for CPEC route and Chinese working in Pakistan.

A sum of Rs78 billion has also been given to Pakistan Railways.

The Higher Education Commission has been given Rs20.5 billion, Rs4.5 billion less than this year’s HEC development budget.

An amount of Rs23.2 billion has been given to Kashmir Affairs and Gilgit Baltistan and Rs19.7 billion to State and Frontier Region’s Division.

The government’s planning to implement CPEC projects seems haphazard, as the allocations for CPEC were changed for the third time.

“We are investing a sum of Rs31 billion on water management,” Dar added.

Rs112.28 billion have been allocated for the Water and Power Development Authority for fiscal year 2015-16.

EXCLUSIVE: Amid last-minute changes to accommodate the prime minister, the federal government has allocated Rs700 billion for Public Sector Development Programme for the new fiscal year –up by 29% or Rs158 billion over outgoing fiscal year’s revised budget.

Rs25 million have been allocated for scholarships

Further, Dar announced Rs25 million have been allocated for scholarships.

Regarding the Benazir Income Support Programme, Dar said during 2014-15, it stood at Rs40 billion, however, it was later raised to Rs57 billion and now Rs102 billion rupees are being released for it.

He said the government is working on projects, including those to produce power from LNG.

“Work on dam projects such as Diamer and Dasu and others is also underway.”

“According to an analysis by Goldman Sachs, Pakistan, currently ranks 44th in world economies and will become the 18th largest economy by 2050,” Dar added.

“Standard and Poor as well as Moody’s have termed Pakistan’s outlook positive.”

“Efforts afoot to restrict fiscal deficit to 5% while during the 2015-16 period this will be restricted to 4.3%,” the finance minister said.

Amid last-minute changes to accommodate the prime minister, the federal government has allocated Rs700 billion for Public Sector Development Programme for the new fiscal year –up by 29% or Rs158 billion over outgoing fiscal year’s revised budget. “Government had vowed to wrong economic pundits and our economic ship is safe now,” he said.

“We have to save Pakistan from defaulting,” the finance minister said, adding the country has to achieve macro-economic stability.

“We’ve put a dwindling economy on the path of progress,” Dar further said.

“GDP remained at 4.24 % and depicts persistent growth,” he added.

Further, the finance minister said, “Prices of commodities and oil were controlled.”

“Unusual and prolonged winter season resulted in the damage of rice production and large-scale manufacturing and production saw a decline,” he added.

Prime Minister Nawaz Sharif has arrived at the Parliament.

Budget to be announced shortly.