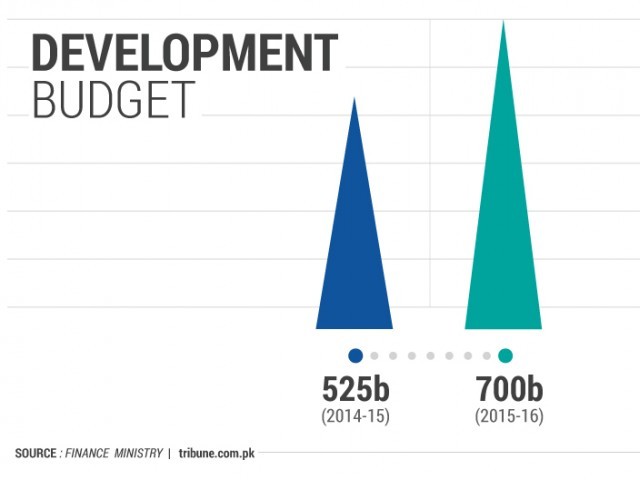 ISLAMABAD: Amidst last-minute changes to accommodate Prime Minister Nawaz Sharif’s directions, the federal government has allocated Rs700 billion for the Public Sector Development Programme for fiscal 2016 – up by 29% or Rs158 billion over the outgoing fiscal year’s revised budget.

While the total number is the same, there is marked difference between the PSDP document that the government unveiled on Friday and the one approved by National Economic Council on last Monday. After the NEC meeting, the Ministry of Planning and Development had to make over Rs50 billion in adjustments to create the fiscal space for two state-owned Liquefied Natural Gas (LNG) fired power plants to be set up at an estimated cost of Rs163 billion.

To make room, it slashed the allocations of China Pakistan Economic Corridor’s proposed budget by Rs20 billion and cut the proposed development allocations of other ministries and agencies, mainly the National Highway Authority.

Compared with the NEC-approved document, the federal government reduced the allocations of federal ministries and divisions by Rs13 billion to Rs253.2 billion in the new budget.

The Water and Power Ministry’s water development projects have seen their allocations reduced from Rs46 billion to Rs31.2 billion. However, the power sector allocation to the Water and Power Development Authority (Wapda) has been increased to Rs112.2 billion in the new budget, including Rs45 billion for the LNG-fired power projects.

The development budget for the Pakistan Atomic Energy Commission (PAEC) budget has also been reduced from Rs59.3 billion to Rs30.4 billion for fiscal 2016.

The government also made a second downward adjustment in the development budget for the National Highway Authority for fiscal 2016. It had originally proposed a Rs200 billion allocation, which was first reduced to Rs184 billion and now the final allocation is Rs160 billion.

It also reduced the allocations for Special Development Programmes in the provinces from Rs30 billion to Rs28 billion.

Pakistan Railways will get a Rs41 billion bailout. The Higher Education Commission has been given Rs20.5 billion, Rs4.5 billion less than this year’s HEC development budget. Kashmir Affairs and Gilgit-Baltistan have been allocated Rs23.2 billion and Rs19.7 billion to the State and Frontier Region’s Division.

The bulk of the development budget will be focused on completing CPEC to keep Islamabad’s commitment to Beijing to complete at least one route of the corridor by later next year.

Despite the focus on CPEC, however, the government’s planning for the corridor projects seems haphazard, as the allocations for CPEC were changed for the third time. China wants to build a trade link through Pakistan aimed at using Gwadar port for strategic and commercial purposes. After a year of controversy, most political parties have finally achieved a consensus on the alignment of the corridor route.

In the new budget, the Interior Ministry has been given Rs3.5 billion to raise 28 Civil Armed Forces Wings to ensure the security of the CPEC routes and Chinese citizens working in Pakistan.

Against the NEC’s approved plan of allocating 12% or Rs20.8 billion of CPEC projects for western route project, which passes through the relatively lesser developed provinces of Balochistan and Khyber-Pakhtunkhwa, the government has slashed the final allocation by Rs500 million to Rs20.3 billion.

Out of five projects that have been designated as western route projects, four are already under construction, one dating back to 1999, the second commenced in 2007, another one was approved in 2010 and one was approved last month. For land acquisition and construction of CPEC projects, the government has allocated Rs10 billion.

The eastern route of CPEC, which will utilise the relatively better developed transportation infrastructure of Punjab and Sindh, will get the lion’s share of this year’s CPEC project allocations at Rs80 billion, though that amount has been cut by Rs15 billion.

Against the NEC-approved Rs60.2 billion for the construction of the 387-kilometre Multan-Sukker highway, the final PSDP document shows a Rs50.2 billion allocation for this critical project. The total cost of this project is estimated at Rs259.3 billion.

The northern alignment’s NEC approved allocation of Rs32 billion has also been slashed by Rs4 billion to Rs28 billion. For construction of 120-km Thakot-Havelian section, the NEC had approved Rs23.5 billion but the government finally gave Rs20.3 billion. The total cost of this project is Rs95.4 billion. For acquisition of land for this project, the NEC approved another Rs6 billion, which has now been lowered to Rs5 billion.

To complete work on Gwadar port, the government allocated Rs6.8 billion for the next year. The government has also given Rs4.7 billion for construction of Eastbay Express way that will link Gwadar with Coastal highway. The total cost of the project is Rs14.1 billion. The NEC approved to give Rs2 billion to Pakistan Railways for conducting various studies to link Kunjerab through rail link.