Being on the wrong side of the endgam­e in Afghan­istan may prove to be fatal for Pakist­an.
By Editorial
Published: September 22, 2011
Tweet Email 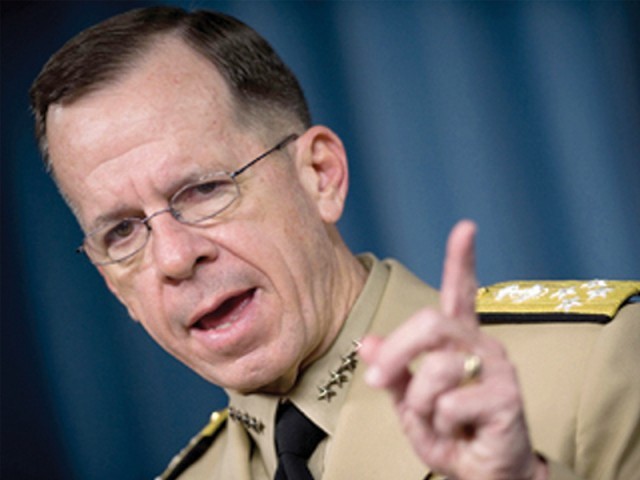 Mike Mullen has intensified the vocabulary of protest by asking the ISI directly to “stop sheltering its proxies as part of its strategy”.

The crisis of Pakistan-American relations has come to a head with the US Senate Appropriations Committee passing a bill which makes all US financial assistance to Pakistan conditional to cooperation against “the Haqqani network and other terror groups associated with al Qaeda”. The money passed by the Senate will be disbursed on the discretion of the Obama administration, which means that there is a consensus in the US institutions on what to do with Pakistan if it doesn’t budge from its position or lack of it on the affiliates of al Qaeda located inside Pakistan.

There is a kind of consensus in Pakistan too in the shape of anti-Americanism among the masses, as nearly 80 per cent of them favour confrontation in place of what they describe as a ‘begging-bowl’ foreign policy. Parliament is unanimous on its stricture on the war on terrorism which is described in Pakistan as America’s war and not Pakistan’s. The pragmatist Pakistanis are put off by the quantum and mechanics of the American assistance under the Kerry-Lugar Act. In a state of collective anger, almost all Pakistanis think Pakistan should permanently sever ties with America and be ready to face the consequences which they think will not be dire because of America’s crisis at home and weakness abroad.

The Kerry-Lugar Act clearly spelled out conditionalities to which the Pakistani military had objected to while it was still a bill. It wanted Pakistan to act against the terrorist pockets within its boundaries and against non-state actors it had used in the past, some of whom had now turned against it and were killing innocent Pakistanis. When the money under the Act began to be disbursed, it was slow, perhaps signalling that the conditionalities were not being abided by.

From 2002 to 2010, $20.7 billion were allocated, out of which $14.2 billion went to the military. The civilian government actually got $6.5 billion. And instead of the much-publicised $1.5 billion that Pakistan is said to receive annually from the US, it actually got on average $480 million every year. This persuades a lot of people who would otherwise favour fighting ‘America’s war’ to say that Pakistan should rebuff the aid package and go its own way. Going one’s own way is not very clear since it is not certain how al Qaeda and its minions would react to this favourable-to-them development. Plus, with an economy in a near-moribund state and heavily-dependent on foreign aid inflows, it is very unclear what will happen if Pakistan does cut itself off from the US.

The fact of the matter is that America is of the firm opinion — regardless of whether this may be entirely true — that Pakistan took no action against its non-state actors, didn’t ban the outfits outlawed by the UN, and let the Haqqani Network stay in North Waziristan and operate across the Durand Line. So the situation now is that the Haqqani network has eclipsed other conditionalities in the Kerry-Lugar Act. The US seems to be blaming the Haqqanis for the September 13 attack on the US Embassy and NATO Headquarters in Kabul, as well as attacks on US soldiers in Wardak province on September 11. US Chairman of the Joint Chiefs of Staff Admiral Mike Mullen has intensified the vocabulary of protest by asking the ISI directly to “stop sheltering its proxies as part of its strategy” and Reuters on September 22 has run a story quoting unnamed “US officials” as saying precisely this.

Pakistan is on shaky ground, not least because it has, at least till recently, provided shelter to the Haqqani network in North Waziristan, or done little to stop it from operating in that agency. The final calculations in Pakistan should be based on realism, not anger. Pakistan has certain experiences from the 1990s when the Taliban were ruling in Afghanistan, which it must re-examine carefully. What the Taliban government did after rejecting Pakistani advice ran counter to the Pakistani values of state and ideology. Being on the wrong side of the endgame in Afghanistan may prove to be fatal.