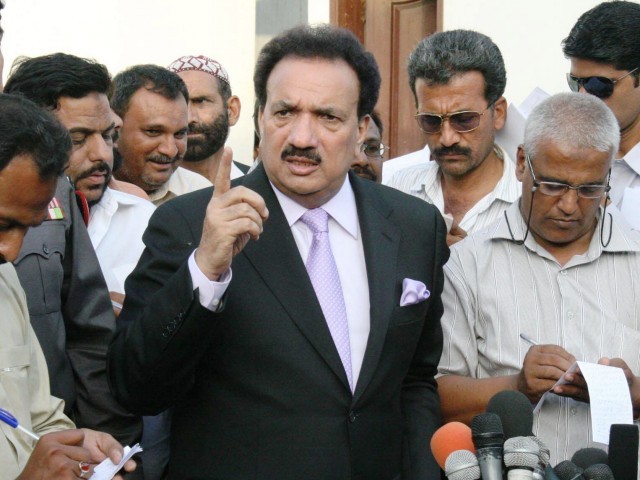 " If you say that ISI is involved in [last week’s Kabul] attack, I categorically deny it," Interior Minister Rehman Malik. PHOTO: EXPRESS/FILE

As the brittle nature of relations between Pakistan and the United States began to unravel at every twist and turn, Pakistan on Thursday rejected US allegations that it was using the Haqqani network to wage a ‘proxy war’ in neighbouring Afghanistan and that the Inter Services Intelligence (ISI) helped the group to carry out last week’s attack on the US Embassy in Kabul.

“I would say a categorical no,” was the foreign ministry spokesperson’s response to US Chairman Joint Chiefs of Staff Admiral Mike Mullen’s accusations that the ISI was using the Haqqani network to further its interest in the region.

Separately in an interview with Reuters, Rehman Malik insisted that Pakistan would not tolerate any incursion on its territory by US forces targeting militant groups, the interior minister said on Thursday, calling for Washington to provide the intelligence Islamabad needs to take them out itself.

Rehman Malik also rejected US allegations that the ISI aids or has ties with the Taliban-allied Haqqani network, allegedly a powerful guerrilla group that straddles the mountainous border areas between Afghanistan and Pakistan.

(Read: Who on earth are the Haqqanis?)

“Pakistan will not allow the boots on our ground, never. Our government is already cooperating with the US …  but they also must respect our sovereignty,” he told Reuters in an interview, insisting that Islamabad wanted US intelligence, not troops, to root out insurgents inside Pakistan.

“If you say that it is ISI involved in that attack, I categorically deny it. We have no such policy to attack or aid attack through Pakistani forces or through any Pakistani assistance,” Malik said.

Despite repeated attempts, no military official was available to rebut the US claims.

“Admiral Mullen’s allegations are very serious,” said an intelligence official, who spoke on condition of anonymity.

“These are pressure tactics … it has been America’s strategy to shift the war theatre,” he insisted.

At her weekly news briefing, Tehmina Janjua denied that the US had shared any evidence linking Pakistan with the Haqqani network. Thursday’s briefing was dominated by the ongoing spat between Pakistan and the US over the issue of the Haqqanis.

“You may have read press reports of an interview by a certain Haqqani spokesperson recently where he has talked about on where they are situated which is not in Pakistan,” she said in reply to a question about the presence of the Afghan insurgent group in the country’s tribal belt.