Penning a heart-touching message on Instagram, the actor advocated for redefining gender norms

Contrary to her often problematic statements, Kangana Ranaut took to her Instagram stories to share her thoughts about “successful leading ladies of the film industry going for younger men”.

While it is very common for older men to marry younger women, it becomes a societal problem when the tables turn. Speaking up about the issue, she wrote, “Growing up, we heard many stories of successful rich men marrying much younger women. For women to be more successful than their husbands, (it) was seen as a major crisis. Forget marrying a younger man after a certain age, (the idea of) marriage becomes impossible for women.”

“(It is) nice to see rich and successful women, (some) leading ladies of the Indian film industry breaking the sexist norms. Kudos to men and women both for redefining gender stereotype”, retorted the 34-year-old actor. 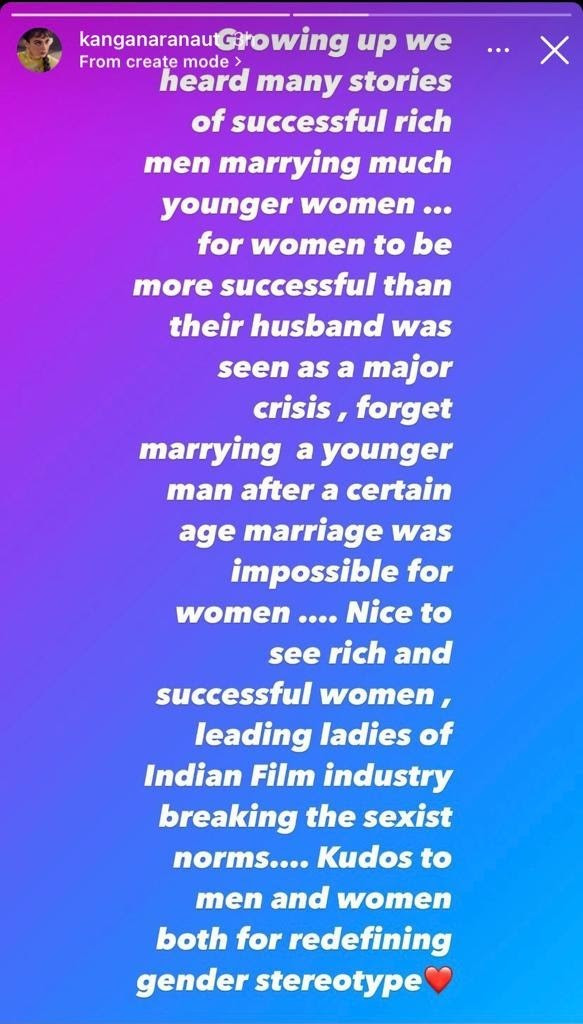 Taking no names in her story, according to speculations by Indian media, the story could be a pass at Katrina Kaif and Vicky Kaushal, given their five-year age difference. However, the Queen star’s message brings more impact than damage this time around. Besides, Katrina is not the only leading Bollywood actress who is getting married to a man younger than her. Priyanka Chopra also married singer Nick Jonas in 2018, who is 10 years younger than her. Aishwarya Rai and Abhishek Bachchan, too, share an age difference of three years. In a recent interview with Times Now, Ranaut also expressed her wish of getting married soon.