The picture shows participants of a protest against Indian atrocities in Occupied Kashmir during Indian Prime Minister Narendra Modi's arrival to attend the COP26 summit, in Glasgow on Nov 2, 2021. PHOTO: EXPRESS
GLASGOW:

Hundreds of Kashmiri and human rights activists from Europe and the United Kingdom gathered at the George Square in Glasgow, Scotland on Tuesday to highlight the Indian atrocities in Occupied Kashmir, as Prime Minister Narendra Modi arrives in the city to attend the COP26 summit.

A protest was organised by Tehreek-e-Kashmir (TeK) Scotland, while another was led by Bailie Hanif Raja, MBE [Member of the Order of the British Empire].

Speaking on the occasion, Hanif Raja said that the rally had been organised to show to the world that Kashmiris condemn Modi’s presence at the climate change conference here.

Modi, he added, will not be spared for his crimes against humanity, which he committed as the then chief minister of Gujarat. Raja observed that Modi has continued to commit the crimes against Kashmiris and Indian minorities as the prime minister of India.

"Indian premier should be isolated from the world for the crimes he has committed against the humanity, with economic sanctions imposed on India until it implements the United Nations Security Council resolutions," he remarked.

President TeK UK Raja Fahim Kayani, who was also part of the protest, said, "Modi government believes in Hindutva ideology, same like the Nazis the world witnessed in the past in Europe."

Kayani recalled that due to Modi's involvement in the Muslim genocide, he was denied access to Europe and the US in a combined decision for a decade, until he becomes the prime minister of India.

"Modi changed the special status of the Muslim majority state on Aug 5, 2019 by abrogating articles A370 & 35A, and imposed a brutal siege on the valley to make Kashmiris’ lives a living hell." 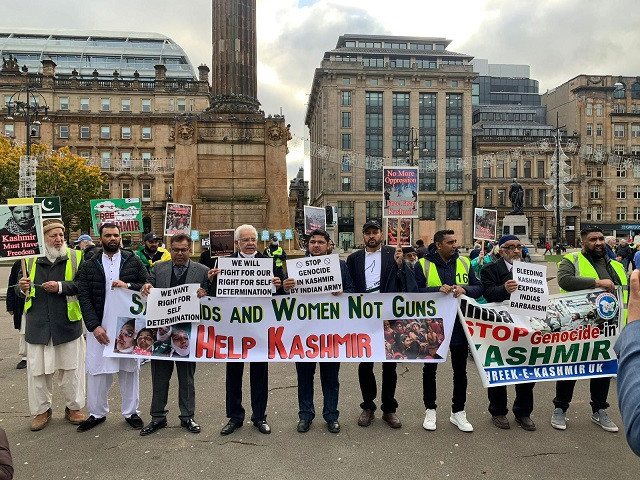 The TeK UK president spoke about the lockdowns and cancellation of media services in Kashmir for the last two years, aimed at controlling the lives of defenceless Kashmiris.

"IIOJK has become an open jail since August 6, 2019 with nearly daily fake encounters and molestation bids against women, whereas the Indian occupation forces receive promotions, medals and cash awards. These crimes are committed with full impunity under the black laws of AFSPA and PSA," he added.

According to the Patron-in-Chief of TeK Scotland, Syed Tufail Hussain, India has also enacted Domicile Act 2020 in IIOJK to bring in the Indians, which wasn't permitted under the State Subject Act 1927.

"Articles 370 and 35A were offered by India in 1956 when the princely state of IIOJK was taken away in the process of gradually making it its part," he maintained.

Hussain noted that India has also been working on geographical changes for some time, but the Domicile Law 2020 is a licence to openly change the Muslim majority into a minority, along the lines of Jammu in 1947. India is giving away Kashmiris' land to its army and politicians to maintain its control.

The TeK Scotland secretary general noted that there was no peace left in India, saying the incidents against minorities were increasing with each passing day. He called upon the world to unite, or, he added, the history will repeat itself and become the reason for another world war.

TeK UK's founding member Khawajah Muhammad Sulieman pointed out that whenever Pakistan approaches India to press it to decide about the plebiscite, the latter tries to avoid it and attempts to threaten the former. He cited Modi's statement "Indian nukes were not made for Diwali” to substantiate his point.

Speaking on the occasion, Stuart Richardson of Stop the War Coalition, Gilbert and Dr Javed Gill urged the world to continue exposing Modi’s brutalities till he repeals the draconian laws and agrees to arrange fair plebiscite in Occupied Kashmir as promised under the supervision of the UN.