Police fire teargas shells on supporters of TLP during a march towards Islamabad from Lahore on October 22, 2021. PHOTO: AFP
LAHORE:

Meanwhile, a TLP MPA from Sindh Assembly claimed that four of their members died due to police torture and firing.

He also alleged that security agencies were harassing journalists covering the agitation.

Sardar said that this was not the first time that the banned group had attacked the police force, they have always challenged the writ of the state and adopted a strategy of violence.

"In 2017, the TLP had staged a sit-in in Faizabad. Can a state give permission that a group takes hostage an entire nation… and they start declaring people criminals and then the criminal be punished by state… and those it declares innocent should be released?" he questioned.

He also questioned that “can the state make its laws and take all internal and external decisions based on the wishes of the banned group?”

The police chief went on to say that two days ago the TLP had martyred two personnel of Punjab police. "Aren't these police personnel not Aashiq-e-Rasool?"

He said that the state will not allow any group to sabotage the law and order of the country. "The security of every citizen of Punjab is our responsibility. We will ensure the implementation of rule of law at all cost."

Meanwhile, Federal Minister for Interior Sheikh Rashid has said that the Punjab government has decided to deploy Rangers in the province for 60 days to maintain law and order and to "deal with a proscribed organisation".

Addressing a news conference in Islamabad, Rashid said it is feared that the TLP may be listed amongst the internationally recognised terrorist outfits, saying "we won't be able to handle their cases if that happens". 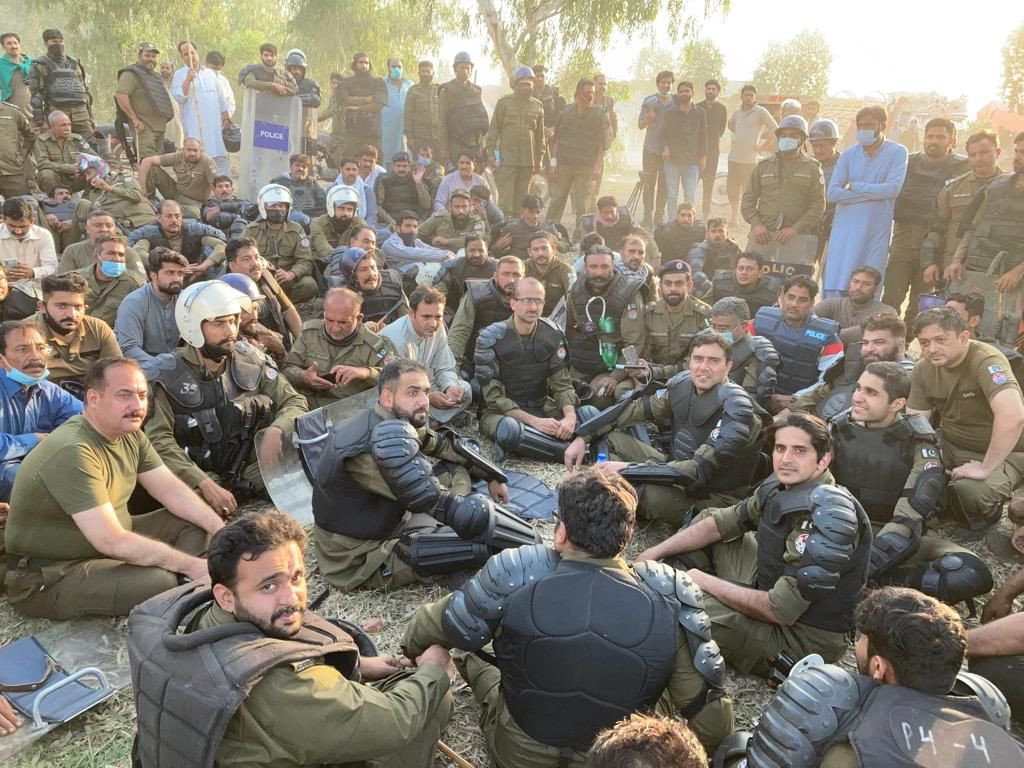 DIG Operations Lahore Sohail Chaudhry, SSP Operations Ismail Kharak and the divisional SPs in anti-riot gear near Muridke to respond to the crackdown efforts to halt the movement of the protesters. PHOTO: EXPRESS

While addressing a presser in the federal capital, Minister for Information Fawad Chaudhry has said that the government has decided to treat the proscribed TLP as a militant outfit and will ensure it met the fate as that of other terrorist organisations.

“A meeting led by Prime Minister Imran Khan was held yesterday, participated by the representative of intelligence and other relevant institutions,” he added.

“A clear decision was made in the meeting not to treat the TLP as a political party at any cost and to treat it as a militant organisation,” Fawad said.

According to details, the protesters will spend the night near Kamonki as they have a plan to move ahead the next day in the noon.

Cellular phone services are being suspended in areas with the base of TLP supporters like Sharaqpur on Jaranwala Road, villages and towns on both sides of GT Road from Sadhoki to Wazirabad.

Announcements are also made in mosques, urging the people to join the protest march.

The fresh clashes between the banned party and the police came as the outfit resumed its march towards Islamabad after talks with the government fell through. The slain policeman was identified as ASI Akbar, a resident of Kasur.

The TLP said the government did not want to negotiate in a serious manner whereas the government said the TLP should let go of its demand pertaining to the expulsion of the French envoy. It said all other demands, including the release of its chief Saad Rizvi, were acceptable.

"Instead of trying to resolve the issue, the use of violence by the government was further complicating the situation," said a TLP spokesperson.

Earlier in the day, TLP Central Committee member Wazir Ali said the TLP march would remain "peaceful", but if the police used force against the workers of the banned outfit, the party would go on a countrywide strike.

In the morning, the party started its march towards Islamabad from Muridke where it had staged a sit-in for the past three days. The decision to halt the march at Muridke was taken after Interior Minister Sheikh Rashid assured them the government would meet their demands.

The provincial government has deployed a large number of police officials on GT Road to stop the 10,000-strong TLP march. It has also dug up trenches on the highway before Chenab River in a bid to stop the supporters of the religious outfit.

As per sources, the Punjab government has also imposed a temporary ban on buses plying on GT Road and placed containers on the road to obstruct the movement of the rally.

Meanwhile, in Rawalpindi, the police have sealed Murree Road for all kinds of traffic. With the closure of major highways in the city, daily life has come to a standstill with citizens facing severe difficulties. All educational institutions and all of Murree Road and adjoining roads have been shutdown.

No leeway for TLP

On Tuesday, Prime Minister Imran Khan chaired a meeting at Bani Gala wherein it was decided not to give any leeway to the TLP.

The premier was briefed on the negotiations with the TLP. It was decided that further talks with the religious outfit would be held only if it ended its protest march.

Rashid, who was leading the team negotiating with the TLP, said at a news conference later in the day that the government had “no reservations” over any of the demands put forward by the religious outfit except for the shutting down of the French embassy and expulsion of its ambassador.

“It was decided [during the meeting] that this demand cannot be accepted.”

He warned that accepting this demand would have consequences.

“As Pakistan is the biggest nuclear force among Muslim countries, conspiracies are being hatched to impose sanctions on us,” he added.

The minister insisted that the country faced “immense international pressure” on the matter.

"You all can see what our economic situation is and France is leading Europe. All European countries are supporting France. Shutting down the French embassy here would affect Pakistan's relations with other European countries.”

The minister had hoped that the TLP would agree to withdraw this demand for which it had given a deadline of November 2.