The hastily called first session of the Pakistan Tehreek-e-Insaf’s fourth parliamentary year couldn’t begin on Friday as the ruling party failed to complete quorum despite taking a break to show strength equal to one-fourth of the total lawmakers.

However, the assembly passed a resolution paying tributes to veteran Kashmiri leader Syed Ali Geelani and condemning the Indian occupation forces’ actions after his passing.

The assembly passed the resolution after National Assembly Speaker Asad Qaiser requested the opposition benches that Minister of State for Parliamentary Affairs Ali Muhammad Khan be allowed to present the resolution before the quorum was pointed out.

Rafiullah also lamented that locking the press gallery during President Arif Alvi’s address to the joint session of the parliament was something that had "never happened even during military rule".

Before the state minister could present the resolution, Qamar took the floor and expressed regret over the session being called at such short notice, and that lawmakers from various parts of the country had to reach the assembly.

Meanwhile, Pakistan Muslim League-Nawaz (PML-N)’s Saad Rafique endorsed the PPP leaders’ statements, adding that the resolution for Geelani was being presented in the House unanimously.

Subsequently, Khan read out the resolution offering tribute to the late Kashmiri leader.

The resolution lauded Geelani’s struggle for Kashmiri freedom, maintaining that he was the spirit of the fight for freedom.

"He was a courageous and brave guide, who dedicated his entire life to raising his voice for the protection of the rights of the people of IIOJK," it stated.

The resolution stated that the entire nation paid tribute to Geelani.

The House strongly condemned the Indian authorities’ action of snatching the deceased’s body from the family, imposing lockdown across IIOJK, and burying Geelani in a heavily surveilled ceremony before dawn.

According to the resolution, Geelani opposed the Indian occupation of Kashmir and the brutalities against Kashmiris. He fought for their rights his entire life. His words (We are Pakistanis and Pakistan is ours) have become a motto for the people of Kashmir. The resolution further noted that Geelani was a role model for the youth and for the fight for freedom.

The House hoped that the people of occupied Kashmir could soon succeed in the quest for their rights. 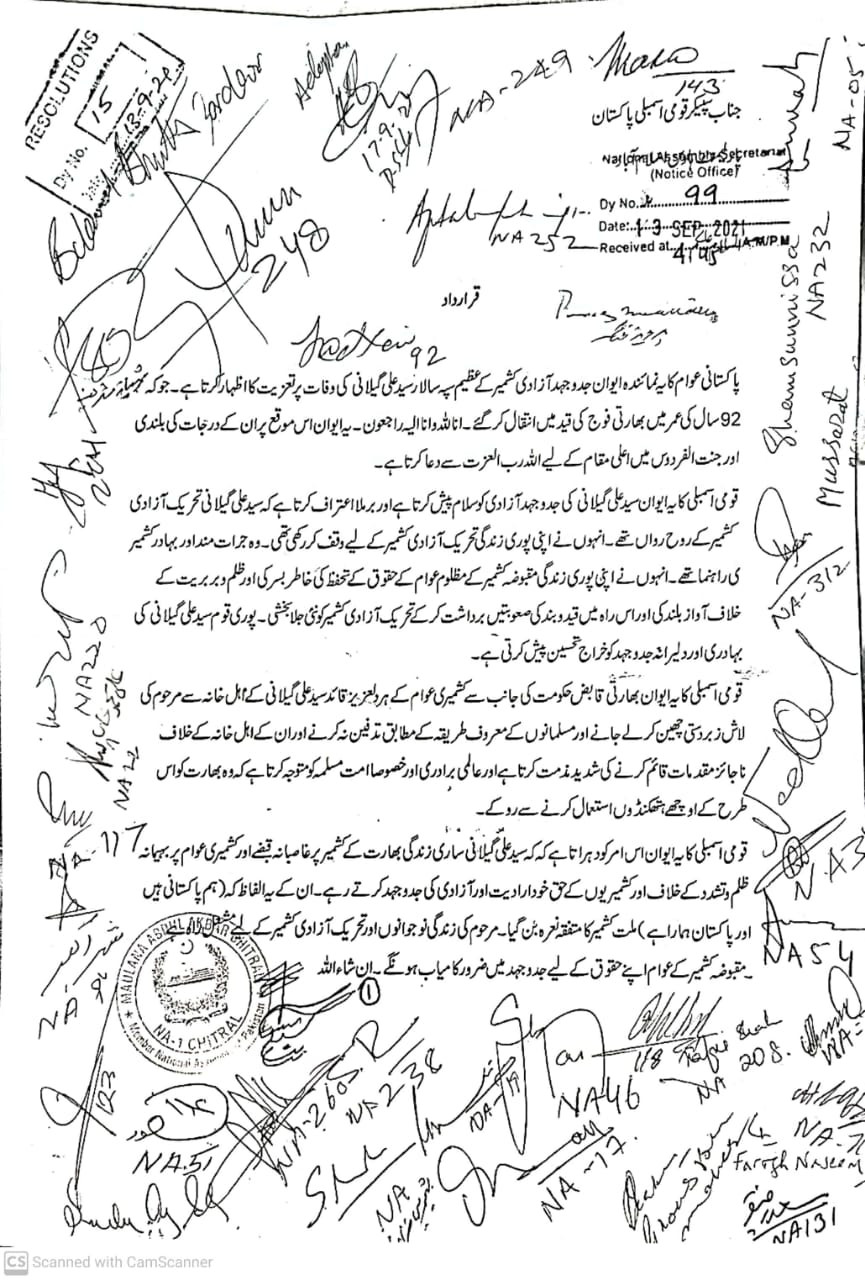 A copy of the NA resolution available with The Express Tribune.