I know there is a higher power, but I can’t say for sure what that is: Saif Ali Khan

If there’s one thing we knew for sure, it was that Minal Khan’s wedding festivities would be star-studded and positively brimming with joy, and it’s safe to say, judging by the pictures from the starlet’s mayun function, the event definitely delivered!

Minal and Mohsin Ahsan Ikram’s mayun took place on Wednesday night, and the evening was filled with yellow, gold and a whole lot of smiles. The event was a traditional affair, with a typical mayun setting, complete with an overload of marigolds. The bride looked no less than something plucked fresh out of the garden in her yellow mayun outfit. 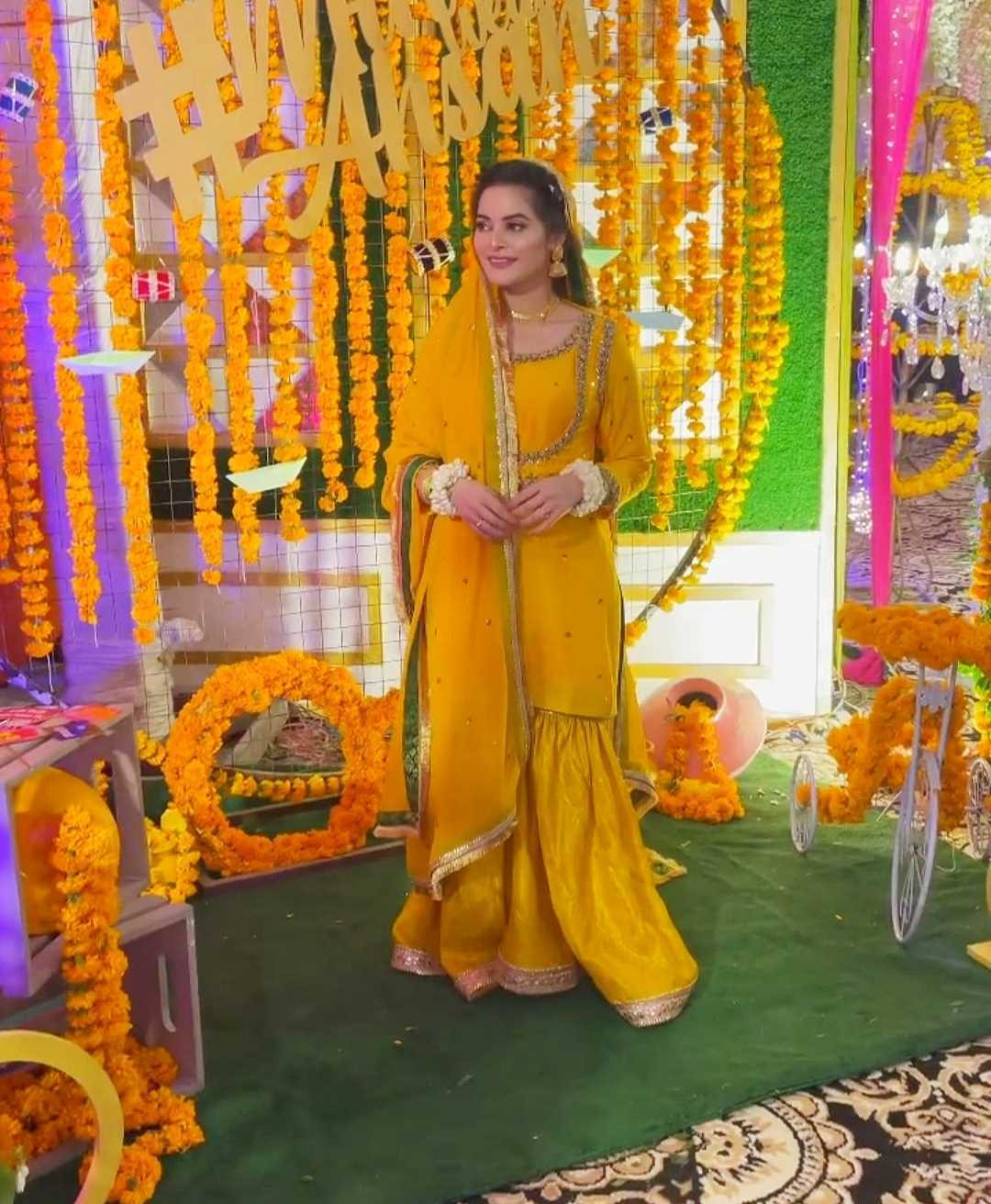 Minal chose to don a kameez and gharara for the function, with the starlet keeping things from going over-the-top by opting for minimal embellishments, perfect for a mayun bride, and setting the stage for the extravagance of the upcoming barat. The actor accessorised the outfit with gajray in each hand and a matching set of gold jhumkas and a necklace.

Ahsan wore a solid grey kurta, adding a colourful waistcoat on top, filled with red, yellow and green. The couple posed for some adorable portraits looking as loved up as ever. 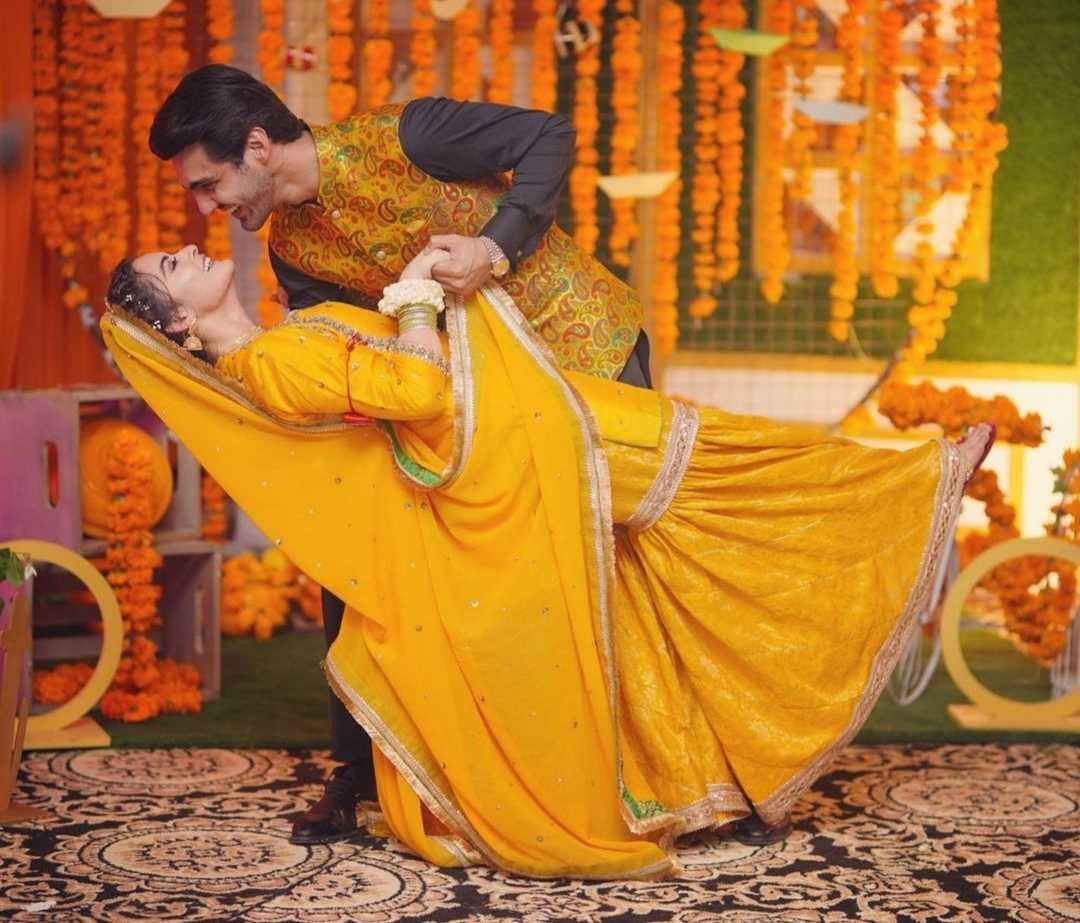 The sister of the bride, actor Aiman Khan, chose to don an outfit very similar to Minal’s, but with fewer embellishments. Aiman’s yellow gharara with green accents was accessorised with hair tied back, an extravagant green and gold choker, as well as some matching bangles. 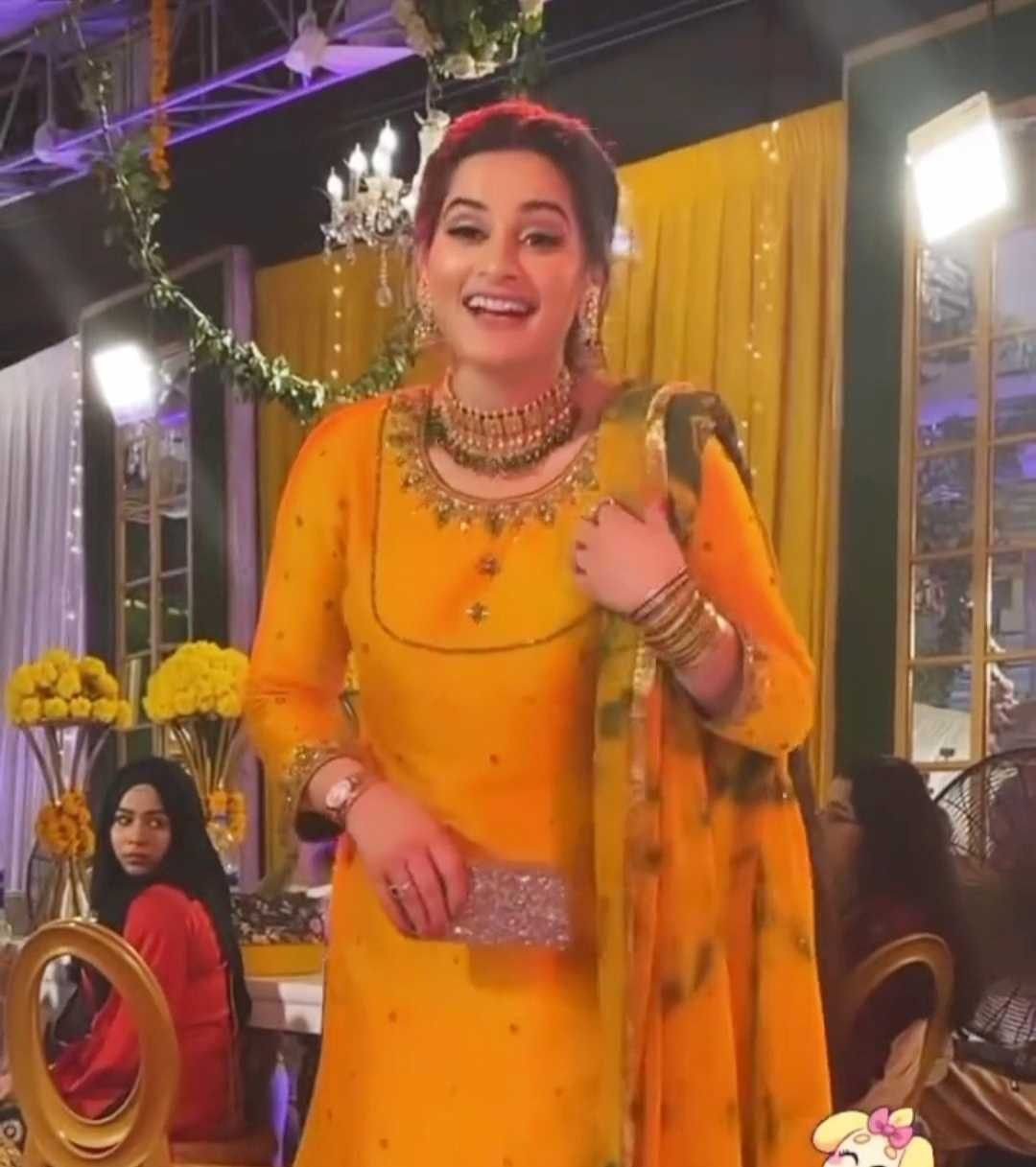 The actor’s husband, Muneeb Butt, went for a black kurta and a blue and gold waistcoat, much like the groom’s. Aiman’s daughter, the adorable little Amal Muneeb, looked every bit the diva in a matching yellow outfit, with a little pink crossbody bag to add an extra layer of cuteness to the look! 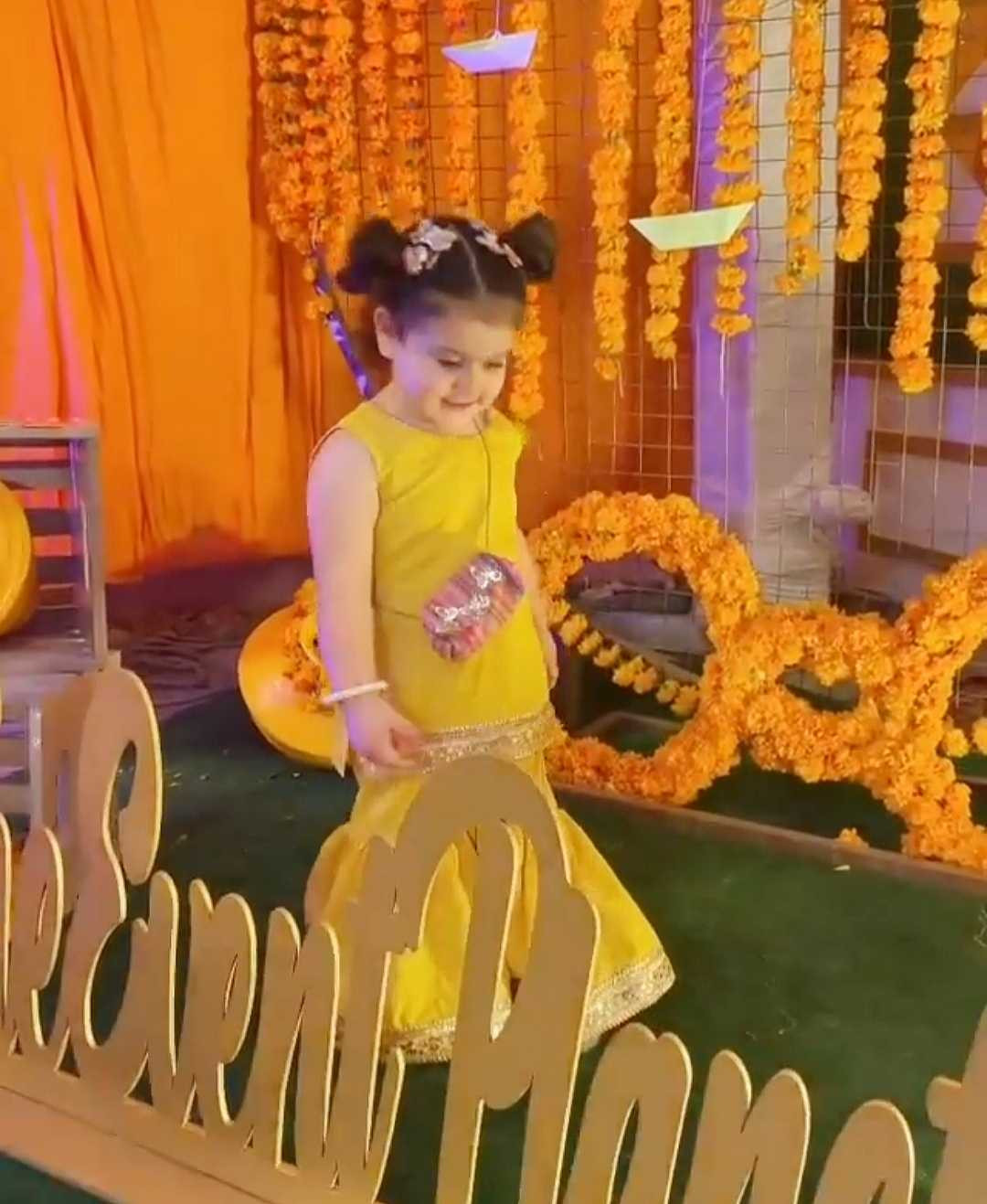 The event was attended by several of Minal’s celebrity friends, including the couple Saboor Aly and Ali Ansari, Kinza Hashmi, Areeba Habib and Amna Ilyas. The friends posed for a group shot with the bride and her family. 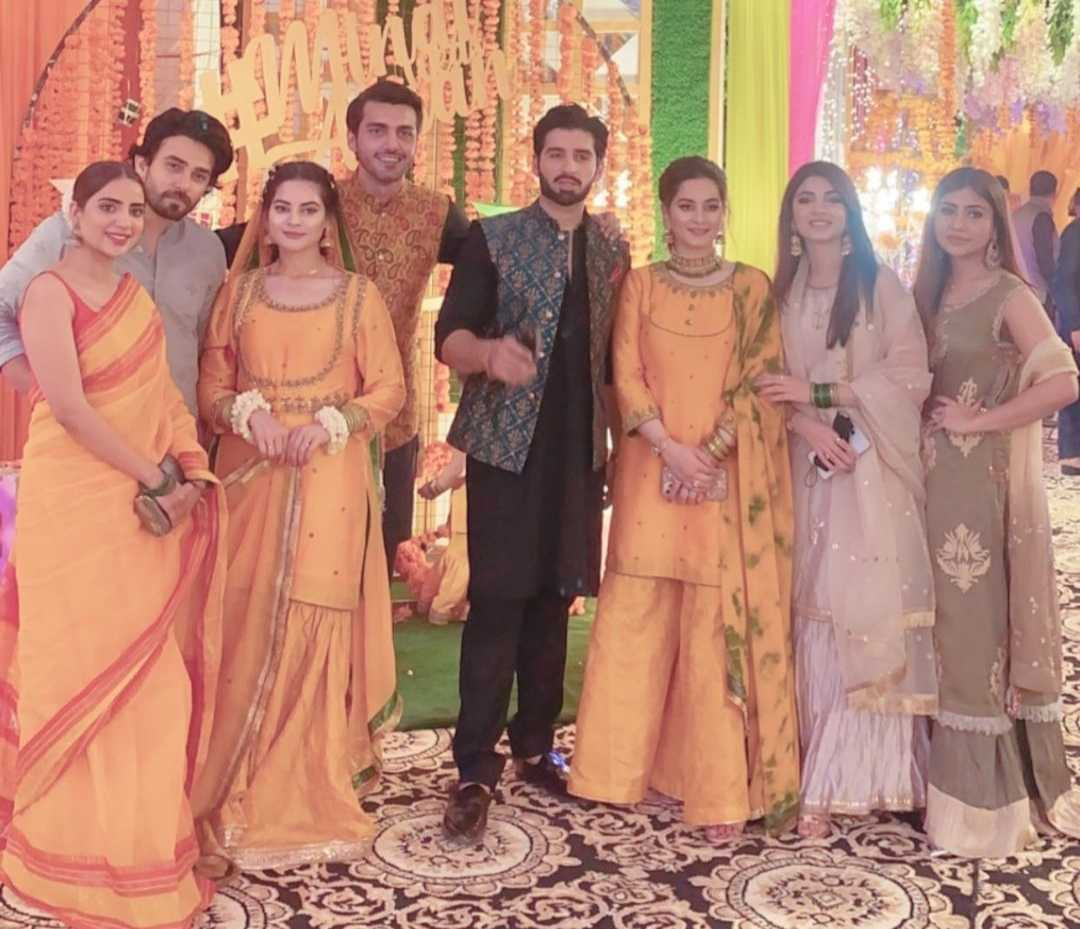 Saboor Aly opted for a gorgeous yellow and orange banarsi sari for the event, wearing her hair in a tight bun, accessorized with gajray, jhumkay and a firetruck-red pout. Her fiance, actor Ali Ansari, complimented the starlet perfectly in a grey outfit. 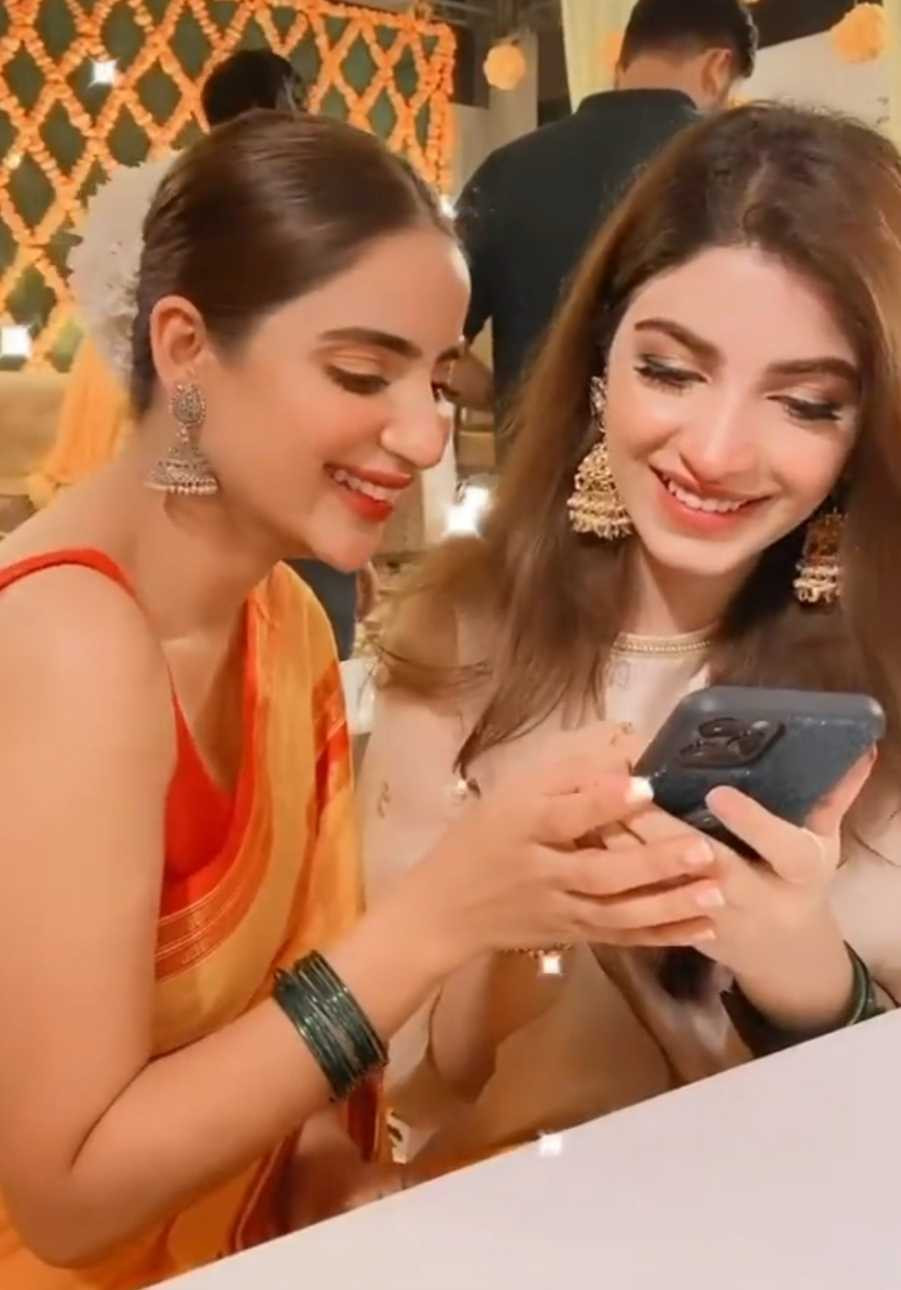 Areeba and Amna posed for pictures while sitting down to perform the rasm, feeding the couple mithai. Amna chose to go with a teal outfit, with Areeba going for a peshwas-style off-white dress with yellow accents, accessorised with a yellow dupatta. Kinza also opted for a silver outfit with gold accents, paired with large gold jhumkas to complete the look. 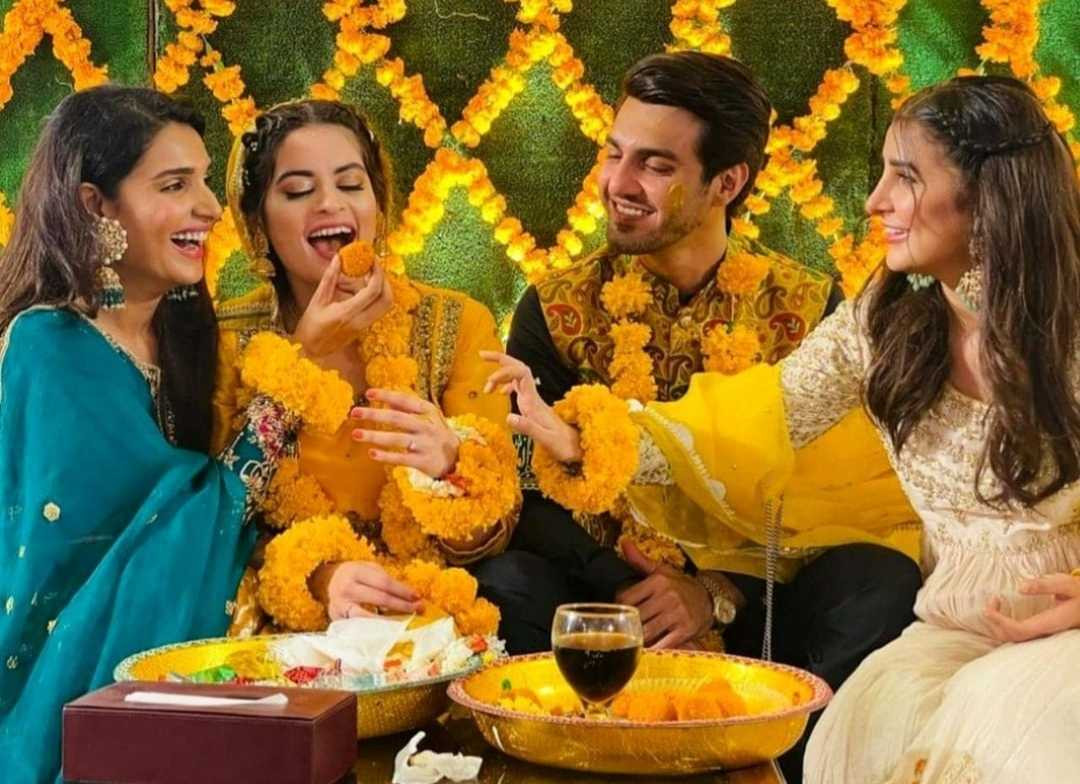 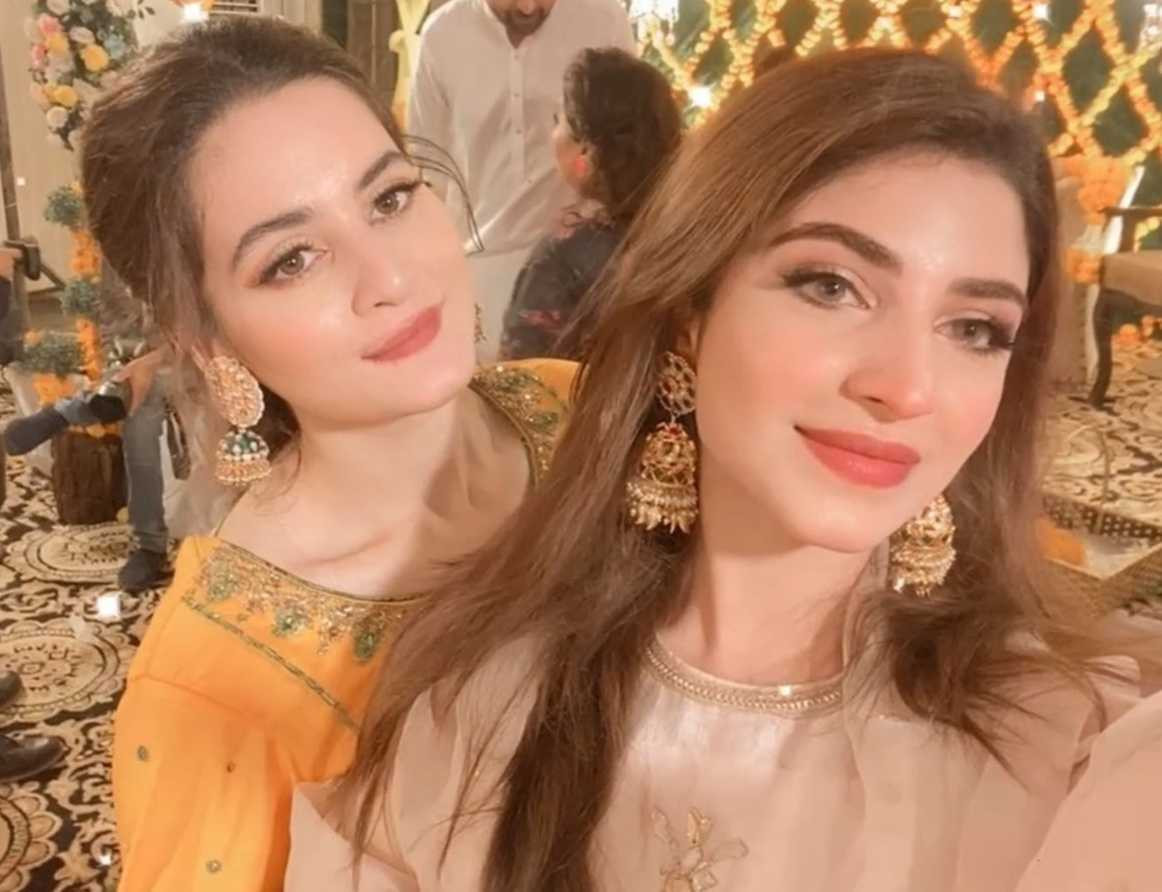