Covid-19 spirals out of control in Asia-Pacific region

Residents line up to receive a vaccine against coronavirus disease (Covid-19) at a drive-through vaccination facility in Karachi July 29, 2021. PHOTO: REUTERS

Amid increased pressure on the existing healthcare system in the province as people rushed to get themselves vaccinated against the novel coronavirus after warnings by the authorities, the Sindh government on Sunday said that it would operationalise 11 more vaccination centres which will work 24 hours.

"In order to facilitate our citizens, #SindhGovt from today will be operationalising 11 more #COVID19 vaccination centres which will be operational 24 hours a day," Sindh government spokesperson Murtaza Wahab wrote on his official Twitter handle along with a notification of the department of health.

He also requested the people to appreciate health workers who are putting in their best effort.

In order to facilitate our citizens, #SindhGovt from today will be operationalising 11 more #COVID19 vaccination centres which will be operational 24 hours a day. Will urge & request people to also appreciate the #HealthWorkers who are putting in their best efforts for all of us pic.twitter.com/3jD0XduX5A

In another tweet, Murtaza said that 87 per cent of hospital admissions were people who had not gotten the Covid vaccine and 13 per cent were vaccinated three days ago.

"Doctors have informed #SindhGovt that generally vaccinated people by & large have had mild symptoms," he added.

I dont have the latest number but 3 days ago, 87% of hospital admissions were people who had not gotten the vaccine & 13% were vaccinated. Doctors have informed #SindhGovt that generally vaccinated people by & large have had mild symptoms https://t.co/pQY1LhfVhV

On Saturday, Karachi's Expo Centre witnessed chaos following the warnings issued by the Sindh government and the National Command and Operation Centre (NCOC) that salaries of the government employees resisting inoculation would be blocked.

Desperate to get vaccinated after a long wait in an endless queue outside the centre, the enraged crowd broke into the building and began vandalising the property.

Reports said glass doors were smashed after which security personnel sustained injuries. A video of the incident went viral over the internet.

Sindh Chief Minister Murad Ali Shah had directed the finance ministry to stop the salaries from July of government employees who refuse to get themselves vaccinated against the novel coronavirus.

Presiding over a meeting of the provincial task force on Covid-19, the chief minister said: "Government employees who do not get themselves vaccinated will have their salaries stopped from July."

Read No treatment for unvaccinated patients

Promptly reacting to the warnings, long queues began snaking down the road outside several vaccination centres on Saturday, which soon spiralled into a riot after “slow and disrupted” administrative procedures. The traffic also remained jammed as more people flooded out of their homes to visit centres.

Meanwhile, a similar eruption of disorder was reported in Clifton’s vaccination centre where people said they were made to wait for several hours and had to struggle through extremely congested road traffics to reach.

Sindh in the last few weeks has witnessed a sharp increase in the number of coronavirus cases as the deadly Delta variant of the virus continues to spread in the province.

On Saturday, the province reported at least 2,772 new coronavirus cases during the last 24 hours, taking the tally to 382,848.

As many as 30 more patients succumbed to the deadly virus as the death toll surged to 6,001. 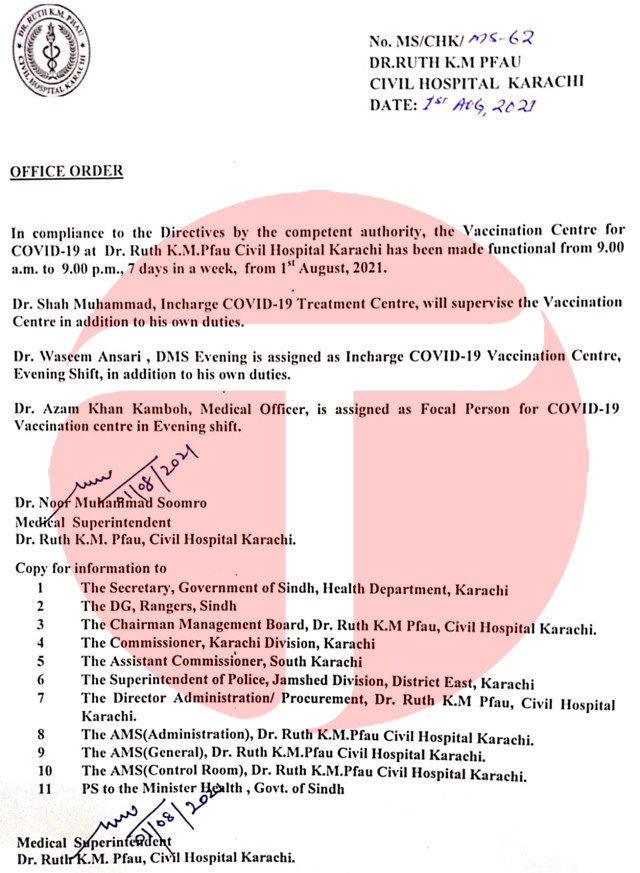 More than 900,000 vaccinations carried out in a day: Umar

Record 778,000 vaccinations carried out in a day: Umar