In a surprising turn of events, actor Alizeh Shah ventured into singing with Sahir Ali Bagga by her side. The starlet featured in an upbeat, Punjabi song titled Badnamiyan, and boy did the response resonate with its name.

The Ehd-e-Wafa actor trended on the micro-blogging site as many slut-shamed her whilst using foul language. This moral-brigade, dubbed her appearance ‘unacceptable’ and ‘offensive’. And despite the fact that her tank top was like any regular sleeveless outfit, users accused her of "crossing all boundaries of modesty.”

So in response to this unrestrained criticism coming her way, Shah took to her Instagram stories and wrote, “I find all memes and criticism amusing. However, the fact that a trivial topic to discuss is now the most trending issue in our country… Instead of becoming a voice for Palestine, what's wrong with our people?" 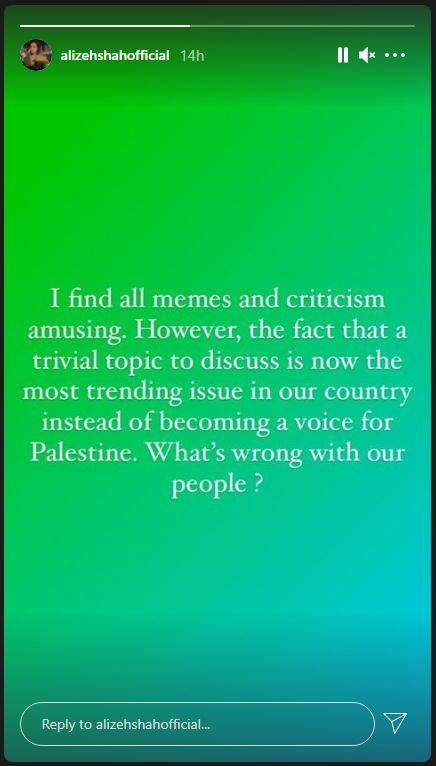 Since her response, however, many users resonated Shah’s sentiments and called out the hypocrisy of those using expletives to school a woman. “Palestine is burning but le Pakistani awam,” shared a netizen with a screenshot of Twitter trends in Pakistan.

Another user complained, “We have so many problems regarding exams, Covid-19, lockdown, Palestine, but our Pakistani public is highlighting Alizeh shah wearing sleeveless shirt. What do you all want?”

We have so many problems at current situation regarding to exams ,covid,lockdown,Palestine, but our Pakistani public is highlighting Alizeh shah wearing sleeveless shirt, آپ سب کیا چاہتے ہو؟#AlizehShah pic.twitter.com/D8eCZ01iKA

One user reminded what Saba Qamar had pointed out earlier, “#AlizehShah will be receiving hate for the next two days for wearing a tank top by the same countrymen whose number 1 trending program in Ramazan was Sexify.”

#AlizehShah will be receiving hate for the next two days for wearing a tank top by the same countrymen whose number 1 trending program in Ramzan was Sexify.

Let’s introspect before we judge, shall we?

Book Review: The Liar’s Truth In The Age Of Misinformation