TLP chief, others booked under terrorism charges; protests erupted across country after arrest of party head on 12th

At least three people have been reportedly killed and more than 100 supporters of Tehreek-e-Labbaik Pakistan (TLP) arrested as the right-wing party's protest entered the second day after the arrest of its chief Sahibzada Saad Hussain Rizvi a day earlier.

The deaths occurred in the Faizpur Interchange area of Lahore. A police constable was also killed by protesters in Lahore, he was deployed at Gowalmandi police station.

At least 40 other police officials have been injured in clashes with the protesters.

The Lahore police have registered a case against the TLP Chief Saad Rizvi and others under terrorism and other charges. 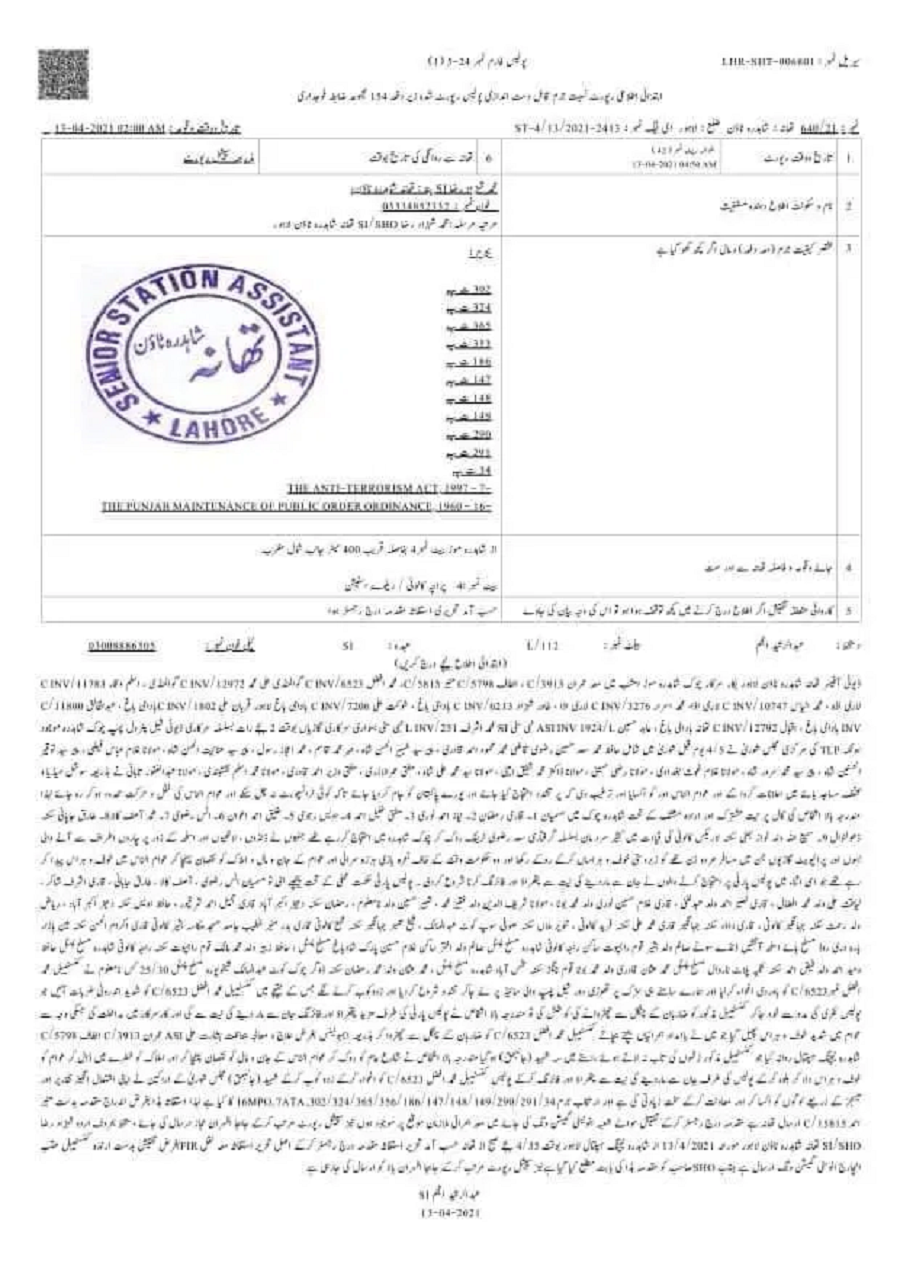 Amid sporadic violent clashes between protestors and law enforcement agencies, a significant number of the country's major arteries remained blocked on Tuesday. The blockades have paralysed business in almost all major cities.

In a statement, the spokesperson for the party, Tayyab Rizvi, said the protests will not be called off till the "French ambassador is deported". He added that more party workers are arriving at areas from where other supporters were earlier arrested by law enforcement officials.

'Miscreants to be dealt with force'

The federal government has reportedly decided to deal sternly with the elements creating unrest in Islamabad.

The decision was reached at a meeting held at the interior ministry this afternoon, led by Interior Minister Sheikh Rashid, Minister for Religious Affairs Noor-ul-Haq Qadri and officials of the law enforcement institutions. Inspector General (IG) Punjab police joined those in attendance through a video link.

Mulling upon the ongoing situation, the participants agreed to not let anyone take the law into their hands, and deal strongly with those doing so.

The interior ministry also issued directions for suspending internet services in the sensitive areas of the federal capital. The services will remain suspended in Taramri, Faizabad, T Chowk Rawat, Expressway, Athal Chowk and Bara Kahu for the next 24 hours.

An important meeting of Punjab's Provincial Committee on Home Affairs was also held under the chairmanship of Law Minister Raja Basharat. The meeting also ordered the deployment of Rangers along with police at 16 sensitive locations of the provincial capital.

It was decided in the meeting that whoever takes the law into his hands will be arrested immediately and a case will be registered against him. The deployment of the Pakistan Army was also discussed during the meeting.

After nationwide protests broke out after Tehreek-e-Labbaik head Saad Rizvi was taken into custody, footage of him being escorted into a police vehicle by security forces has gone viral.#etribune #SaadRizvi #TLP

The paramilitary troops have also been deployed in Islamabad for the security of the Red Zone, diplomatic enclave and all important government buildings in the federal capital.

In Islamabad, Murree Road is closed to all types of traffic and Bara Kahu is also blocked as the protesters have barricaded it with trucks.

In Karachi, traffic flow remained suspended due to sit-ins as well. According to the traffic police spokesperson, the protesters have staged a sit-in at Orangi No. 5, Baldia Hub River Road, Kornagi No. 2. The traffic police have requested the citizens to take an alternative route.

Motorways were reopened at 5 am and normal traffic flow resumed.

At least five policemen, including DSP City, were injured in clashes between protesters and police last night.

Meanwhile, an important meeting of Punjab's Provincial Committee on Home Affairs was also held under the chairmanship of Law Minister Raja Basharat.

The meeting ordered the deployment of Rangers along with police at 16 sensitive locations of the provincial capital. 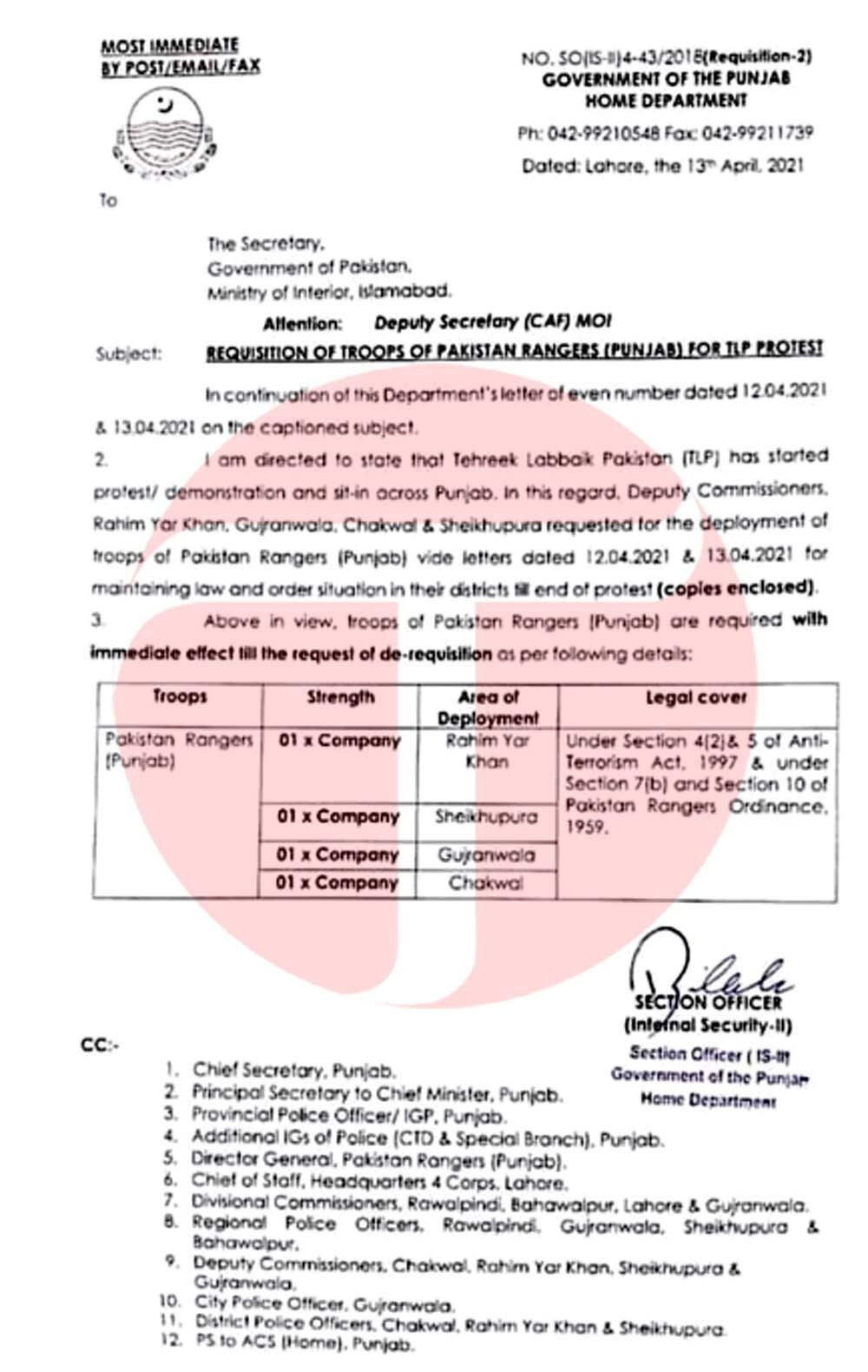 In Peshawar, the city’s main GT Road turned into a battle filed after TLP workers clashed with police and refused to disperse.

Police fired tear gas and detained 35 workers of the religious party and shifted them to unknown location.

SSP operations Peshawar Abbas Majeed Marwat said the police were compelled to take strict action against the protesters after they refused to leave after negotiations.

The TLP has been demanding the expulsion of the French ambassador over the publication of blasphemous caricatures. In November last year, the party staged a sit-in in Rawalpindi, which ended after an agreement with the government.

The TLP announced on November 17 that the government had accepted all its four demands. The TLP had released a copy of the handwritten agreement, carrying signatures of Qadri, then interior minister Ijaz Shah and the deputy commissioner, Islamabad.

The agreement said that the government would take a decision from the parliament regarding the expulsion of the French ambassador within three months, will not appoint its ambassador to France and release all the arrested workers of the TLP.

Army chief awarded Order of the Union Medal by UAE