PM Imran gets vaccinated against Covid-19

The Election Commission of Pakistan (ECP) has called a meeting of its committee formed to review possibilities of using technology in future Senate elections tomorrow (Friday).

"The meeting of the committee constituted to review the possibilities of use of technology in Senate elections and draft recommendations will be held on March 19," said a statement issued by the electoral authority on Thursday.

The meeting shall take place at the ECP secretariat, with additional secretary (admin) Manzoor Akhtar Malik in chair, the communique added.

A day ago, March 17, Minister for Science and Technology Fawad Chaudhry said that the government was in the process of making the electoral system fully automated.

"We are working on shifting the electoral system from manual to a fully automatic one," the minister said during a media briefing held after a cabinet meeting in Islamabad, with Prime Minister Imran Khan in chair.

"It will help address the concerns of political parties in general," he added.

The minister had reiterated that Prime Minister Imran Khan was making efforts since the beginning to introduce reforms in the electoral process and make it transparent.

Last month, the minister introduced an electronic voting machine, saying it would ensure transparency and help get rid of rigging in elections. The machine was developed by the National Institute of Electronics (NIE) which comes under the Ministry of Science and Technology. 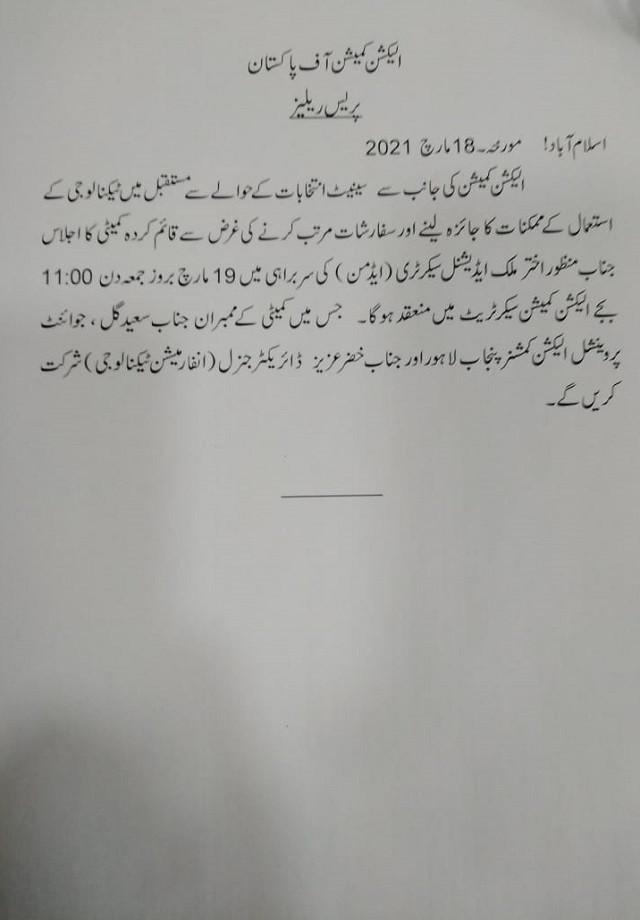 A copy of the ECP notification available with The Express Tribune.