How trophy-hunting saved the Markhor 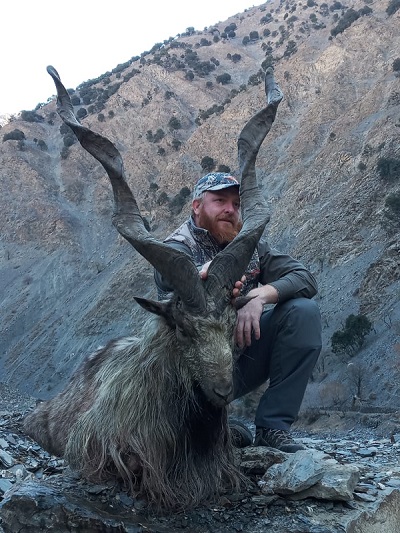 American huntner Edward Joseph poses with the longest horned-Markhor he hunted down in the Toshi Shasha conservation area in Chitral. PHOTO: EXPRESS
PESHAWAR:

The Markhor, one of the largest and most magnificent members of the goat family, has been trotting the mountainous terrains of Central Asia, Karakoram and the Himalayas for centuries.

The screw-horned goat, which gets its name from a combination of two Persian and Pashto words—Mar (meaning snake) and Khor (meaning eater) — was once considered to be the most difficult game in all of British India. It’s nativity to high-altitude regions made the Markhor’s hunt a dice with death for all who dared summiting the perilous peaks of its haunt.

The ruggedly built mountain goat, which can grow its horns out to 65-inches and weigh up to a 110 kilogrammes, has an average lifespan of 10-12 years, in which it produces a litter of one to two kids every six months.

Owing to excessive hunting, poaching and loss of habitat, The International Union for the Conservation of Nature and Natural Resources (IUCN) had classified Markhor as an endangered species. However, following various restorative efforts, the provincial government was able to recover its Markhor population from 275 in 1993 to some 3,500 goats in 2018.

In a bid towards conservation, the government opened Khyber Pakhtunkhwa’s gates to international trophy-hunting in the 1990s. It was hoped that controlling, taxing and regularising Markhor-hunting would not only curb illegal hunting activities but also generate revenue for the locals.
Foreign hunters have since been permitted to hound the mountain goat for a hefty government fee, 80 per cent which is directed towards the local community while the remaining 20 per cent goes to the national exchequer.

According to provincial wildlife department, the introduction of trophy-hunting has helped the local Markhor population grow from a mere 600 in Chitral to approximately 4,000 to 5,000 goats in the last three decades. “Locals would previously hunt down the goats in excess, much of which was illegal and brought our Markhor population close to extinction.

To save the population, we shut down all Markhor-hunting activities and introduced trophy-hunting, which is greatly controlled and generates revenue. The first foreigner to be allowed to hunt was a German who paid $1,500 in 1998 for a single goat. Today, shooting a Markhor can cost upwards of $150,000, which was last paid by an American hunter in 2019,” shared an official of the wildlife department.

Speaking in the regard, DF Chitral Altaf Hussain said that trophy-hunting season lasts from January till March. People from 24 villages split and utilise a portion of the revenue generated from the game to funding basic amenities, including community schools, road construction, health centres, teacher salaries, welfare work and redressing of various community issues.

“Markhors are primarily hunted in two big areas of lower Chitral. One is Tosha Shasha, while the second is Gehriat Golen. Locals here see the games as not only a means of earning livelihood, but also an opportunity which has led to great developments in the region, including the construction of schools, colleges and handicraft centres for women,” expressed Hussain.

Zara Bibi, a local woman from Toshi, told The Express Tribune, that in the days prior to trophy-hunting, women like her had little avenues for income generation while much of their time was spent fetching water from far-flung areas. “With the advent of trophy-hunting, which funded the creation of handicraft centres, local women have found the opportunity to earn from home. Whereas, the revenues generated have also helped the village conservation committee in installing water pipelines, so we no longer have to trek several miles for a pot of water,” she told The Express Tribune.