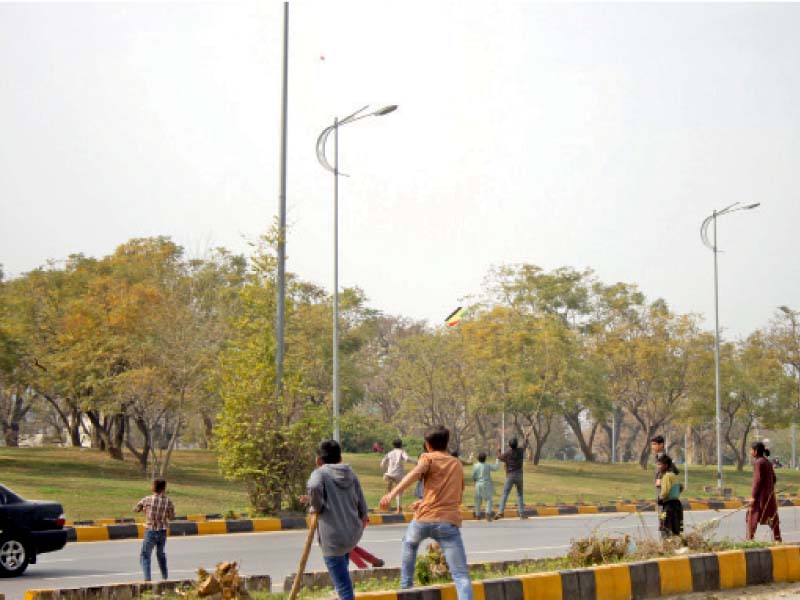 Youngsters run after a falling kite on the busy 7th Avenue in the federal capital. On Wednesday, a 13-year-old boy was injured after he fell from his roof while flying a kite in Rawalpindi. PHOTO: ONLINE
RAWALPINDI:

The Rawalpindi police have come up with a unique solution to curb kite flying and aerial firing in the city by deciding not to issue character certificates to those involved in such activities.

City Police Officer (CPO) Ahsan Younas said on Wednesday that police will not issue character certificates to suspects nominated in both offences during the Basant season as there is a ban in place, adding that they will be penalised.

Notably, students require a police character certificate while applying for admissions at higher educational institutions as well as to apply for jobs in foreign countries.

Kite flyers undeterred Kite-flying enthusiasts in Rawalpindi have announced celebrating Basant night on Thursday (today) in defiance of the ban on the activity.

It should be noted that a Basant night was also celebrated last week in the garrison city despite the ban. The Kite Flying Association (KFA) had announced celebrating the spring festival separately in the Cantt and other areas of the city.

The police officials said they would register cases against the kite-flyers while the suspects flying kites on the rooftops would be detected using drone cameras and binoculars.

They added that the police personnel would be deployed on Murree and Metro Bus track as well as on the roofs of more than 1,000 buildings in the city. The police have also issued instructions for motorcyclists to install protective wire on their bikes for protection against these metal and glass strings. Meanwhile, all three allied hospitals are on high alert in view of possible injuries, the spokesperson shared.