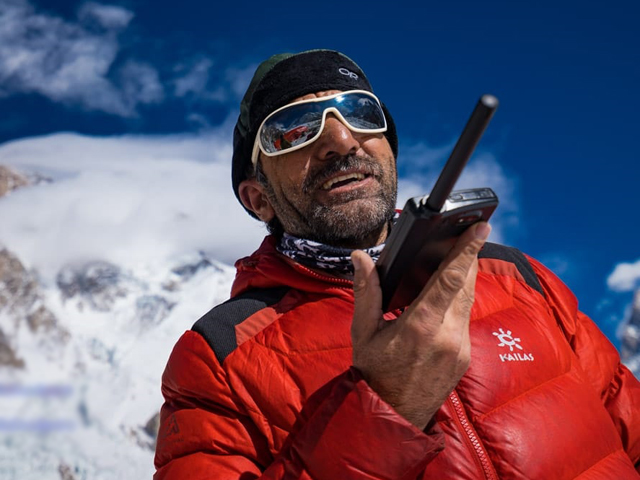 Despite a halt in the rescue operation owing to bad weather conditions, friends and families of Ali Sadpara and the other missing K2 climbers, vowed on Wednesday to carry on with the search of the "savage mountain" with the help of sophisticated satellite data.

Rescue efforts have been on since Pakistan's Ali Sadpara, 45, Iceland's John Snorri, 47, and Chile's Juan Pablo Mohr, 34, went missing on February 5 while attempting to ascent the K2.

“For the first time ever, this team is working with the Iceland Space Agency to review the SAR technology - that has never been used before for searching and rescuing - not the SAT technology, to cover every inch of the higher elevations of the mountain despite bad weather conditions,” read a statement issued from Skardu.

The families and friends have set up a virtual base camp to ensure a thorough search-and-rescue effort.

The camp has been established by Rao Ahmad, Ali Sadpara’s long-time friend and his son Sajid Sadpara, along with British-American climber Vanessa O’Brien, also Pakistan’s Goodwill Ambassador who has previously summited the K2 with John Snorri - the missing Icelandic mountaineer.

The team has got the support of the ICEYE - a global leader in small satellite synthetic-aperture radar (SAR) technology that produces high-resolution imagery collected even through clouds and darkness, according to information available on its website.

"The ICEYE’s slogan, “every square meter, every hour” gives us the perfect visual acuity to view areas inaccessible to helicopters because of harsh winter conditions and excessive winds,” the statement said.

According to Home Secretary Muhammad Ali Randhawa, FLIR (forward-looking infrared radar) mission with a C-130 aircraft, to find the missing climbers through thermal imaging, will start Thursday morning, while ground teams would also follow the path taken by the mountaineers.

Bad weather on K2, earlier on Wednesday, had hampered the helicopter search and rescue operation.

“We are extremely grateful to Daniel Leeb, the Founding Partner & Mission Director at the Iceland Space Agency, for his incredible leadership and assistance, as well as the extraordinary teams at Airbus, Planet and EGEOS,” the statement said.

The team of family and friends have asked the anxiously waiting public to understand that a lot of work was going on in the background, and not to worry about helicopters being able to fly or not.

“If the weather is good, yes they will fly, but multiple flights have not seen any bodies. We are using more sophisticated technology," they observed in the statement, while also appealing to the people to avoid rumours.

The team has also got additional data from devices the climbers carried - Garmin, Thuraya, Inmarsat - together with interviews from witnesses. This would help in creating a timeframe of the climbers’ locations during their summit bid.

'Thankful for all the support'

“We are grateful for the helicopter flights by the Pakistan Army pilots, who pushed the upper limits during each of these search flights,” the statement further read.

The team also thanked Canadian filmmaker Elia Saikaly for capturing imagery during these search-and-rescue flights, and to (Ret) Lt Col. Hassan bin Aftab, Director of Operations at Pakistan Analytica, who coordinated the overall logistics for the search-and-rescue attempts and served as the focal person for the families.

"None of this would have been possible without the support and assistance of the Chief of General Staff and the Pakistan Army. We are very grateful to the ISPR, the Chief of Defence of Iceland and the Foreign Ministers of Iceland, Pakistan and Chile," the families maintained.

“We would like to thank everyone who expressed interest in John, Ali, and JP’s climb, and to those who expressed concern for their wellbeing, those who offered to help, and those who prayed for their safety and offered ideas and thoughts on the use of drones and search locations,” the statement further read.

Freezing temperatures and wind chill, averaging -50 degrees Celsius and strong winds have made the flight operations next to impossible.

However, the team believes that the climbers could have built an ice cave or shelter, and if they had sufficient fuel to melt water, it could have extended their lifeline, “but it depends [on] how low they made it down on the mountain.”

The families quoted Martin Luther King Jr - "We must accept finite disappointment, but never lose infinite hope" - while requesting the Pakistani government to continue to provide search and rescue support if the weather permits.