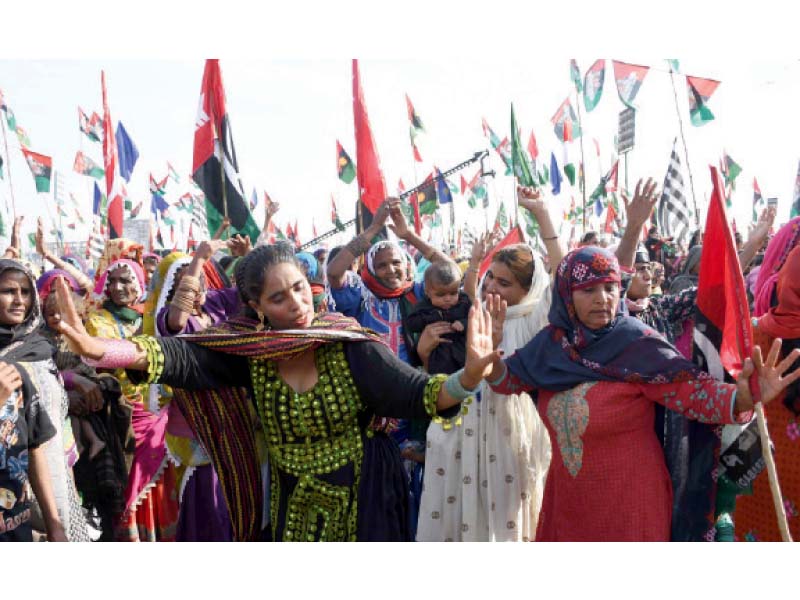 Women dance at the Pakistan Democratic Movement’s rally in Hyderabad. People from across Sindh gathered in the city on Tuesday, when it hosted a public meeting of the 11-party opposition alliance. PHOTO: INP
HYDERABAD:

Gathering people from across the province and, undeniably with the support of the provincial government, the Pakistan Peoples Party organised on Tuesday the maiden power show of the Pakistan Democratic Movement (PDM) in Hyderabad.

But the PPP Chairperson Bilawal Bhutto Zardari and chief of Jamaat-e-Ulema-Islam-Fazl (JUI-F) and PDM Maulana Fazlur Rehman credited only the people of Hyderabad for flooding the ground of the event in large numbers.

PPP MPA Sharjeel Inam Memon, who was primarily responsible for making arrangements at the local level, put the number of chairs placed in the enclosure at 50,000. But he had claimed that the actual attendance was going to be far higher. "The people will not only fill the enclosure but the several kilometres-long Hyderabad Bypass Road as well."

The PPP's MNAs and MPAs from most of the districts of Sindh were tasked with bringing people to the event. The flags of the PPP, JUI-F and other allied parties waved side by side as tens of thousands of people thronged the ground of the public meeting.

Read More: We also want military to stay away from politics, Fazl says in Hyderabad rally

Talking to the media earlier in the day, Sindh Information Minister Syed Nasir Hussain Shah had claimed that the PDM's public meeting in Hyderabad would be a historic event. "The people of Sindh will write a new political history today." The PPP Sindh's president said the people have gathered at the public meeting to make the PDM's movement against Pakistan Tehreek-e-Insaf's government successful.

"We have come here to support our leaders so that they can get rid of Imran Khan who has become a symbol of inflation," said Rehmat Jamali, who told The Express Tribune that he had come from Shaheed Benazirabad for the event. Carrying the JUI-F's flag in his hand, Nazeer Ahmed appeared hopeful that Rehman's relentless political struggle will drown Khan's government before long. "JUI-F's workers won't give up without achieving our objective."

Khalid Aiwan, a resident of Hyderabad, said although he knew that Maryam Nawaz would not attend the public meeting, he hoped she might turn up at the last minute if the health condition of her daughter allowed. "It would have been her first appearance in a public meeting in Hyderabad."

More than 2,500 policemen, commanded by SSPs from nine districts of Sindh, were deployed for security, which was divided in six zones. The movement of heavy transport vehicles from Karachi to the upcountry and vice versa was diverted from Jamshoro and Noshehro Feroze districts to the Indus Highway.

The traffic, in routine, moves through the National Highway, the stretch of which from Hyderabad to Noshehro Feroze was kept free for the transport bringing people from different parts of Sindh to the public meeting on a ground along Hyderabad bypass.