Supreme Court to take up case on Jan 5; the cleric who instigates attack belongs to JUI-F

Chief Justice of Pakistan Gulzar Ahmed will take up the desecration of a Hindu shrine/temple in Karak district of Khyber-Pakhtunkhwa (K-P) by a mob as police on Thursday rounded up dozens of suspects – including the cleric who had instigated the attack.

The top judge also directed the One Man Commission on Minorities Rights, the provincial chief secretary and police chief to visit the site and submit a report on the incident, according to a statement issued by the apex court.

The chief justice said this while speaking to MNA and patron-in-chief of Pakistan Hindu Council Dr Ramesh Kumar who called on him at the Supreme Court Karachi Registry to discuss the incident.

Justice Gulzar showed “grave concern over the tragic incident” and informed Kumar that it will be taken up by the apex court on Tuesday.

A mob, instigated by a local cleric, vandalised a small Hindu temple and the adjacent shrine of saint Shri Paramhans Ji Maharaj, which is a pilgrimage site for the community, in the Terri area of Karak.

Meanwhile, police on Thursday arrested Maulana Sharif along with dozens of his supporters who have been nominated in the FIR registered on the complaint of Rehmatullah, the SHO Terri police station. The arrests were made in Urmar village of Karak.

In all, 24 people have been arrested, police said, adding that the suspects had been identified on the basis of video footage of the incident available online.

“This was the samadhi of our revered saint Shri Pramhans Ji Maharaj, who had died at the site,” a community leader told The Express Tribune by the phone from Kohat. “We can’t express our concern openly. We are poor people and cannot afford confrontation with these fanatics,” he added while requesting anonymity.

“It is not the first time Maulana Sharif instigated the desecration of the shrine and temple. In 1997 too, he had vandalised the same premises,” the general secretary of Terri Aman Committee, Shafiq, told The Express Tribune. 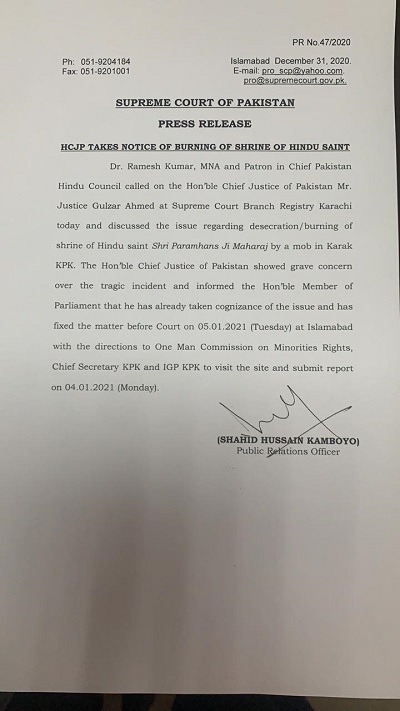 The community had moved the Supreme Court which ruled in their favour and subsequently the renovation of the shrine and the temple had started.

“Residents of Terri were not happy with the expansion of the temple. Recently, the Hindu community bought more land to build rooms, kitchen, and bathrooms for pilgrims,” he added.

This whipped up widespread resentment among the local population, but the deputy commissioner convened a meeting with the local peace committee on December 22 where all the residents dropped all the objections.

“Maulana Sharif, who is an influential cleric from the nearby village of Urmar, was not happy with the development. Last Friday, he made a public announcement of his intention to raze the temple,” Shafiq said. “On Wednesday, he made good on his threat.”

According to him, Maulana Sharif belongs to the Maulana Fazl-led faction of Jamiat Ulema-e-Islam and the area is considered a stronghold of the politico-religious party. “He had issued a fatwa that anyone killed during the attack on the shrine/temple would be a martyr,” he added.

Wazir Zada, the provincial chief minister’s adviser on minority affairs, visited the site on Thursday. “There was a small temple and a shrine. It was a pilgrimage site for the Hindu community,” he told The Express Tribune by the phone from Peshawar.

He confirmed that both the structures have been demolished and reduced to ashes. “Such acts are not acceptable,” he added.

However, Wazir denied the district administration was aware of the intentions of the gathering mob and that it didn’t stop them from desecrating the premises. “Policemen were deployed but the mob outnumbered them,” he said. “They could not stop the mob who stormed the premises.”

PTI’s minority leader Ravi Kumar said the government had assured the community that the temple would be rebuilt and action would be taken against those responsible. “Maulana Sharif is an outsider, not a resident of Terri. Locals have assured the administration and police that they have nothing to do with the incident,” he added.

Amazon campaigns to make cannabis legal in the US