A bright light sparkles in Tharparkar 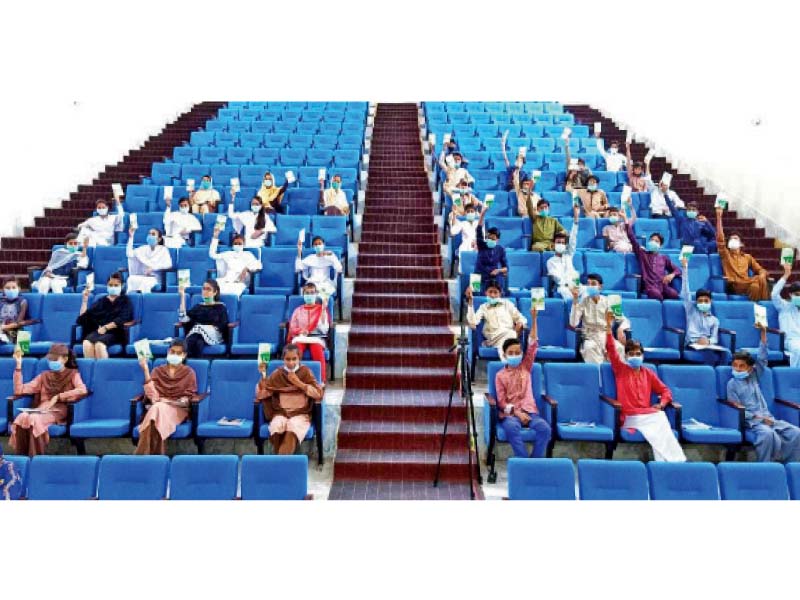 Members of the Tharparkar Youth Parliament raise their hands as they gather for a mock provincial assembly session. The initiative aims to promote peace and harmony, as well as an understanding of democratic values. PHOTO: EXPRESS

For those looking in from the outside, matters of governance and legislation can at times be disorienting. Without a perfect understanding and appreciation of democratic processes, one may begin to feel as if the system only runs around in circles.

But a group of high school students from Tharparkar are learning first-hand what it means to be the custodians of democracy. And in doing so, they have been proving that our collective future may end up in much better hands than we hope.

“We need to understand each other,” were the words of the ‘chief minister’ of the Tharparkar Youth Parliament Yurok Balani. “We need to respect each other, especially each other’s religious values, without discriminating against caste, creed or colour.”

He was speaking during the proceedings of a mock ‘provincial assembly’ that comprises some 50 students from 13 government high schools of Tharparkar district. The assembly, which astonishingly boasts of 40 per cent female representation, has been set up by the Thar Education Alliance (TEA) with the aim of developing an understanding of democratic processes and values among the district’s students.

The initiative has already piqued the interest of the Election Commission of Pakistan, which actually supervised the election of the youth assembly’s chief minister and cabinet. The polls, which took place just last week in Mithi’s Benazir Bhutto Cultural Complex, were conducted using ECP-provided ballot boxes.

The elections were fiercely contested, as they should be in a healthy democratic system. Balani emerged victorious over his rival Jay Malal, but only by a single vote. Both contested the position as part of two different youth parties, namely the Thar Amn Party and the Thar Sujag party.

“It took us some time to select students from various schools for the assembly,” said TEA head Partab Shivani. “But we held capacity-building training sessions for those who were selected.”

According to Shivani, the youth assembly members hail from all four union councils of Tharparkar. “To prepare them for participation, we taught them subjects like anthropology, livestock management, demography and governance structure,” he told The Express Tribune. “The students also learnt how media, especially digital media, works in conjunction with democratic processes.”

Describing the process of election, Shivani said the two parties that participated both presented their own manifestos. “Both of these covered topics like peace, culture and female education,” he said.

One of the youth assembly’s female members, Jhalak Kumari, has been overjoyed with her experience so far. “My aim is to do everything I can to improve the literacy rate among girls in this district,” she said. “At present, only 11 per cent of the district’s entire population is literate, but I hope to help change that.”

TEA head Shivani hoped the initiative would both bring a positive change in the lives of participating students and would enable them to bring about further positive changes in their society. “Their participation in and understanding of the election process is a good sign for all of us,” he said.

The youth ‘parliamentarians’ will now establish peace clubs in their schools and will engage their fellow students in other assembly initiatives. According to Shivani, they will also have a chance to meet members of the Sindh Cabinet and visit the provincial assembly.