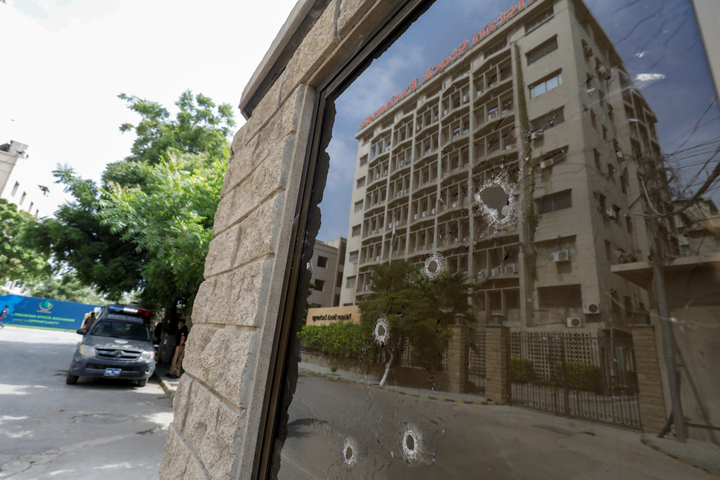 Aftermath: Bullet holes pepper the window of a security booth at the Pakistan Stock Exchange after it was attacked by terrorists on Monday, creating fear and panic in the city's financial centre. PHOTO: REUTERS
KARACHI:

Pulling his motorcycle up into the parking lot next to the Pakistan Stock Exchange (PSX) building, Yousuf Hingoro greeted the dozen or so other employees present there, as he did every morning when he came to work.

They were turning to head inside when the gunshots rang out, stunning them into silence.

"I've never heard such firing before in my life - not even in Lyari," said Hingoro with a touch of humour before turning sober once again. "A wall was all that stood between us and the terrorists. We were just praying to Allah to save us."

Armed gunmen attempted to storm the PSX compound on Monday morning, killing a policeman and three security guards before being gunned down at the entrance. Seven others, including three police officials, were also injured in the gun and grenade attack, which took place around 10am, wrapping up minutes later - eight minutes to be exact, according to Sindh Rangers director general Omer Ahmed Bukhari.

"I was just about to leave the parking lot when they attacked our office," he narrated to The Express Tribune. "The only option for those of us in the car park was to stay calm - it was either that or start climbing the trees!"

Though the firing had startled them, Hingoro and his colleagues quickly guessed what was going on. "We first tried to go to the office, but a police official standing at the gate [of the parking lot] told us not to go anywhere," he explained. "I don't think the attackers were aware there were people in the parking areas. [If they knew], they could easily have targeted us or taken us hostage. But I think their objective was to enter the building."

Fearful, Hingoro and his co-workers remained put for around half an hour. "We only ventured outside when the security forces took complete control of the situation."

Looking for a safe place

PSX, on II Chundrigar Road, lies in the financial centre of Karachi - the city's equivalent of Wall Street. With the loud gunfire, chaos erupted in its surroundings.

When the firing began, Saeed Anwar, who works at a liquefied petroleum gas shop on the adjacent MA Jinnah Road, hid inside the shop with a cobbler and a chowkidar (guard). "Look, three bullets left marks around the entrance of my shop," he said, pointing to the bullet holes.

"It wasn't even safe for us to hide in the gas shop," he laughed, saying all three of them started running to the nearby Jilani Centre for shelter. "And it wasn't just us. Everyone was running and screaming in fear. There was complete panic in the area. It was clearly a terrorist attack - I could see even police officials running."

A security guard posted around 100 metres from the stock exchange building first thought a robbery attempt was underway. "But when the gunshots continued without interruption, we realised it was a [terrorist] attack," he told The Express Tribune, still fearful hours after the incident.

"I saw people running and the terrorists trying to enter the main gate of the stock exchange. I could see them shooting at the security personnel," another shopkeeper told The Express Tribune. "There were some people standing at the bus stop just opposite the PSX gate when they attacked; they all started running in search of safety."

Praising the police for their bravery, he remarked that bystanders gathered at the scene within minutes of the law enforcement personnel taking control of the compound - many of them holding up their mobile phones as they filmed the events unfolding in front of them. "After all, we are Pakistanis. We love witnessing such scenes." 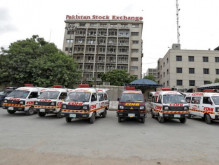 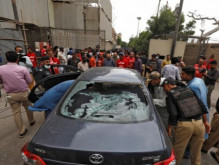 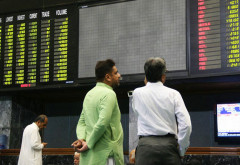