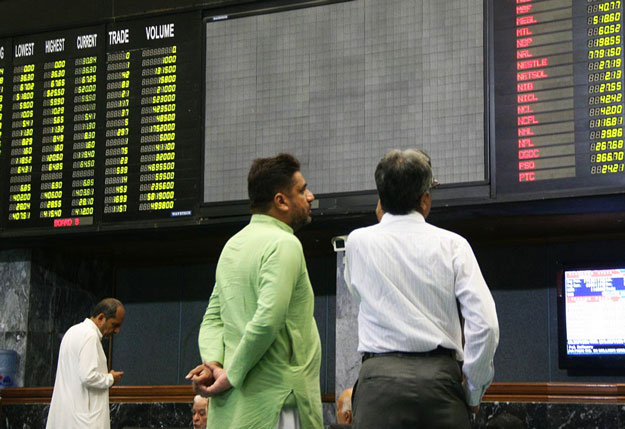 Though the attack failed to deter investors from buying, the budget approval by parliament continued to weigh on sentiments. PHOTO: FILE
KARACHI:

It was a nerve-wracking day at the Pakistan Stock Exchange (PSX) as armed men stormed the building during the early hours of trading. However, quick defensive action by security personnel not only prevented significant loss of life but also saved the country from a financial hit.

Terming it an “adventurous day at the PSX”, Topline Securities CEO Mohammed Sohail said that despite the attack and firing, trading and settlement continued smoothly. “Investors did not panic and the market gained by close to 1% with average volumes,” he added.

“Interestingly Pakistan was amongst one of the best performing market on this single day in Asia despite this failed attack.”

The KSE-100 index opened on a positive note and may have continued to climb had the terror-attack not interrupted the rally. The index plunged sharply after the first hour of trading, however, recovery was not far behind.

As the security personnel worked to stabilise the situation, the index made a remarkable comeback into the green and maintained its upward trajectory throughout the session.

Though the attack failed to deter investors from buying, the budget approval by parliament continued to weigh on sentiments. The national assembly approved the federal budget for 2020-21 after the closure of the market.

Despite lower volumes then the preceding session, investors did not panic which helped the market maintain its stability and function smoothly.

Following the incident, the PSX issued a statement reiterating that throughout this turmoil the stock market continued to operate normally and trading continued.

“Protocols in place were followed and the management took necessary measures to ensure that the Exchange continued to function normally,” it added.

Speaking about the incident, PSX MD Farrukh Khan said, “Any attack on this institution is an attempt to damage the economy and scare away investors from Pakistan.”

He added that all staff, TREC-holders and investors, who were present at the premises, was safe.

He further stated, “PSX has robust protocols and processes in place that have allowed the Exchange to continue functioning under such extreme conditions.”

JS Global analyst Danish Ladhani said, “The market came under pressure in the early hours of the trade after security forces killed four terrorists who attempted to storm the PSX compound in Karachi in an armed attack.”

Mixed sentiment was seen in the exploration and production sector where Pakistan Oilfields (-0.3%) closed in the negative trajectory whereas Oil and Gas Development Company (0.5%) and Pakistan Petroleum (0.8%) closed in the green zone as international oil prices continue to drop on Covid-19 concerns.

Moreover, mixed sentiment was also observed in the fertilisers sector where Engro (0.1%) settled in the green zone.

“Going forward, we expect the market to remain range bound and recommend investors to sell on strength,” the analyst said.

Overall, trading volumes dipped to 156.9 million shares compared with Friday's tally of 198.2 million. The value of shares traded during the day was Rs5.6 billion.

Shares of 351 companies were traded. At the end of the day, 193 stocks closed higher, 136 declined and 22 remained unchanged.

Foreign institutional investors were net sellers of Rs431.7 million worth of shares during the trading session, according to data compiled by the National Clearing Company of Pakistan.