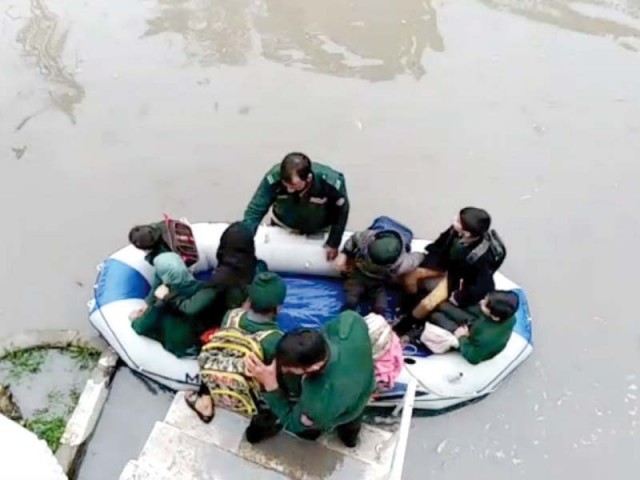 Commuters wait for transport, as schoolchildren trudge in downpour while rescue workers evacuate people from a school building. PHOTOS: EXPRESS/AGENCIES

RAWALPINDI / ISLAMABAD: As part of a cold and wet spell currently prevailing in the country, heavy rains lashed the twin cities of Islamabad and Rawalpindi on Monday, causing the mercury to fall further and affecting the daily lives of the people.

Office workers, students, and traders were caught off-guard when the showers started again after a brief pause in the morning. The downpour that started late on Sunday night continued through Monday intermittently.

Rainwater accumulated on some roads of Islamabad as gutters were chocked. As a result, rainwater flowed out to form natural streams. Many low-lying areas of the twin cities were also flooded, particularly in Rawalpindi where the Committee Chowk underpass on Murree Road was filled with rainwater due to which scores of vehicles were left stranded at the busy intersection.

Other thoroughfares in the city, including the Commercial Market, Liaquat Road, College Road, Saddar City Road, Kashmiri Bazaar, Ganjmandi were also submerged due to a choked drainage system.

The worst affected were schoolchildren who got drenched in cold weather on the first day of school after an extended winter break.

People were seen standing at bus stops waiting for public transport. The few vans that turned up were overloaded, whereas taxi drivers were demanding exorbitant fares.

The business activities in the city also remained halted after the downpour and drop in the mercury level. 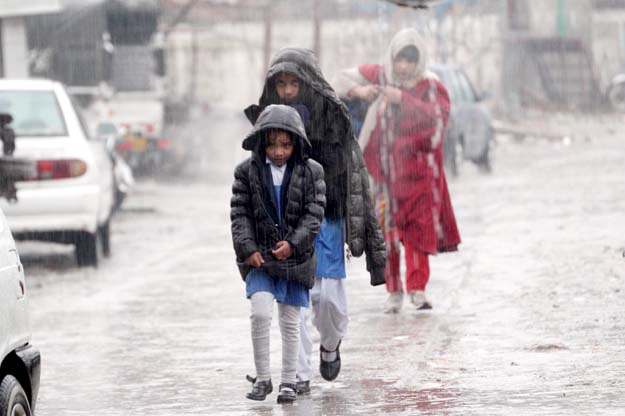 Water and Sanitation Agency (Wasa) deployed suction machines in many areas of the garrison city to swoop up rainwater from roads.

Wasa personnel continued the operation to drain water from main thoroughfares till evening.

However, the low-lying areas in the city and cantonments got flooded and no relief work was started there.

Meanwhile, the intercity bus terminals remained deserted throughout the day. Many transport services had cancelled their trips and put passengers on the next day’s coaches. Most of the passengers had also rescheduled their road trips owing to rainy weather.

The Ayub Colony area of the Chakala Cantonment Board (CCB) was inundated due to a clogged drain adjacent to the locality.

Rescue 1122 officials said that they had received a distress call that some 30 students and five teachers of a private school were marooned in the school building flooded with over two feet of water.

A special team of Rescue 1122 reached the spot and safely evacuated the teachers and students in boats.

However, the locals told The Express Tribune that CCB staff did not bother coming to the related area to help people out despite repeated complaints. At the moment, almost two feet of water is accumulated on the streets and roads in the area owing to which the residents have been confined to their homes and have taken refuge on the roofs.