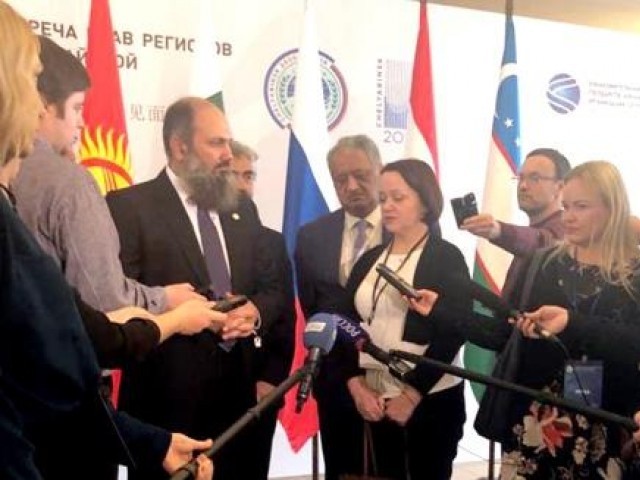 CM speaks to media after the meeting of the heads of the regions from the SCO in Chelyabinsk, Russia. PHOTO: EXPRESS

QUETTA  : Chief Minister Jam Kamal Khan has said Gwadar port could serve as a gateway for the landlocked Central Asian countries by providing them access to maritime routes and simultaneously serve as a trade corridor for the rest of the world.

“Pakistan and China are already working to uplift Gwadar port in order to facilitate connectivity, trade and investment in the region and beyond,” the chief minister said addressing a meeting of the heads of the regions from the Shanghai Cooperation Organisation (SCO) states, in the Russian city of Chelyabinsk on Wednesday.

In the integrated world, Kamal said, a regional organisation such as the SCO has a greater role to play for coordinating actions and policies for ensuring progress.

“We are highly appreciative of the Russian federation and Chelyabinsk region for bringing us together at this platform,” he said, adding that the delegation would thank Dubrovsky, Governor of Chelyabinsk, for taking this initiative to host first meeting of the forum.

About his province, Kamal said that Balochistan is Pakistan’s largest province in terms of area with the smallest population while it is rich in natural resources and offers tremendous opportunities for investments.

“I [the CM] invite you all to come and visit us or send your investors to explore possibilities for mutual cooperation. My government is ready to extend all possible facilities,” he maintained.

The chief minister said the government looks forward to exploring possibilities of cultural cooperation with other regions of the SCO member states.

He said that Pakistan regards SCO as an extremely important organisation as it would allow countries to promote regional connectivity and reflect their interest in regional peace and development.

He also said that it has offered a new model for inter-state cooperation for peace, connectivity and sustainable development.

Kamal said: “The guiding principles of Shanghai Spirit like mutual trust, equality, shared development and respect for cultural diversity make the SCO a new paradigm of global and regional cooperation”.

It may be recalled that at the SCO Summit in Qingdao, China in June 2018 it was decided to establish a forum of SCO regions (provinces) to promote humanitarian, cultural trade and economic cooperation within the framework of the SCO.
Moreover, the SCO comprises eight member states, Pakistan, China, Russia, India, Uzbekistan, Tajikistan, Kazakhstan and Kyrgyzstan along with four observer states.

All set for by-polls in Kech today