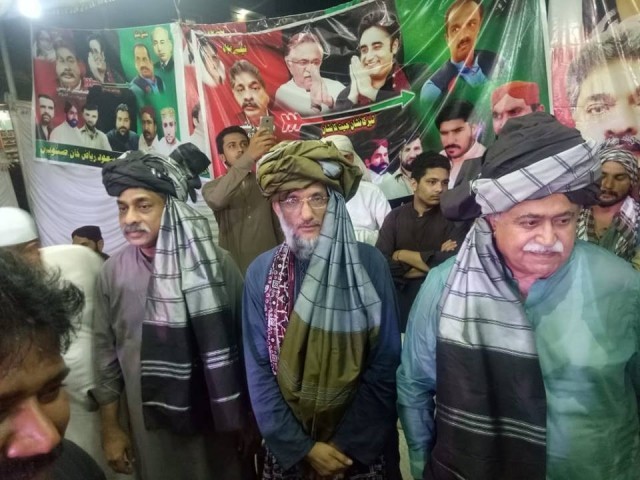 HYDERABAD: The split in the vote bank of religious parties in Hyderabad is likely to pave the way for a comeback of Muttahida Qaumi Movement-Pakistan’s elected legislators from the city. Since the party was founded, it has won representation from the areas dominated by the Urdu-speaking community, beginning from 1988 general elections.

The Muttahida Majlis-e-Amal (MMA) is the only political force so far that knocked down the perception of the MQM’s invincibility in Hyderabad city. In the 2002 elections, two of the MMA candidates from the city made it to the National and Sindh assemblies. The Pakistan Tehreek-e-Insaf appeared strong in the 2013 elections, however, it failed to get considerable votes in 2013. The response of Hyderabad’s voters to the Pak Sarzameen Party has yet to be seen.

The MMA has been forged once again before the 2018 elections. However, the situation is not the same as it was in 2002 as there are other religious parties as well in the fray due to which the religious parties’ alliance does not seem a formidable force. Unity in the ranks of politico-religious parties is conspicuously missing in the ongoing campaign in Hyderabad as the Jamiat-e-Ulema-e-Pakistan-Noorani (JUP-N), Pakistan Sunni Tehreek (PST), Milli Muslim League (MML) and Tehreek-i-Labbaik Pakistan (TLP) are contesting the elections alongside the MMA through their own platforms.

GDA to contest elections under one symbol

Although, the JUP-N and MML have made seat adjustments, they only involve two NA constituencies where central leaders of the two parties are in the run. JUP-N head Sahibzada Abul Khair Muhammad Zubair, who was elected an MNA from former NA-220, current NA-227, on the ticket of MMA in 2002, is running from the same constituency. A central leader of the MML, Faisal Nadeem, is contesting the elections from NA-226, comprising the Latifabad area of Hyderabad. The MML has been registered with the Election Commission of Pakistan as Allah-o-Akbar Tehreek. The PST is also supporting Zubair in NA-227.

No other seat adjustment has been made by religious parties in Hyderabad and, hence, they are expected to consume each other’s votes.

The JUP-N has also managed to get the Pakistan Peoples Party’s (PPP) support for NA-227. It is supporting the PPP in two City taluka-based provincial constituencies, PS-66 and PS-67, and the MML in Latifabad-based PS-64. Both the JUP-N and MML are vying for PS-65 Latifabad.

The MMA and TLP have fielded candidates on all the six seats in City and Latifabad.

Though there seems to be a tacit acknowledgment of the harmful impact of the vote bank’s split, leaders of all the religious parties have been publicly denying the fact. “The divide won’t have much effect,” argued Zubair, who also heads Milli Yakjahti Council besides JUP-N, while talking to The Express Tribune. “The MMA has lost its luster of 2002. I do not feel threatened by MMA.”

Zubair appeared to be confident of his victory as he had secured the PPP’s support. According to him, the PPP is stronger than any other political player in the constituency. “The PPP has around 50,000 votes [in NA 227] also because many areas inhabited by Sindhis have been included in the constituency after the recent delimitation.”

The JUP-N chief also revealed why his party could not enter into any deal with the MMA. Efforts for seat adjustments with the MMA were made when the election process had started, he said, adding that Jamaat-i-Islami leader Liaquat Baloch visited him in June and they both agreed that there was a need for seat adjustment.

“I offered them that JUP-N will support MMA’s candidate for NA-226 Tahir Majeed [who is also president of MMA Hyderabad chapter] in return for their support to his candidacy,” he disclosed. “But due to stubbornness of Awais Noorani [head of the other faction of JUP and son of the late Shah Ahmed Noorani] we couldn’t reach an agreement.”

Awais-led JUP is a part of the MMA, which has given ticket for NA-227 to Karamat Ali Rajput, a JUP candidate. The JUP leader himself visited the constituency twice to canvass for Rajput.

Commenting on the possible threat of the TLP, Zubair claimed that the TLP had lost whatever little support it enjoyed in Hyderabad after the withdrawal of Dawat-e-Islami’s support.

MMA Hyderabad President Tahir Majeed, on his part, played down the political weight of Zubair, contending that his win in 2002 was made possible by the unity of religious parties that included Shah Ahmed Noorani’s party. “Now, Awais Noorani is a part of the MMA and the Barelvi vote bank is with Noorani sahib not with Zubair sahib. Forming an electoral partnership with the corrupt and inept PPP has further adversely played against Zubair’s campaign,” he maintained.

According to Majeed, the MMA had offered the JUP-N that that latter would be offered seats in the next local government elections if withdrew all its candidates. The offer was not accepted, he said.

Majeed also viewed the MML as a party with extremely minimal support. “I spoke to Faisal Nadeem and asked him to withdraw all their candidates in MMA’s favour. But he told that only the MML’s central leadership can take a decision in this regard.”

However, Nadeem, had another version to offer to The Express Tribune. According to him, the party was willing to support MMA candidates on the seats of the provincial assembly if the alliance withdrew Majeed from NA-226 where Nadeem is also in the run. “We are carrying out a more vigorous campaign in Latifabad. And any independent observer can notice that we have been getting more support than MMA candidates,” he contended.

He added that the public’s response even in the two seats of City taluka had also been appearing auspicious for the MML.

In 2002, MMA’s Zubair secured a marginal win against the MQM’s candidate, bagging 41,190 votes, just 610 votes higher than the latter. Similarly, on a PS seat, Abdul Rehman Rajput of the MMA won with a margin of around 1,000 votes against MQM’s Muhammad Farooque Qureshi.

“In the ongoing campaign, there appear to be only two strong candidates among the religious parties. One is Sahibzada Zubair [of JUP-N in NA-227] and the other Moulana Abdul Waheed Qureshi [of MMA in PS-66],” contended a local leader of MMA, requesting anonymity. “There seems no chance of winning any other seat in Hyderabad.”

In NA-255, past winners may get a run for their money