Work on the shorte­st BRT line is still in the initia­l stages, despit­e the passag­e of over a year
By SHEHARYAR ALI
Published: October 16, 2017
Tweet Email 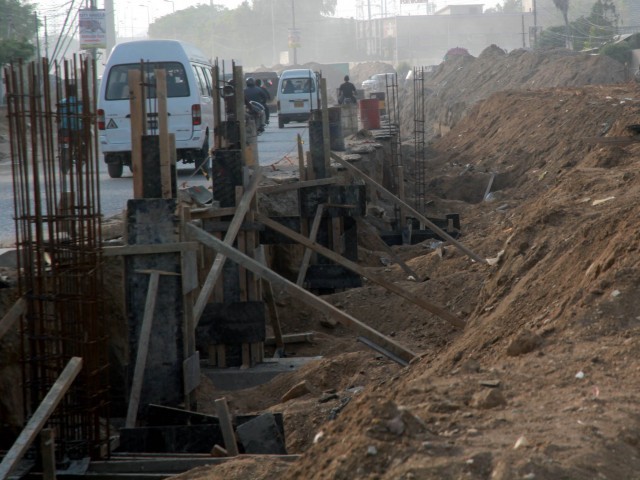 Work on the project has been progressing at a very slow pace. PHOTO: ATHAR KHAN/EXPRESS

KARACHI: While the citizens of Karachi continue to suffer and travel in four to five decade old buses, a week ago Punjab Chief Minister Shehbaz Sharif celebrated the arrival of the first set of bogies that arrived from China to be used in Lahore’s 17 kilometre-long elevated Orange Line Metro project. Work on Lahore’s Orange Line started in October 2015 and, despite several cases in the Lahore High Court, the project seems to be on the right track.

In Karachi, however, the provincial government’s long-standing tradition of maintaining a slow and not so steady pace of work on most of its infrastructure projects has left the citizens fed up. The slow pace of work often leaves residents of the city at the mercy of traffic jams or environmental and health issues caused by the construction of these projects.

Such is the case in Orangi Town, where residents have grown frustrated with the construction of the same Orange Line Bus Rapid Transport (BRT) project which they believed would ease their commuting problems. Frequent delays and a lackadaisical approach to construction work have frustrated the citizens.

Work on the 3.9 kilometre-long project started last year in June after the foundation stone was laid by Chief Minister Murad Ali Shah. The cost of the project was estimated to be Rs1.14 billion.

Once completed, the Orange Line BRT will serve 50,000 passengers of Orangi Town. The BRT will begin from the Town Municipal Administration Ground in Orangi and will end at the Matric Board Office where commuters wanting to travel further can catch a Green Line bus.

At the time, Murad had promised that the project would be completed at a rapid pace in order to ‘give relief’ to the residents of Orangi Town and other parts of District West, who would then be able to travel around the city at ease and be connected to the other BRT lines.

The chief minister had also said that the locality was developed by his party in the 1970s and that they understood the problems of the area. However, now residents are demanding the project be completed as soon as possible or scrapped if they government cannot manage to speed up the pace of the work.

Presently, the project is nothing more than a couple of huge pits dug by engineers. According to residents, nothing has been done other than these holes being dug.

The Express Tribune spoke to commuters waiting for their buses at a bus stop in Orangi Town, where a women who identified herself as Kulsoom grew angry when asked about her thoughts on the completion of the Orange Line. “Hamari qismat me siraf gutter line hai, yeh neeli peeli lines sirf Lahore ka muqaddar me hain [Our fate is to be stuck with gutter line, there blue and yellow lines are just for the lucky citizens of Lahore],” she criticised.

A resident of the KDA flats near the Matric Board Office, Alam Nazeer Shah, told The Express Tribune that they had seen the pace of work on the Green Line BRT, which is a stone’s throw away from their area, and expected similar progress on the Orange Line project. Ever since work started it has created a mess in the area, lamented Nazeer, who added that most residents of the area take alternative routes home in the evening.

In a morbid tone, he said these are not huge pits but huge graves where the helpless citizens of the city should bury themselves, as the province’s rulers do not care about them.

Residents complain that all the localities adjacent to this project are covered in dust and the road network is totally broken. The scene, according to them, is akin to that of an earthquake-stricken zone that has also been hit by a flood.

The delayed work has also affected the nearby auto parts and mechanics market. A proprietor of a denting and painting workshop, Shoaib Bangash, said that their vehicle repair market is very large and is comparable to Plaza in Saddar. People from all over the city used to come here to have their vehicles repaired, he shared. However, Bangash said that many of their longtime customers, ones who had been frequenting their shops for the past 10 to 15 years, had begun going to other shops because of the road situation. Even I would not want to get a paint job done from an area covered in dust, he said.

Urban Resource Centre Director Zahid Farooq told The Express Tribune that there is no doubt of the fact that the lives of the citizens in the surrounding areas have been made miserable. Unfortunately, they have to live with these issues until the completion of the Orange Line BRT.

He added that if one compared the length of the project to the 21km Green Line BRT, the slow pace becomes even more evident. The pace of the project is slow, as it should be near completion but is not, he lamented, adding that it is a typical case of bad governance.

Farooq said there is no visible progress, as the state of the beginning of the Orange Line near TMA ground or the end of the line at the Board office is the same.

Talking about the health hazards presented by the project, Dr Saud Anwar, a senior general physician at a private hospital in Karachi, said that the risk of nasal and chest diseases is increased significantly due to the heavy dust particles in the air.

He added that it is obvious that heavy dust will become part of our lives if projects like these remain incomplete. Dr Anwar explained that the city has few trees, which usually filter dust particles. He advised residents to affix nets over their windows to avoid dust entering their homes and said motorcyclists and pedestrians should wear masks to avoid getting ill.

Transport Secretary Saeed Awan said that though the project was supposed to be completed in eight months after its initiation but sometimes problems with contractors occur with such large development works. He said they are confident the Orange Line BRT will be completed by March, 2018.

He added that they are aware of the problems being faced by the people, however, these projects are ultimately in the larger interest of the citizens themselves and once completed will provide relief to the masses.

A engineer of the consultants working on the Orange Line, National Engineering Services Pakistan (pvt) Limited, said Orangi is a congested area therefore they had several problems with the project, as some of the shop owners complained that construction created hurdles in the smooth functioning of their businesses.

He added that the Green Line, on the other hand, did not have these issues therefore it was progressing at a better pace.