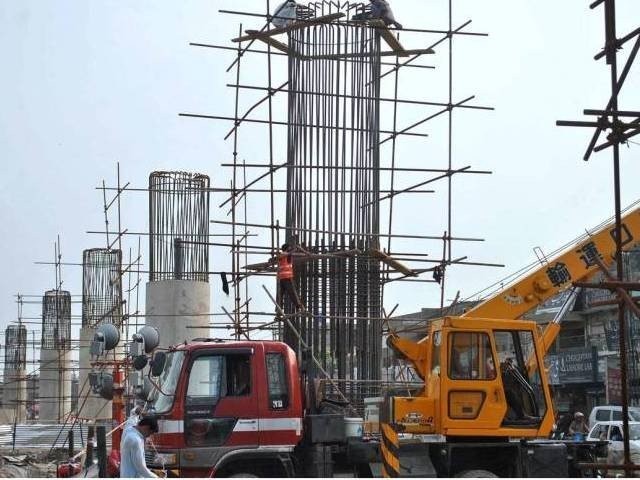 ISLAMABAD: The Punjab government may suffer a loss of billions of rupees due to delay in the completion of Rs45 billion Orange Line Metro Train project as a number of cases are pending against the project in the superior courts.

“The deadline for completion of the project is December 25, 2017, which is unlikely to be met due to pendency of cases in the superior courts. The Chinese government has also expressed concern over delay in the project,” a senior Punjab government official told The Express Tribune.

If cleared, Orange Line may be delayed by a year

Despite passage of more than four months, the Supreme Court’s five-judge larger bench, headed by Justice Ejaz Afzal Khan, has yet to issue judgment on the pleas of the Punjab government against the Lahore High Court’s (LHC) August 2016 order.

On 28 January 2016, the LHC issued a stay order and suspended all construction activities within the radius of 200 feet of 11 protected immovable antiquity and special sites.

The verdict was reserved by the SC’s larger bench on April 17. Interestingly, three judges in the bench –Justice Ejaz Afzal Khan, Justice Azmat Saeed Sheikh and Justice Ijaz ul Ahsan – were also the part of the bench that delivered its judgment in the Panamagate case on July 28.

Some lawyers believe that these judges had been busy in the Panamagate case for the last few months due to which the verdict was not issued. Now these judges are on summer vacations.

The official claimed that the project had suffered continuous delay on account of suspension of work near different heritage sites along the route of the project. However, apart from this case related to preservation of historical site, a number of cases of land disputes were also pending.

Sources said the Lahore Development Authority (LDA) had initiated process of land acquisition for the project under the Land Acquisition Act, 1894 to acquire land measuring 1013.75 kanal in 2015.

“As many as 158 cases were filed by different individuals against the land acquisition proceedings as well as amount of compensation announced by the LDA, out of which 148 cases have been disposed of by the high court, but 9 are yet pending,” said a source.

The Punjab government official claimed that the Chinese assistance of $45 billion earmarked for the China-Pakistan Economic Corridor (CPEC) projects might be jeopardised due to this delay.

“The whole gamut of Pakistan-China economic relationship can be subjected to a serious setback and it may send a wrong signal to all other bilateral and multilateral donors of Pakistan.

“The commitment charges of approximately $5 million will be imposed on Pakistan annually. Dispute in connection with the Loan Agreement, if not resolved through friendly consultation, shall be referred to the China International Economic and Trade Arbitration Commission (CIETAC) for arbitration,” he added.

He said the civil contractors had already submitted claims for delay or idling charges of machinery, equipment, manpower and escalation in prices of material and had requested to invoke arbitration clause to resolve these issues.

“In case of continued delay, the contractors have the option to terminate the contract which may result in additional construction costs due to increase in market prices of material and items,” he added.

The official said the delay was also a source of inconvenience to public in routine life. “It is causing continued loss to traders and shop owners on the route,” he added.

However, Azhar Sadique, counsel for the respondent in the apex court, rejected the Punjab government’s claim that the delay in the project was due to litigation.

“The contractors are incapable of completing the project within the time duration. There are many areas where there is no stay order but construction work has not been completed as yet,” he added.