Someone hacked a former NFL player's account to troll Pakistanis

Someone hacked a former NFL player's account to troll Pakistanis 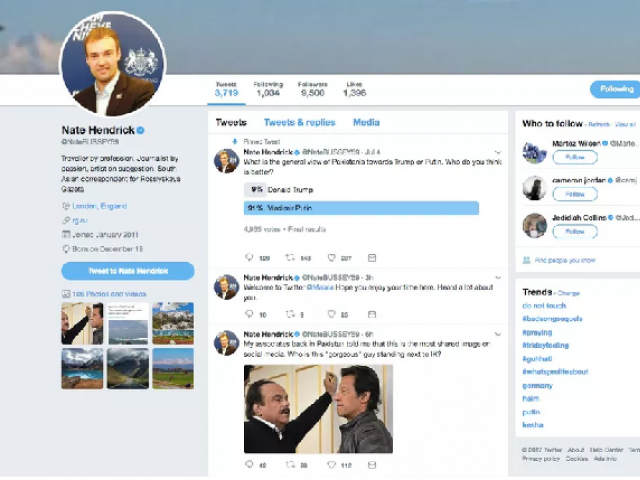 For a regular Twitter user, Nate Hendrick’s account seemed like a journalist who is an expert in South Asian politics. What followed later is undoubtedly surprising in all accounts.

PTI leaders duped by ‘Fatemi in China’ news, goof up on Twitter

Nate’s bio listed him as a ‘traveller by profession, journalist by passion, working as Rossiyskaya Gazeta’s foreign correspondent in South Asia.

The user amassed a following of around 10,000 and he was seen commenting comfortably on the local political scene of Pakistan. However, the only odd thing about all this was his screen name, @NateBussey59. Not much thought was put into this since the account was verified with a blue tick by Twitter.

Turns out, there is no Nate Hendrick. A month earlier, the account belonged to Nate Bussey, a former NFL linebacker and the actual owner of that Twitter account. Sometime earlier in July, the account was into and taken over by ‘Hendrick’.

The account offered a western perspective on Pakistani politics and was finally deactivated on Monday.

Google caches show that the real Nate Bussey was in control of the account before Hendrick took over. The profile photo was of Bussey in his Saints uniform with his bio listing the player’s publicist and representatives.

After the takeover, all those tweets were deleted, and Hendrick added a new photo and a new identity as a foreign correspondent. When Hendrick’s first tweets appeared on July 2, at least one bewildered Bussey follower reported the account, but the complaint seems to have had little effect, reported The Verge.

Over the next eight days, Hendrick tweeted more than 50 times on issues ranging from Iran’s Kashmir policy to CNN, adopting the tone of a bemused but naive observer with ties to Russia. He would comment on Pakistani landscapes and food, interspersed with criticism of Sharif’s role in the unfolding Panama Papers inquiry. One Twitter poll asked Pakistanis whether they preferred Vladimir Putin or Donald Trump; 91 per cent of respondents sided with Putin.

He also courted accounts of Salman Ahmed and earned more followers. Hendrick himself seems to have been a complete fabrication. The person in Hendrick’s initial profile photo was a fake, identified on Twitter as a marketing specialist from South Carolina.

It is still not clear who broke into the account but when asked by Bussey if he in interested in Pakistani politics he replied saying, “Not in a million years.”