PTI leaders duped by 'Fatemi in China' news, goof up on Twitter

PTI leaders duped by 'Fatemi in China' news, goof up on Twitter

ISLAMABAD: Duped by fake news or perhaps in an attempt to create one, PTI’s Shireen Mazari and Naeemul Haq tweeted on Tuesday an old picture of Tariq Fatemi along with PML-N members and national leaders in China. 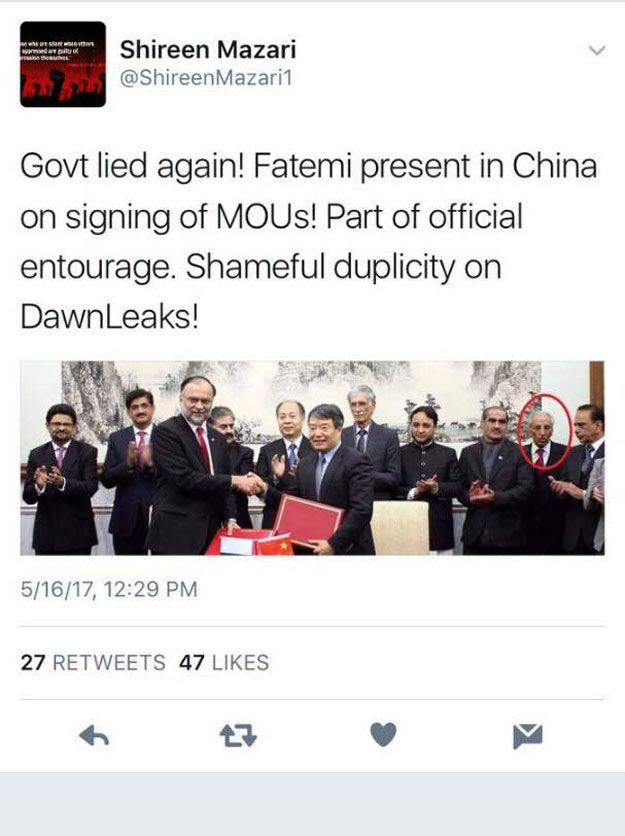 Haq went a step ahead, tweeting, “Nawaz continues to deceive the nation. Tariq Fatemi accompanies him in China. So his being relieved of his duties was a lie. What a farce.”

To make matters worse, prominent PTI leader Shah Mehmood Qureshi during a National Assembly session expressed his party’s reservations over Fatemi ‘accompanying’ the premier even after his dismissal.

The photo, in fact, was of an MoU signing ceremony held on December 30, 2016 in Beijing.

Fatemi, following the “settlement” of the Dawn leaks issue, was removed from his post of adviser to the prime minister.

“PTI’s reporting on Tariq Fatemi at worst seditious and diabolic or at best ignorant and incompetent,” the state minister tweeted.

PTI's reporting on Tariq Fatemi at worst seditious and diabolic or at best ignorant and incompetent pic.twitter.com/04P1KdVmi0

Aurangzeb also issued a statement saying, “old habits die hard,” and added that the PTI had a tendency to resort to allegations without first ascertaining the facts. PTI, she said, through such utterances, wanted to create division between state institutions.

The party should refrain from making statements based on misinformation, the minister maintained.

The minister also mocked party’s chief Imran Khan, saying “If PTI cannot teach its spokespersons on how to issue statements based on facts, the information ministry is ready to assume that role for the larger interest of the country.”

Meanwhile, when asked if the top aide accompanied the premier during the visit, Aurangzeb told The Express Tribune: “No he is not with him at all.”

When contacted, one of the senior PTI leaders, requesting anonymity, said, “It is unfortunate that some of our party leaders share news on social media without verification.”

Such acts, he added, only defame and bring shame or embarrassment to the party. “Even in the past, the political party faced a lot of criticism on similar actions,” he added.

Woman in Lahore swindled of millions by ‘husband to be’