PM seeks US good offices to heal rift with India

PM seeks US good offices to heal rift with India

In meetin­g with Kerry, Nawaz says he always reache­s out to neighb­ours for region­al peace
By Aamir Ilyas Rana
Published: September 20, 2016
Tweet Email 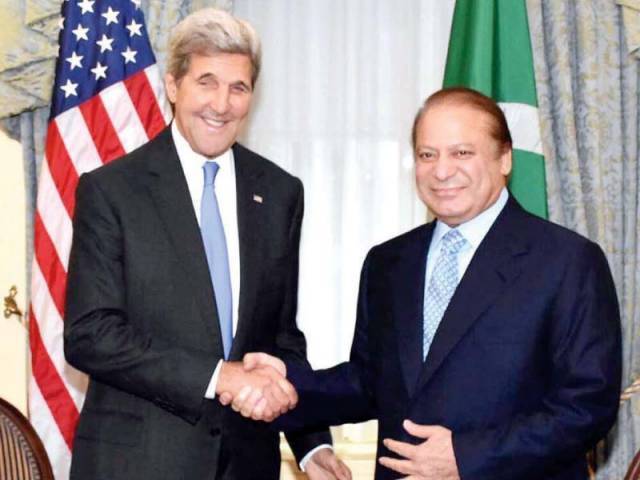 Secretary Kerry and Premier Nawaz shake hands before their meeting on the sidelines of the UN General Assembly session. PHOTO: APP

NEW YORK: Throwing the spotlight on rampant human rights abuses in Indian occupied Kashmir (IOK), the prime minister urged the United States on Monday to use its ‘good offices’ to help in resolving lingering disputes between Pakistan and India.

“I still remember former president Bill Clinton’s promise that the United States will play its role to help out in resolving bilateral disputes and issues between Pakistan and India,” Nawaz Sharif told US Secretary of State John Kerry during a meeting on the sidelines of the 71st UN General Assembly session.

“I expect the US administration and Secretary Kerry will use his good offices to help in resolving bilateral issues between Pakistan and India,” he added.

Over 80 people have been killed and thousands injured in violent protests that erupted in the disputed Himalayan state after Indian forces killed a popular separatist leader on July 8. Relations between the two bitter nuclear-tipped rivals, which were already strained since the start of protests in IOK, further deteriorated on Sunday when heavily-armed militants stormed an Indian army’s the brigade headquarters in Uri and killed around 17 soldiers.

Recalling his constructive meetings with US President Barrack Obama in the last three years, Sharif emphasised that strong relations between Islamabad and Washington have remained a mutual desire, adding that this partnership was critical to ensuring regional peace and stability.

He informed Kerry about Pakistan’s successes in the fight against counter-terrorism, particularly its gains in Operation Zarb-e-Azb, which, he said, has ‘broken the backbone of terrorists’.

“Pakistan has always fought terrorism as a moral obligation. I have always reached out to neighbouring countries for regional peace, stability and prosperity,” he said, adding that terrorists’ infrastructure has been dismantled and they are now on the run due to indiscriminate action against them.

“Implementation of the National Action Plan across the country is in full swing,” he said. “The national resolve against terrorism and extremism is unflinching.”

Kerry appreciated the efforts of Pakistan’s armed forces, security institutions and police in rooting out terrorism and extremism. He said Pakistan and Afghanistan have mutual interests in peace and security.

He also lauded the economic turnaround achieved by the present government and successful completion of the International Monetary Fund (IMF) Programme. He also appreciated Pakistan’s efforts in adding thousands of megawatts of power to the national grid through execution of various projects. “Pakistan’s efforts in growth and education are positive,” Kerry added.

Discussing the situation in Afghanistan, he expressed satisfaction over a lot of hard work that has been done under the Quadrilateral Coordination Group (QCG) process, of which both Pakistan and the US are members. Sharif also stressed the need for a meaningful engagement with Afghanistan.

Meanwhile, Sharif said Pakistan will continue to support the indigenous and peaceful struggle of the people of the IOK for the exercise of their right to self-determination morally, diplomatically and politically. “India should realise that it will have to immediately end human rights violations in IOK and must understand that will of the people has to be established,” he said while interacting with members of the Pakistani community upon arrival at New York.

Separately, addressing a high-level meeting on Large Scale Movement of Refugees and Migrants, Premier Sharif said Pakistan has served as a generous host to millions of Afghan refugees for nearly four decades, and this is the largest protracted refugee situation in the world.

“Even today, we are hosting over 2.5 million Afghan refugees and despite our modest resources, the people of Pakistan opened their hearts to their Afghan brothers and sisters,” he said.

He said while financial support from the international community has waned, Pakistan’s hospitality has remained unchanged, adding that Pakistan supported the safe and dignified return of all Afghan refugees to their homeland, in a sustainable manner.

Nawaz said Pakistan welcomed this historic meeting as refugee crisis is among the most urgent humanitarian challenges of the times.

“We take a momentous step today, by adopting the New York Declaration for Refugees and Migrants, we are reaffirming our commitment to refugee and migrant communities across the world,” he said.

He said the challenge now was to translate this noble initiative into reality, yet, he said, the true scale of this crisis lies beyond these headlines. “It is the developing countries, including Pakistan, that continue to be at the forefront of bearing the burden of large-scale global human displacements,” he added.

“We count on the active support of our Afghan brothers by the international partners in creating a conducive environment to achieve this outcome,” he said.