Nawaz will urge US presid­ent to use his influe­nce to stop rights violat­ions by Indian forces­
By Aamir Ilyas Rana
Published: September 19, 2016
Tweet Email 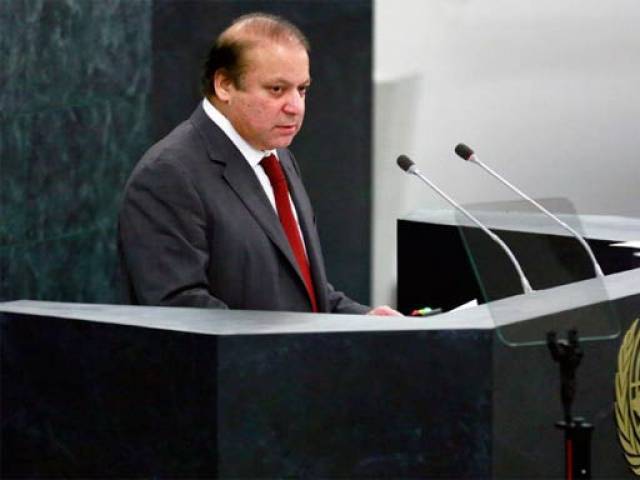 Nawaz will urge US president to use his influence to stop rights violations by Indian forces. PHOTO: REUTERS

Premier Nawaz, who arrived in New York to attend the 71st UN General Assembly session, will meet Obama on the sidelines of an international conclave on the refugees issue on September 20. He will highlight the challenges faced by Pakistan in hosting millions of Afghan refugees for the last three decades with little support from the international community.

According to sources, Nawaz will raise the use of brute force by Indian security forces against Kashmiri civilians in an attempt to subdue an uprising triggered by the killing of a popular Kashmiri separatist in July. More than 80 Kashmiris have been killed and thousands more injured since then.

Premier Nawaz will urge President Obama to use his influence to stop Indian atrocities in Kashmir. He will also refer to the recent statements of Indian Prime Minister Narendra Modi which vindicate Pakistan’s stance that India was fomenting trouble in Pakistan.

In his Independence Day speech, Modi spoke about alleged rights violations in Balochistan, and that he had received messages of support from Balochistan for speaking up on the issue. The US State Department has already said that Washington does not support India’s viewpoint on Balochistan.

Modi’s move was seen by foreign policy experts as an attempt to counter Pakistan’s aggressive diplomacy on Kashmir. Apart from Kashmir, Prime Minister Sharif will also highlight Pakistan’s efforts to ensure stability in the region, especially in Afghanistan. US Secretary of State John Kerry will meet Premier Nawaz at his hotel before his meeting with President Obama.

Premier Sharif will also address world leaders at a reception hosted by UN Secretary General Ban Ki-moon. He will express his country’s resolve to eliminate terrorism not only from Pakistan but also from the region.

In his other engagements, the prime minister will meet his counterparts from Japan and New Zealand, and presidents of Turkey and Iran.

Pakistan’s permanent envoy to the UN Maleeha Lodhi said that since Prime Minister Sharif has scheduled bilateral meetings, he might not interact with the Pakistani community in New York.

The prime minister’s top foreign policy aide Sartaj Aziz will highlight the Kashmir issue in a meeting of the Contact Group of the Organisation of Islamic Cooperation in New York.
Published in The Express Tribune, September 19th, 2016.