Artist­s say they wanted to show the unfini­shed storie­s of the APS victim­s
By Sunehra Mehmood
Published: December 18, 2015
Tweet Email 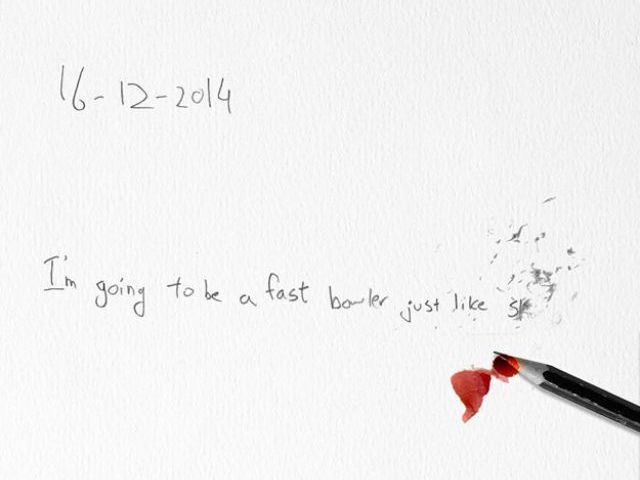 As the country mourns the loss of innocent children who died last year in the country’s worst terrorist attack to date, three Pakistani artists teamed up to pay a touching tribute to the young lives whose dreams were so brutally extinguished.

Shahrukh Ali Mirza, Areeb Khan and Faisal Nasir came together to create heart-rending posters depicting what the Army Public School students may have been writing before they were gunned down. The posters are poignant as the children’s messages are interrupted midway, just as their lives were. “We thought unfinished stories was the best way to communicate the fact that these were all kids who had plans for their future and their futures were erased away.  The process of making these ads was also very emotional for us,” Nasir told The Express Tribune.

Mirza explains that they felt an obligation to talk about the APS tragedy and get people to think how everyone as an individual could do their best to ensure something like this doesn’t happen again. “The fundamental question a year later remains: Why is there so much hate/ divisions everywhere and what can be done to address this issue?” Mirza said, adding that Abdul Khaliq Butt, an Urdu copywriter, also needs to be credited for the work.

For Peshawar: In honour of the 147 victims of the Army Public School attack Further, Khan, who is hoping to release a graphic novel in the future, said their art is meant to serve as a reminder to people of the tragedy that occurred a year ago. “We really wanted to make a piece of communication that would keep the tragedy in people’s minds and give a message that would urge people to take some action. Hence the line ‘Make extremism history or become history’.”

“While we should remember APS we should also NOT forget the thousands of Shias, Ahmedis, Hindus, Christians and other minorities that have been killed and face persecution as we speak,” Mirza added. What is needed to end terrorism in Pakistan? The three, who work for an advertising agency in Islamabad, stressed on education. “People need to be educated and enlightened so that if some bigot tells them that things are a certain way they can think for themselves and question what they are being told,” Khan said.

Nasir, who wants to keep on working on projects that get people to think, concurred. “Education. And not just the education taught in our public schools. A revised curriculum that teaches kids to view everyone as human beings.” Mirza lamented the destruction that terrorism had heaped on the people of Pakistan.  “Terrorism has almost finished the way we live our lives in Pakistan. We are essentially fun-loving people with a huge love for cricket, politics and music. For every disenfranchised youth that picks up a gun (because of poverty ; disillusionment with the system) we must ensure there’s 2 people who pick up pens.”

The three also have a special message for budding artists. Khan advises youngsters to always to make art that comes from the heart. “Your work and the demands of the marketplace may dictate your art because after all we all have to survive. But you must take any opportunity you have to make meaningful art that comes from the heart,” Nasir added.

While Mirza, who plans to work on ideas that address social taboos, urged artists to make use of social media. “If they are being restricted in communicating their ideas on a commercial platform then they should use the power of social media to put their message across on a personal level.”