"When I saw that my four best friend­s were dead, I fell to the floor and finall­y lost contro­l of my emotio­ns..."
By M Bilal Lakhani
Published: December 14, 2015
Tweet Email 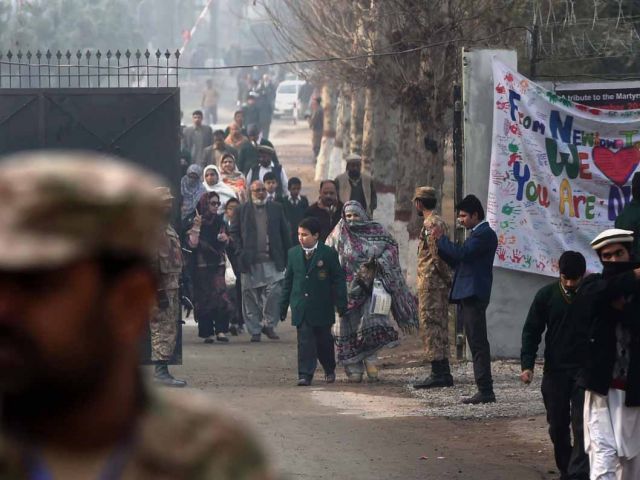 “He shot at me seven times,” shares Aakif Azeem, as he revealed a play-by-play account of the school day which changed his life forever. “I was in the toilet at around 10.30am when I first heard gun fire. There’s a marriage hall near our school, so I thought the firing might be coming from there. But within a minute or two, the firing got really louder. When I stepped out of the toilet, I saw him for the first time. He was wearing a blue shalwar kameez, a brown sweater and a cap. He had an AK-47 in one hand and a pistol in another. I tried to run for cover behind a pillar and he shouted in Pashto asking me to stop. I knew that was the end of it. I froze with fear.

“Three bullets hit the pillar,” shared Aakif. “That’s when another attacker asked the one shooting in my direction to follow him to the auditorium nearby, as there were more children there. The attacker shot four more times, missing the pillar and hitting the wall across. Then, he left for the auditorium. I re-grouped myself and went to a nearby class room, 7-B. The class had over 20 children and a female teacher. We barricaded the door and huddled in the centre of the room, away from the door and mirrors. Around 11am, the firing became extremely loud before it tapered off. The doors of the auditorium were opening and I could see eight to 10 bodies in the corridor. It was a scene from a horror movie with zombies walking around. Some of the guys were shot on their mouth. Some had their jaws open. Someone was holding their arm. Three boys died in front of me. That’s when I realised my brother was in the auditorium too. But it wasn’t clear to me what I should do next.”

With the attackers appearing to move on from a particular area of the school, Aakif went towards his own classroom. “I saw our chemistry lab assistant dead on the floor,” he shares. “The next person I saw dead was Mehr, one of my closest friends. I pulled his body into the washroom. Next, I saw my Urdu teacher, who asked if I was okay. I said yes, but this was the last I saw of her. When I reached my class, all I could see was blood but no bodies. I thanked God because I thought all my friends had escaped. It was much later in the evening when I would find out what actually happened to my best friends.

“I moved back into class 7B and all of us huddled together, waiting to be rescued,” he shared. “We heard gunshots again, lots of voices and a thud. Then there was silence, except for a young boy’s voice asking for help near the door of the class. When we opened the door, we realised that he had been hung by his own sweater. I still remember his words: “Kash mujhey bhi koi bacha leta.” He had been shot three times already and was bleeding profusely. One of the bullets had gone through his chin. It was obvious that he wasn’t going to survive but I tried to stop his bleeding with my shirt as I was a pre-med student.”

A year on: City pays tribute to APS martyrs

Soon after, Aakif and others huddled in the classroom were rescued by the Pakistan Army and he found out that his brother was safe too. But this was only the beginning of the terror that he faced that fateful day on December 16, 2014. As reports came in of over a hundred dead, Aakif rushed to the hospital to check on his friends and classmates. “When I first saw the list of casualties,” he shares, “I recognised that my classmates dominated the list from number 13 to number 40. When I saw that my four best friends were dead, I fell to the floor and finally lost control of my emotions. That’s when everything hit me. I would never be the same man again.”

This is the first in a three-part series on Aakif’s story in his words. The second and third parts of his story will appear tomorrow and the day after in this space. Extraordinary Pakistanis seeks to find and share inspirational stories about everyday Pakistani heroes (if you know someone who should be profiled, send us a Tweet @Mbilallakhani). If we don’t share these stories about Pakistan, no one else will.

The liability of higher education