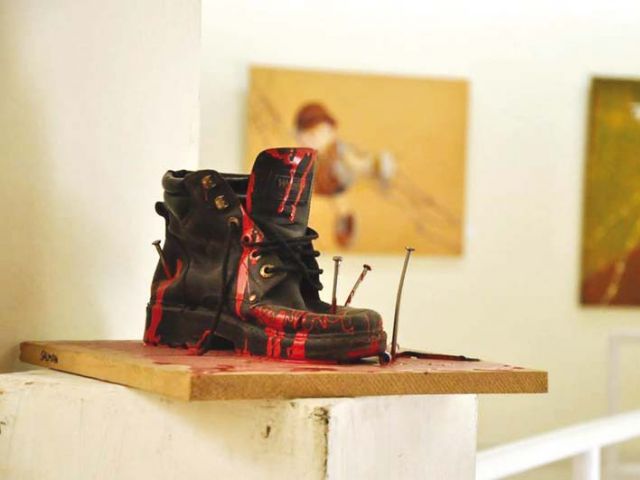 Salman Khan has used his canvas to express his pain and anger over the Army Public School massacre. His paintings and instillations convey a message of peace and serve to condemn the militants for the heinous attack.

“The December 16 tragedy was heart-wrenching and everyone condemned it,” said the 27-year-old artist. “Poets have written poems, musicians have composed songs and artists have painted to remember the day of the carnage and condemn the militants.”

He added, “Words cannot express pain in the same way as art can.” Salman, who makes sculptures as well, said his work is direct and uncomplicated.

For one of his artworks, he used the jacket and shoe Mohsin Murtaza, one of the victims, wore on the day he was mercilessly killed in the attack. Salman gained access to these things through a friend of his who knew Mohsin’s parents.

“This work is for all those children who were killed on December 16,” the artist said. “The terrorists attacked our generations,” he said.

About his work, he said, “I have tried to depict the plight of APS students and teachers. We have to stand united as a nation to promote education.”

According to Salman, the wounds of APS carnage are still fresh in his memories.

When girls education takes a backseat