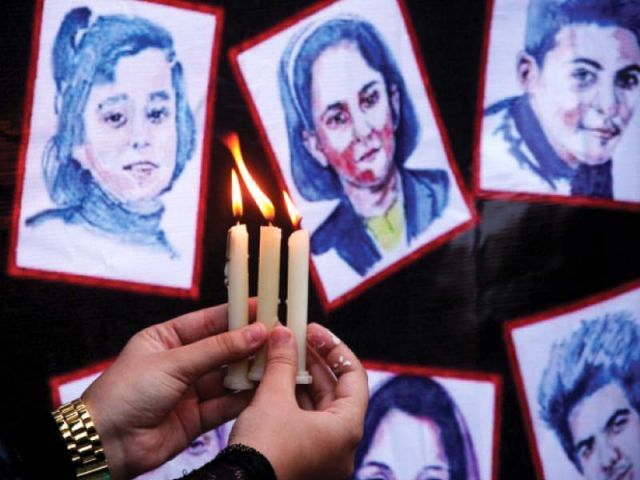 It was on this day last year that terrorists struck the most unkindest cut of all. One hundred and twenty-two children and 22 staff were methodically killed in a sickening Taliban rampage at the Army Public School in Peshawar.

The appalling massacre shocked not only the Pakistani nation but the whole world, and prompted a paradigm change in the country’s counterterrorism strategy.

APS attack anniversary: A tribute to the victims

The nation will observe the first anniversary of the gruesome assault on Wednesday (today). Educational institutions across the country, both private as well as state-run, will remain closed while events will be organised to commemorate the victims.

“Invitations to leaders of all political parties have been sent out, and all of them are expected to attend,” Special Assistant to K-P Chief Minister on Information and Higher Education Mushtaq Ghani told a news conference on Tuesday. “The incident united the whole country and the political leadership will show this again on Wednesday.”

He said the provincial government would rename the Archives and Library as ‘Shuhada-e-APS Library’. An event would be organised at the library in the afternoon where belongings of the martyred students would be displayed by their parents. A Yadgar-e-Shuhada (monument for martyrs) would be inaugurated.

On the eve of the first anniversary of the APS attack, Pakistani and international leaders paid glowing tributes to the victims and reiterated their resolve to fight the menace of terrorism.

Acting President Raza Rabbanihas said the appalling attack on the APS Peshawar did not deter the nation’s resolve instead it breathed a new life into national unity and solidarity.

“Let us reaffirm our commitment that the blood of innocence would not go in vain as we, as a nation, trounce the evils of terrorism and extremism and earn our rightful place in the comity of nations as a peaceful, prosperous, educated and a civilised country,” he said in a message.

PPP co-chairperson and former president Asif Ali Zardari called for ‘effective and full implementation’ of the National Action Plan against terrorism and extremism.

“Such implementation is necessary so that the sacrifices rendered by these heroes and heroines and the nation do not go in vain,” he said in statement issued by his party.  He called for an ‘honest assessment’ of the abysmal failures and ‘ruthless accountability’ of those who have failed in the NAP”.

Punjab Chief Minister Shahbaz Sharif said the martyrdom of innocent children and teachers at the APS shocked the entire nation and “it can never forget this heartrending tragedy”. “The entire nation has united in the war against terrorism and a decisive war has been started for purging the motherland of terrorists,” he said in a message.

“Terrorists have been weakened due to Operation Zarb-e-Azb and National Action Plan,” he added. He vowed that the government would not rest content till elimination of the last terrorist.

The United Nations said it stood with the Pakistani people in commemorating the APS victims. “We convey our deepest sympathy to the survivors, victim’s parents and families whose lives have been brutally and irreversibly shattered,” it said in a statement.

British High Commissioner in Islamabad Philip Barton said his country stood shoulder to shoulder with Pakistan as it tackles the scourge of terrorism.

“We remember the sacrifice of all those killed in this horrific act of terrorism, in particular, those young people cut down in their prime. We salute the courage of their parents and families who continue to suffer,” he added.

(With additional input from wire services)