The people of Faisalabad enjoy tent-pegging, polo and horse riding but they lack the facilities The people of Faisalabad enjoy tent-pegging, polo and horse riding but they lack the facilities. PHOTO: ZAHOORUL HAQ
FAISALABAD:

Talking to newsmen, Mengal said the stadium was being built in collaboration with the Faisalabad University of Agriculture.

Earlier, the DCO visited the construction site and inspected the quality and pace of construction. The DCO said the stadium was a much needed addition to sports facilities in the district.

“The people of Faisalabad enjoy tent-pegging, polo and horse riding but they lack the facilities,” he said.

He said a hostel with a capacity for 300 people would also be constructed. He said stables had also been built. The DCO said the stadium would be completed by October. He said the district administration would arrange competitions in the inaugural week to encourage residents to visit the stadium. 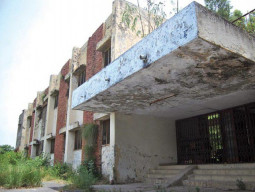