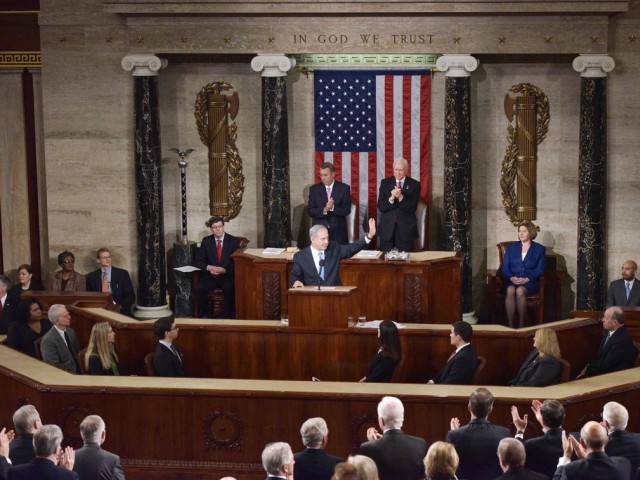 Israeli Prime Minister Benjamin Netanyahu waves as he recevies a standing ovation in the US Congress. PHOTO: AFP

Prime Minister Benjamin Netanyahu of Israel made an address to the US Congress on March 3, with his speech being broadcast worldwide. His visit to the US was unusual in several respects. He was there at the invitation of the Republican Party, and not the administration of the (Democrat) President Barack Obama. The leader of Congress did not even have the courtesy of informing the White House before extending the invitation, which had annoyed President Obama considerably. The Republicans had called Mr Netanyahu to use him in their battle with the Obama camp in such a way as to undermine the ongoing talks with Iran regarding its nuclear programme. Indeed, on the same day that Mr Netanyahu made his speech, Secretary of State John Kerry met with his Iranian counterpart as part of the ongoing attempt to limit the possibility of Iran building a nuclear weapon.

Mr Netanyahu was blunt, stating that Iran should have no nuclear industry or capacity at all, and allowing it to have such would only lead eventually to nuclear war. He also said that Iran is a threat not only to Israel but to the rest of the world as well. It was a position statement that was far from nuanced. What Mr Netanyahu in essence displayed was his country’s hypocrisy. Israel has never had qualms over building up its own nuclear capabilities. It has frequently resorted to bombarding Gaza and neighbouring countries, ostensibly for self-defence purposes, but only succeeded in killing thousands of innocent people, including hundreds of defenceless children. While completely ignoring its own provocatively criminal activities, Israel’s opposition to Iran’s nuclear programme only demonstrates its double standards. Iran maintains that it has every right to develop a nuclear industry. Israel developed a nuclear weapons capacity in secrecy, and maintains a considerable nuclear arsenal. The nuclear flashpoint remains in the Middle East, and Mr Netanyahu has done none of us any favours.